SoftOrbits Stencil Maker Software Download for Free. Convert all of your own pictures into line stencil sketches with only a few simple clicks. 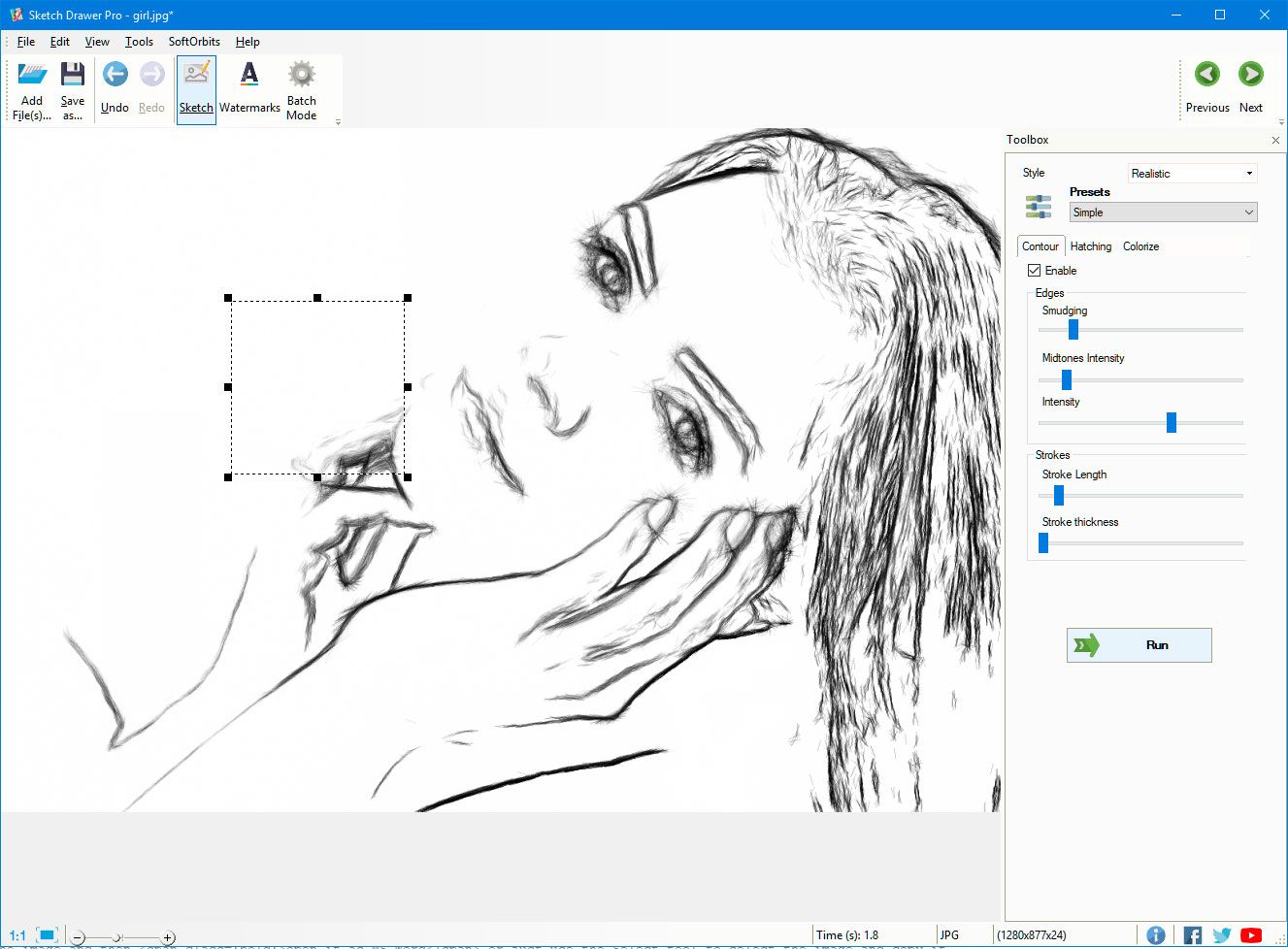 Stencils have been a very common form of printing and making art since the old ages. Many people make stencils and fill them with beautiful designs. For this, people in the past used to draw by hand or trace original models to create an accurate stencil. However, nowadays with the advent of technology, people can simply download images from the internet and make stencil of the images by hand.
An even more advanced method has been introduced by developers. They have developed a software that converts any image that you want directly into a line stencil with Picture Stencil Maker Software. You just need to upload the image you want and the software will do all the rest.

There are many tools and software that developers have created to easily convert any uploaded pictures into stencils. These stencils can then be downloaded and printed so that you can create beautiful art with it. These stencil making software are easily available in the market and can be downloaded from any platform to be used by the users.
With the Picture Stencil Maker Software can easily make your own stencil from a picture with just a few simple clicks. These tools are not only downloadable but some online versions are also available in which you can just open the website and make stencil from a picture. 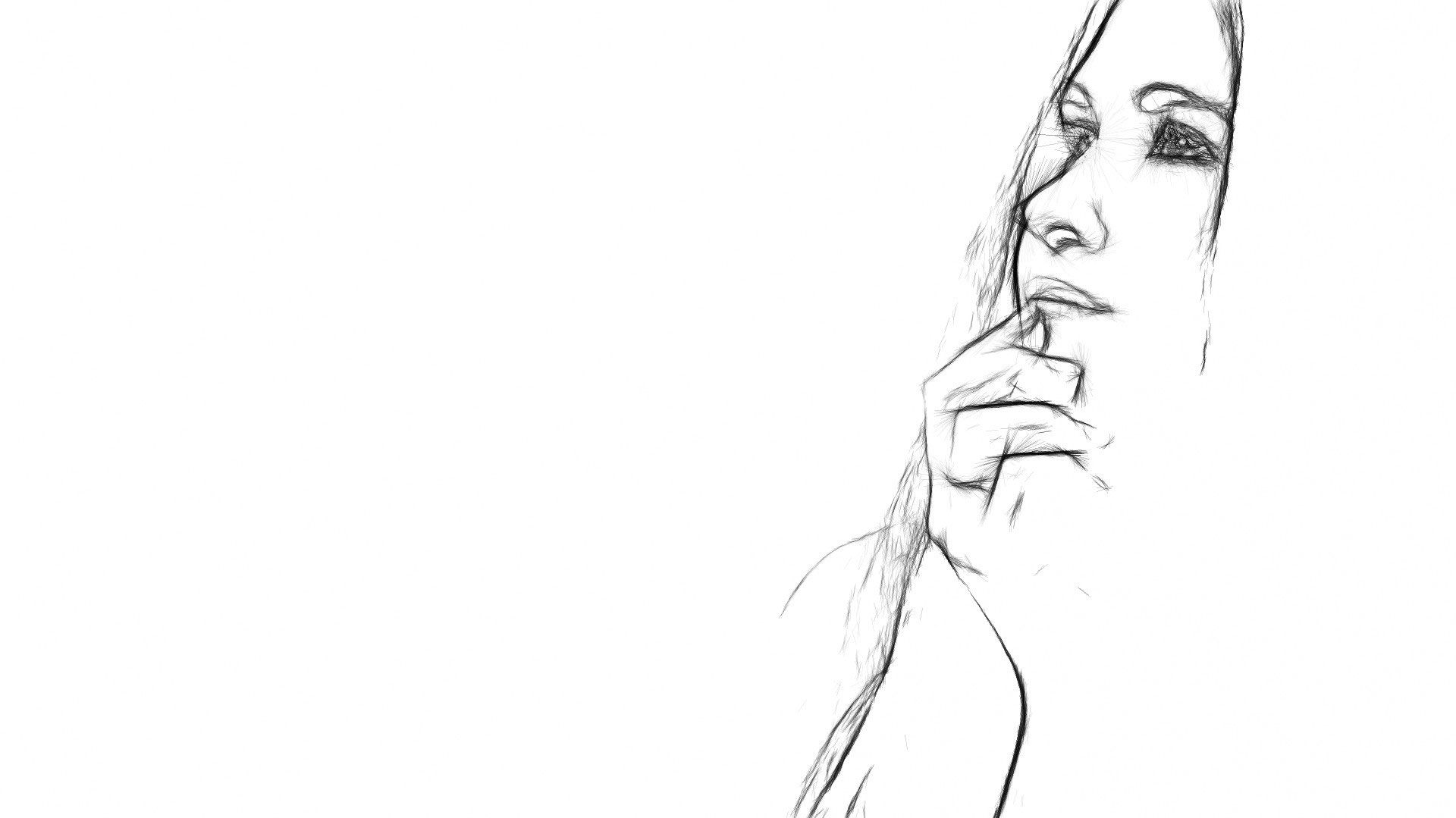 Photo to Sketch Converter is the best stencil software out there that can be used to create stencils. It is intuitive and has algorithms that convert any image easily to beautiful stencils and majestic artworks. You do not need to have any knowledge about graphic designing to make such images. You just have to upload the image and then with a few simple clicks, the picture will be converted to line stencil.
There are many presets you can use which have their own unique characteristics. They include Classic, Detailed Sketch, and Realistic. The software also allows you to add your own watermark or logo after converting the image to avoid plagiarism.
The software also has Batch processing mode in which you can add multiple images and apply filters to all of these images at once. This saves a lot of time and energy.

SoftOrbits Picture Stencil Maker Software is the best tool out there for making stencils and creating beautiful artistic pieces. The other reason why this is a customer favorite is because it is extremely easy and intuitive to use. With just a few simple clicks, you can get the desired result.

How to Make a Stencil from a Photograph

To use the software, you have to follow the steps given below. 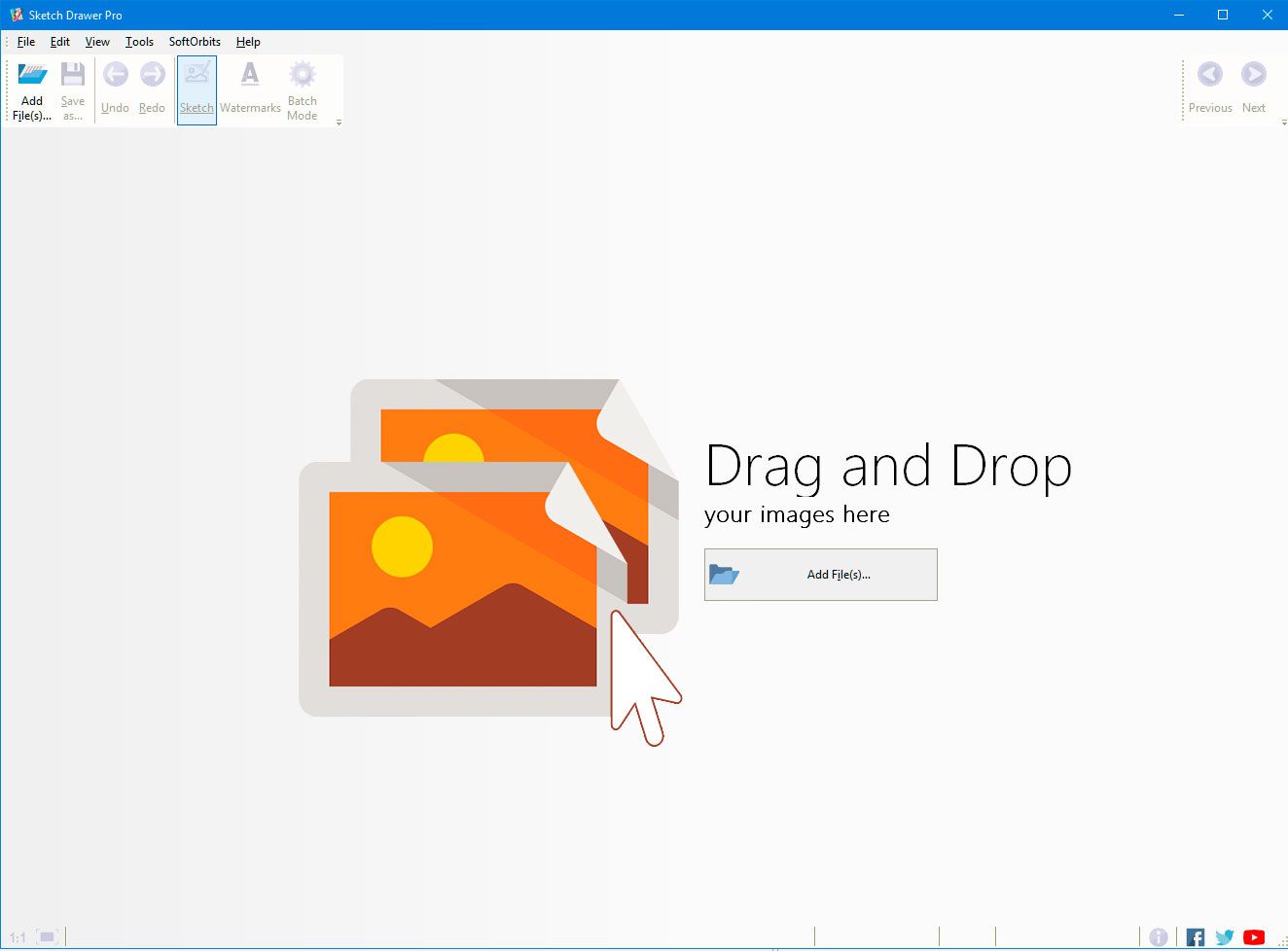 Open the software and click on the Add Files button. You can upload any picture you want from your computer. 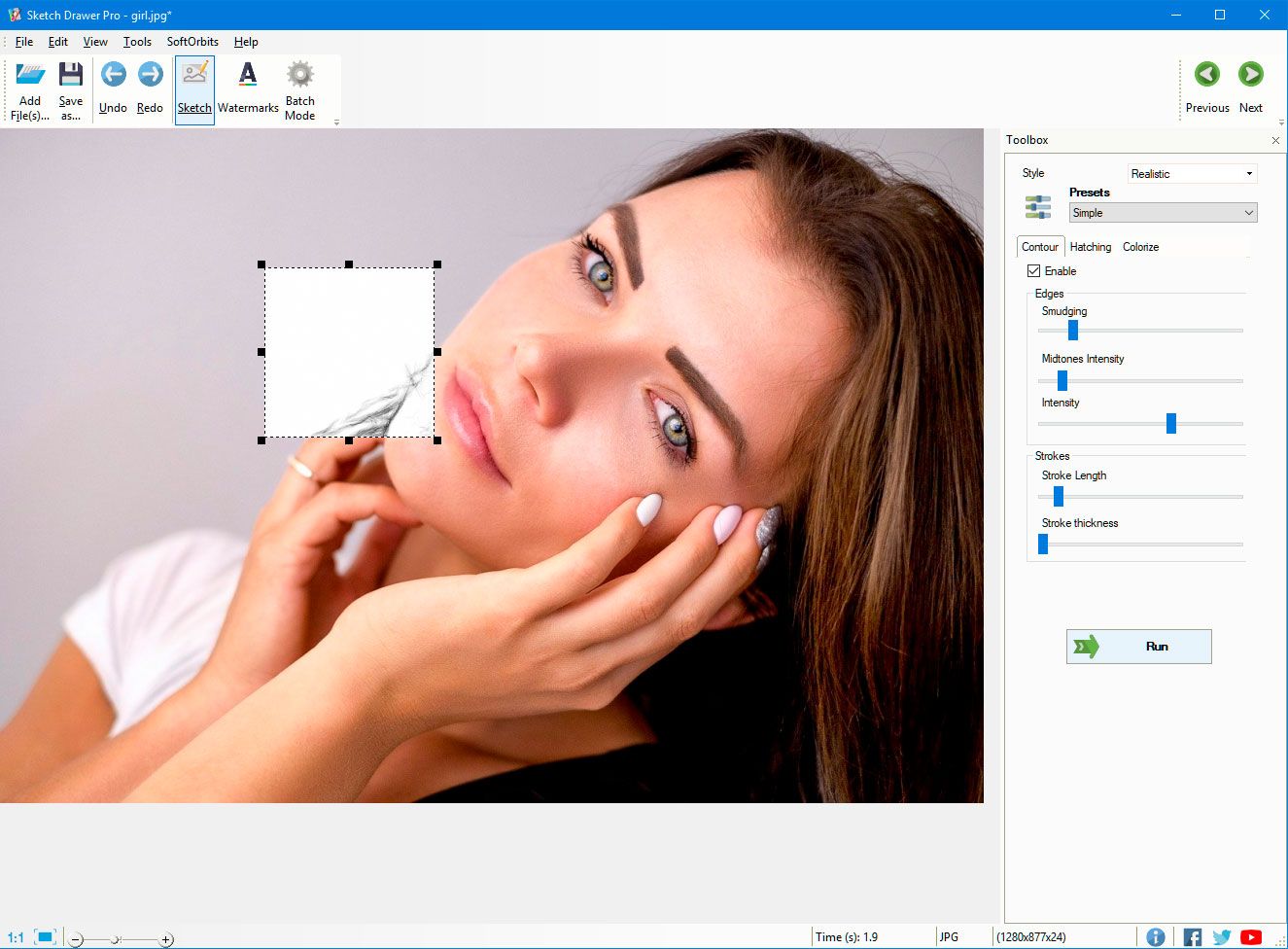 From the presets, select the one you want. You have the options of Classic, Detailed Sketch and Realistic. Check the preview. You can change it anytime you want. 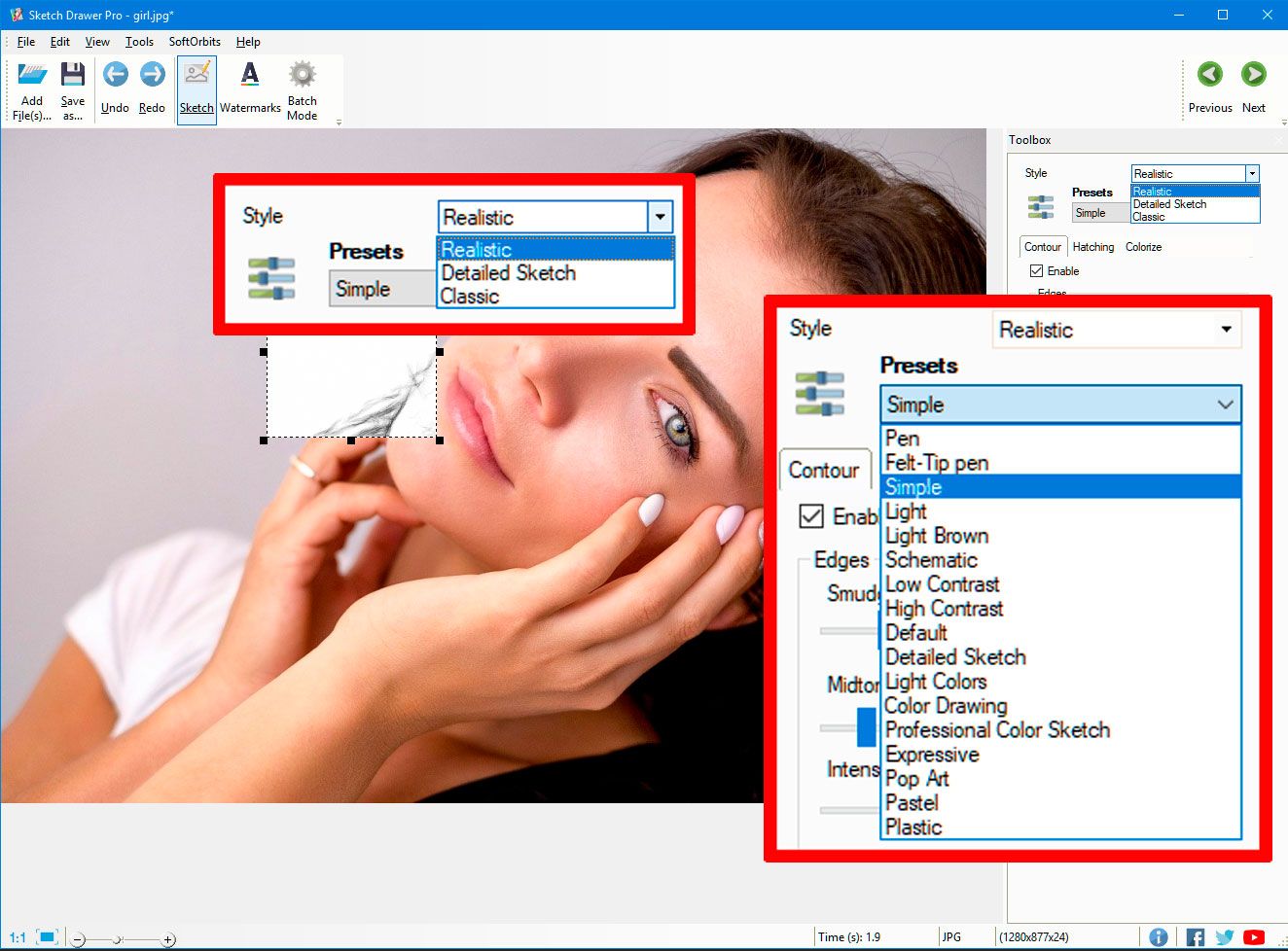 There are Sketch Settings given with which you can further perfect your image. These options include Colorization, Hatching and Contour options. 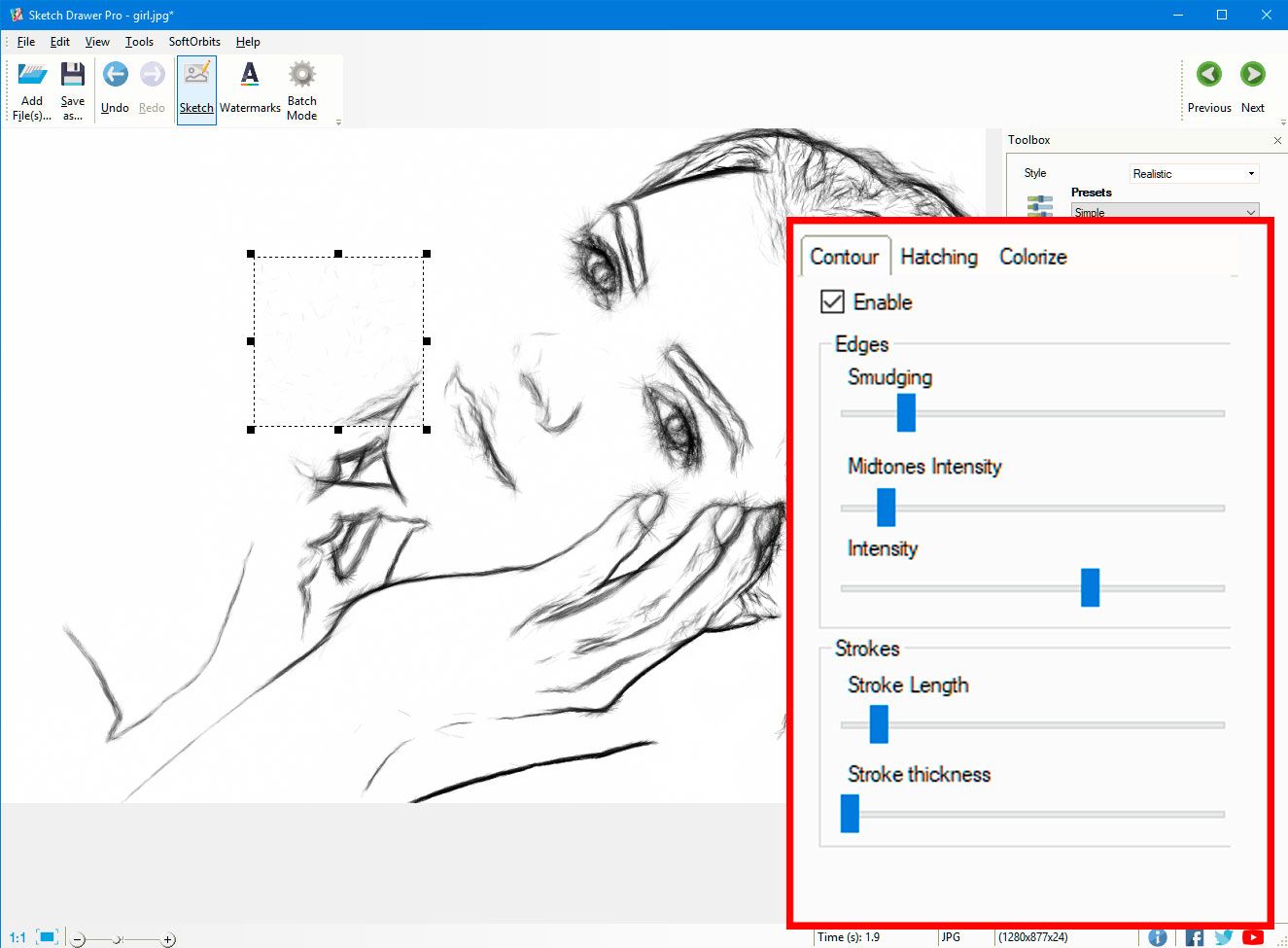 You can Undo any of the additions you have made to the image. After that you also have the option of adding a watermark or logo.

When you are done and satisfied with your result, you can download the image.

There is also a Batch Processing option with which you can add multiple images at once and apple settings to all of them.

How to Make a Stencil from a Picture without Photoshop

There are many graphic designers who opt for Photoshop when they have to do tasks related to image manipulation. However, the Photoshop software is heavy and many people do not have the skills and knowledge of using Photoshop.
But no need to worry, there are many other ways with which you can use the tools already downloaded to your computer and use them to create a stencil. The method is given as follows:

How to make a stencil from a picture (Step-by-Step)

Download the image you want from Google.
Open the picture in MS Paint. 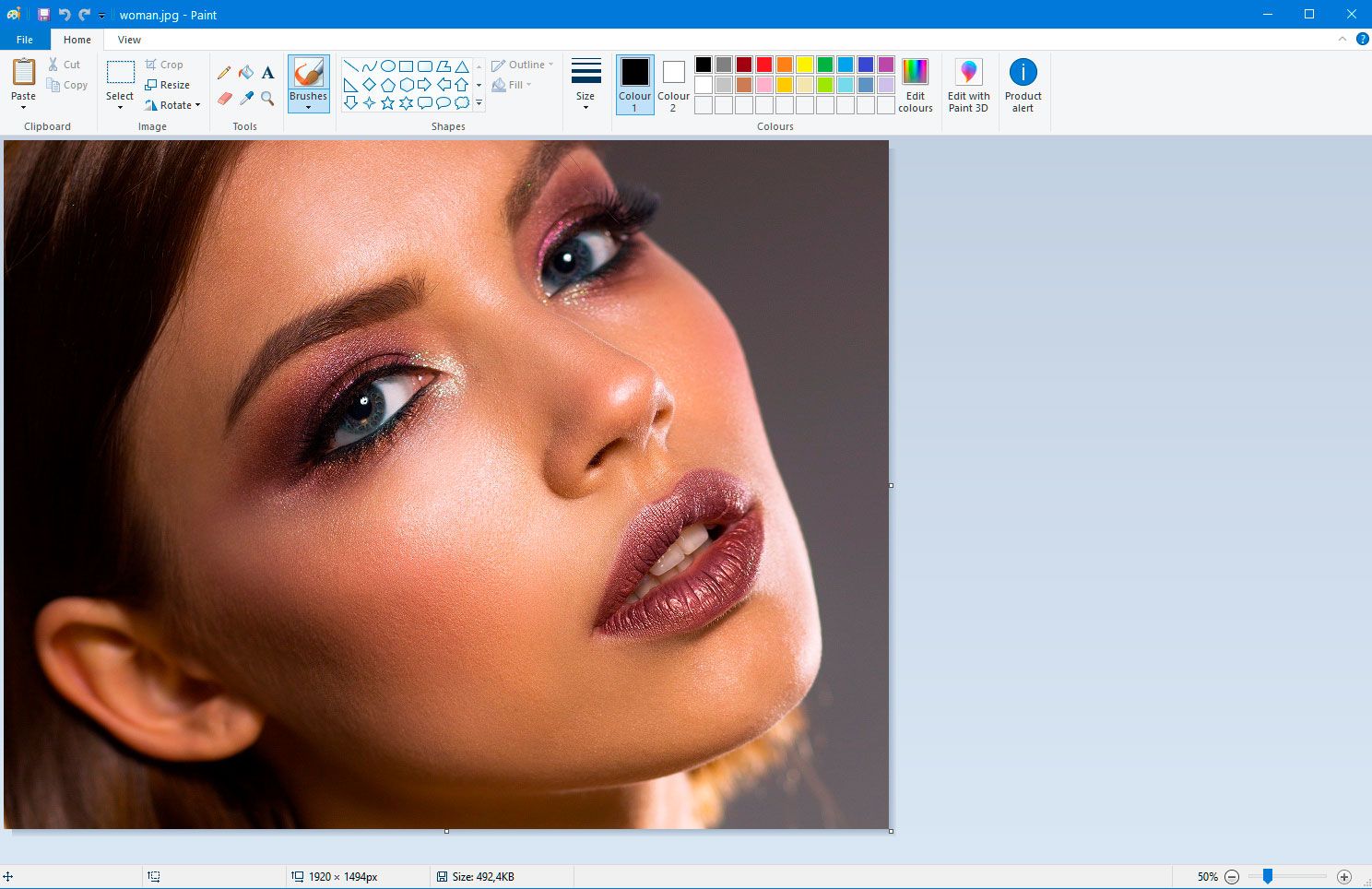 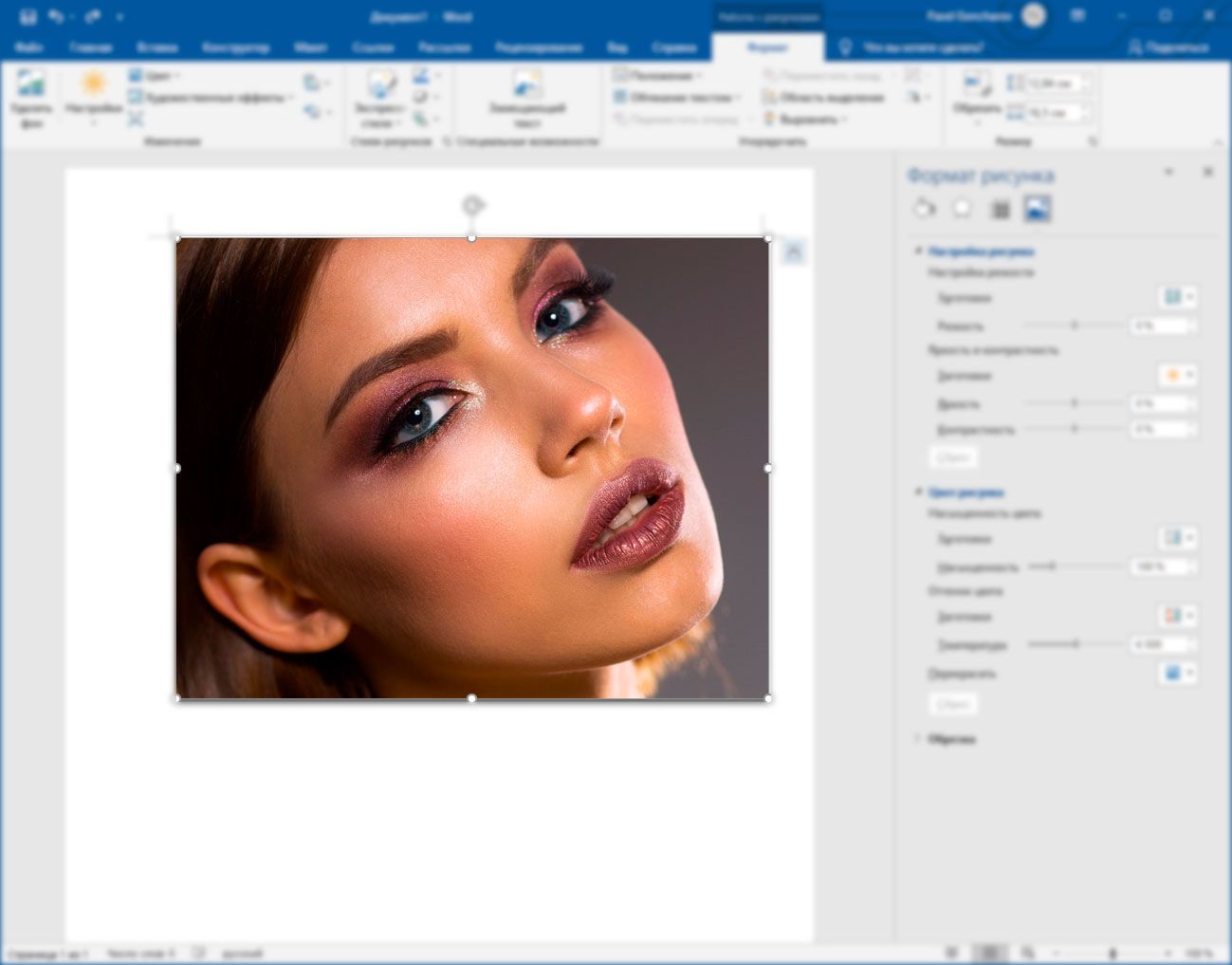 Right-click on the image and from the option select Format Image.
A dialogue box will open. From there, change the color scale to Grayscale and the Contrast to 100%. You can also change the brightness if you want. 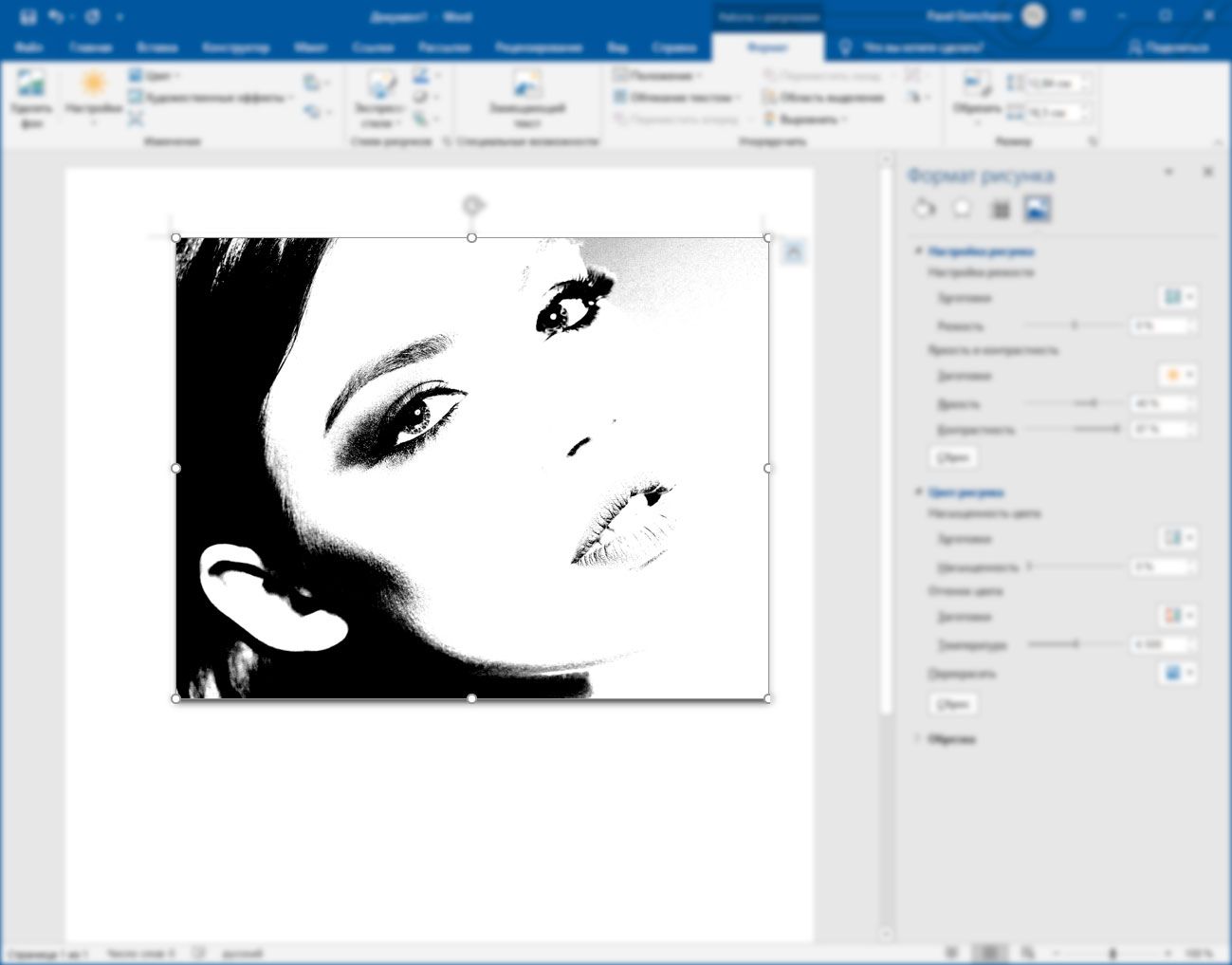 After you are done, Save the image. Here is how to make stencil from a picture without Photoshop.
Download for Free

How to make a stencil from a photograph in Photoshop

Photoshop is the most advanced and widely used image manipulation tool that many graphic designers use all over the world. You can easily convert photos to stencils with Photoshop. There are many advanced options that users can use to get a professional sketch by using Photoshop.
The method of using Photoshop for converting photos to sketches is relatively easy. You just fave to follow the steps given below:

Download Photoshop and upload the image that you want to convert. 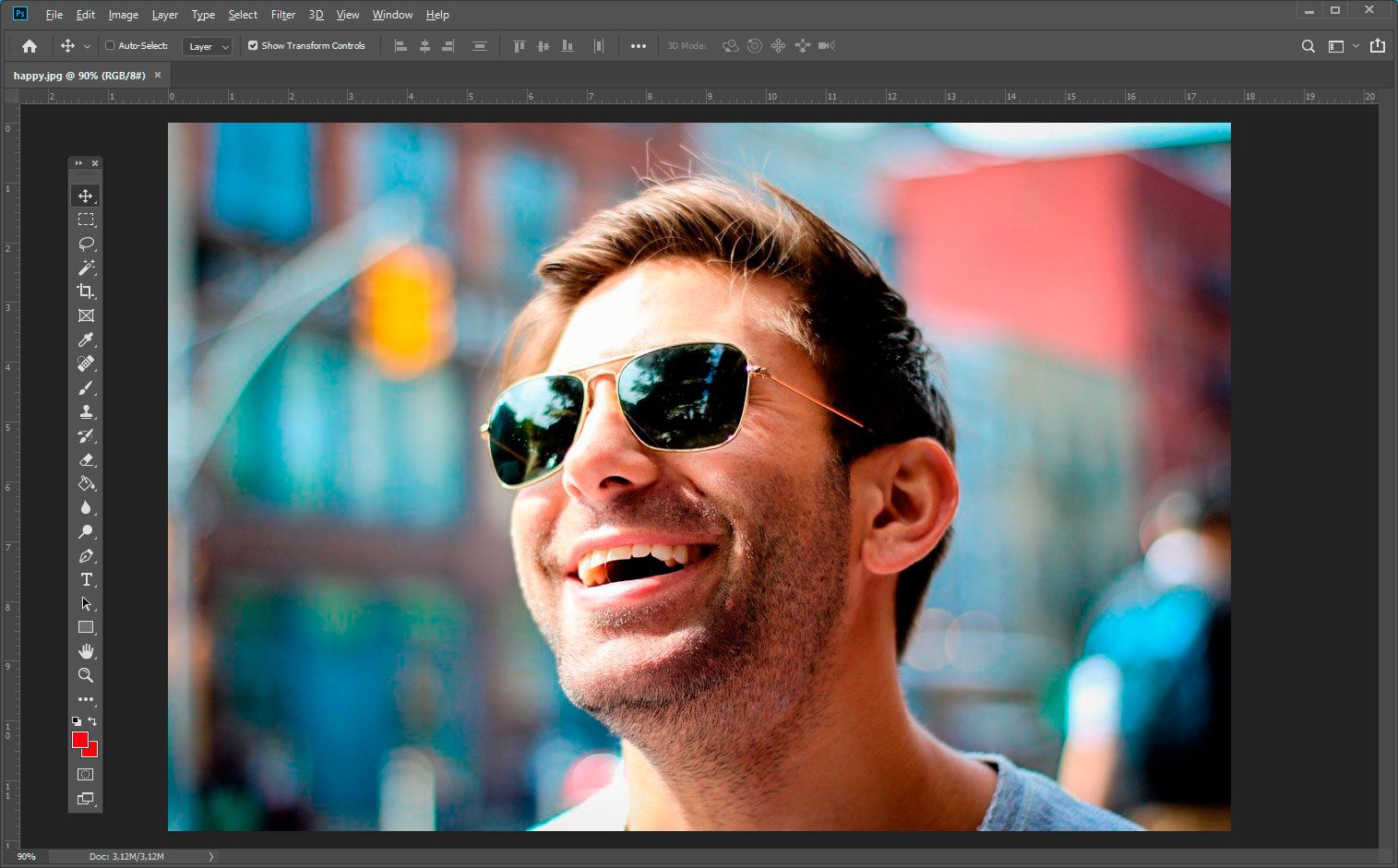 From the menu bar, go to the Image option, then Adjustments and from there click on Threshold option. This will change your image to black and white. 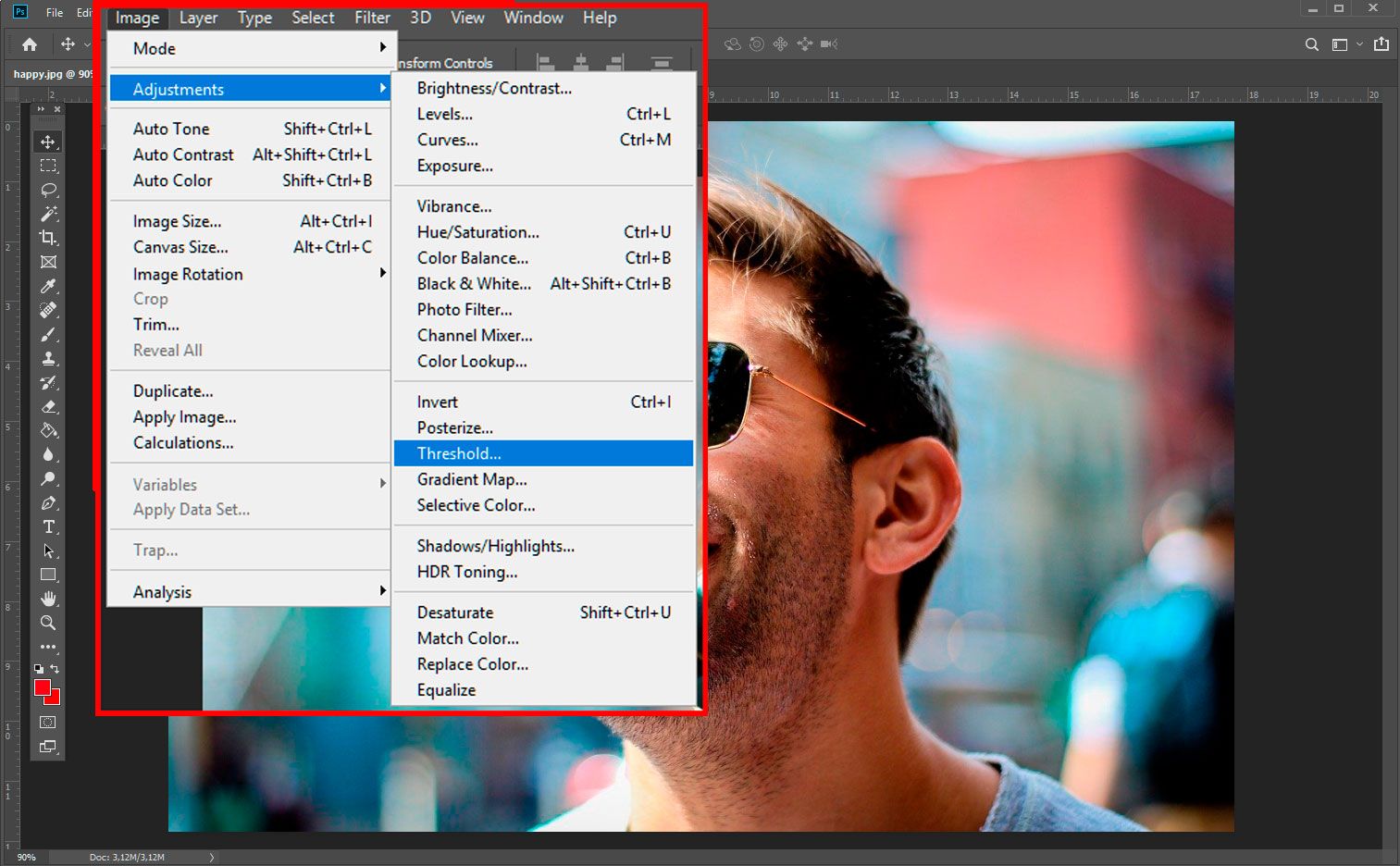 Use the slider to get the level of details that you want. 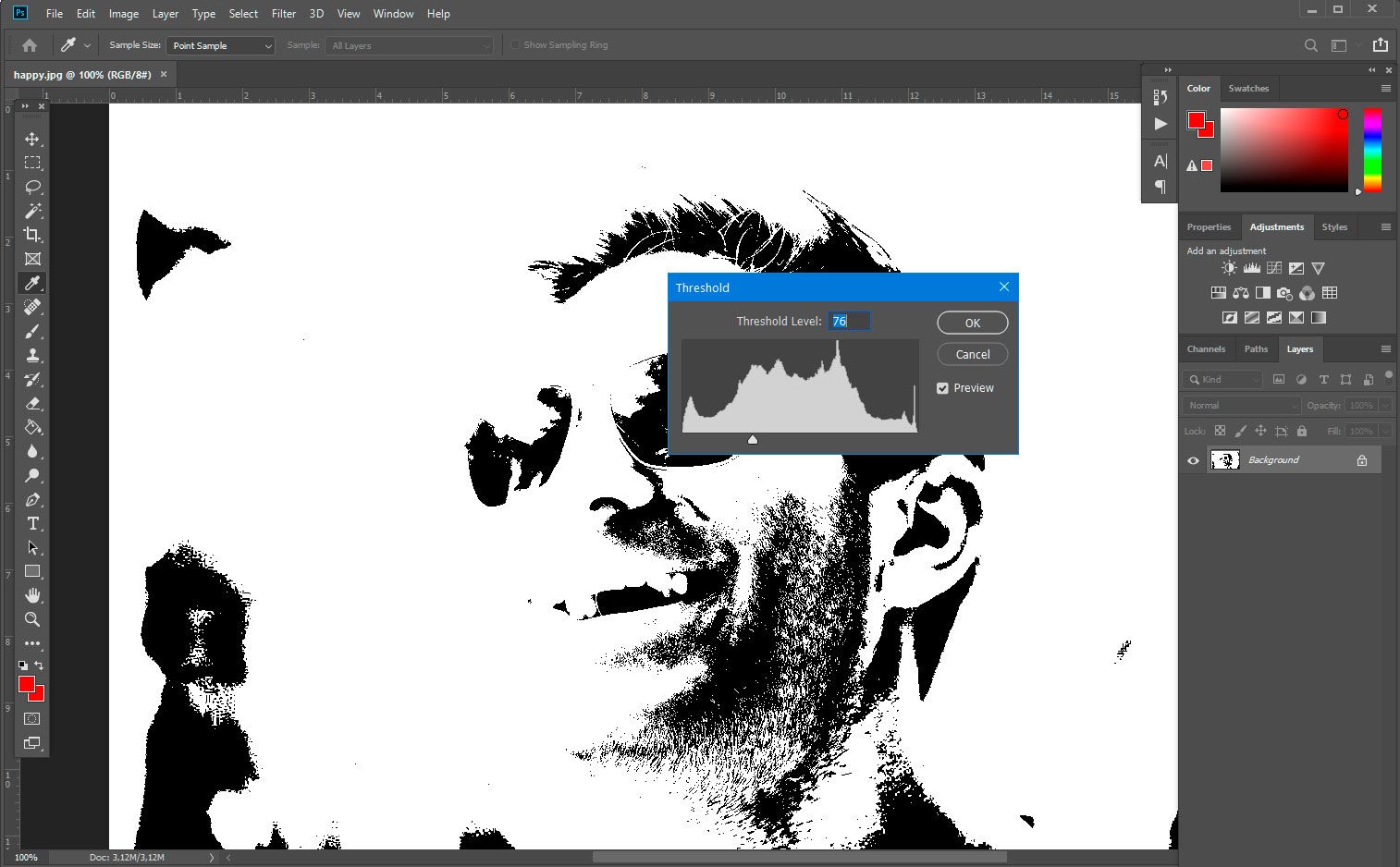 After that, use the brush tool or Select tool to get rid of background details that you don’t want. 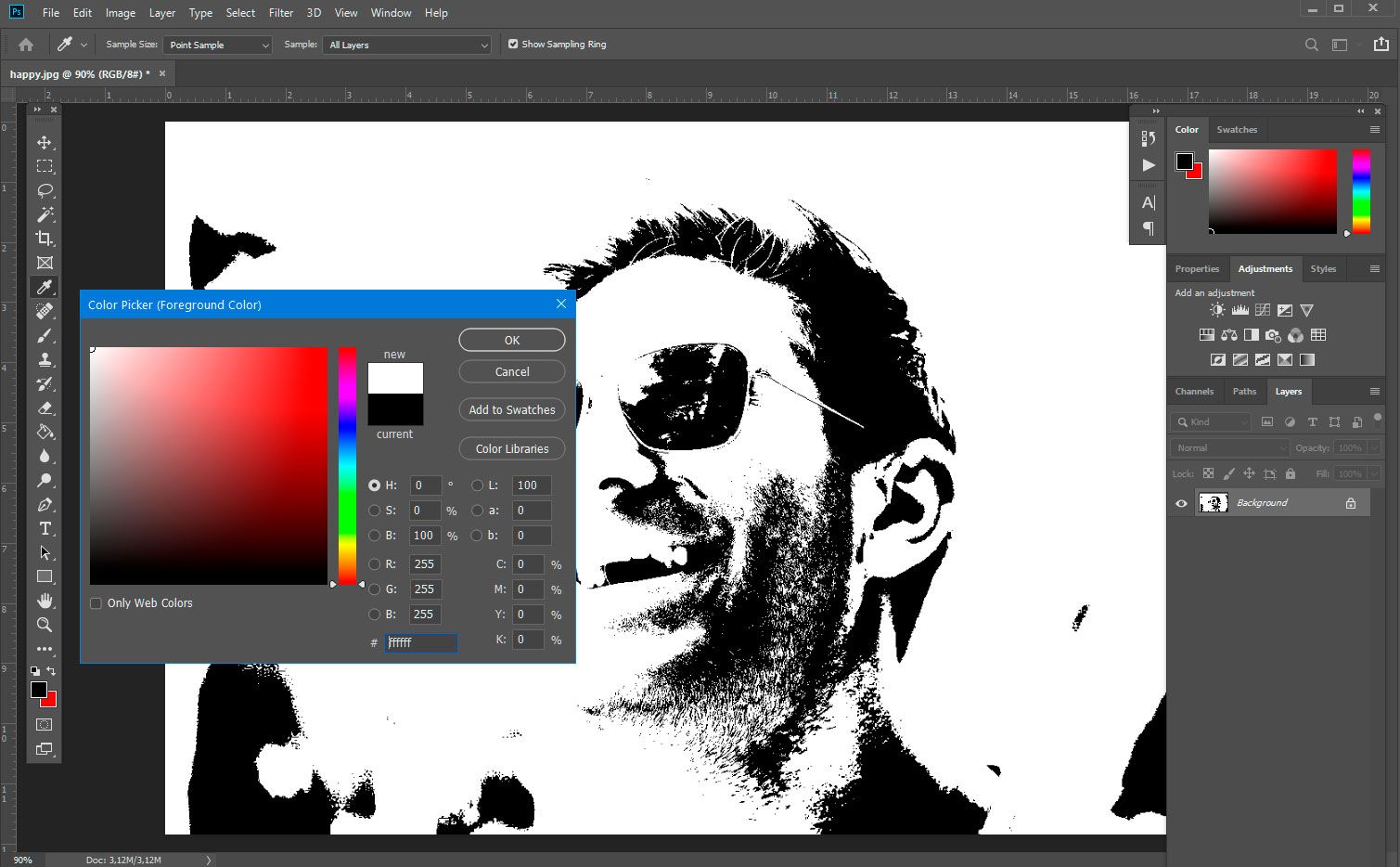 Once you have removed the details, you can connect the white spaces with the help of paint brushes so that the image can have a completed look. 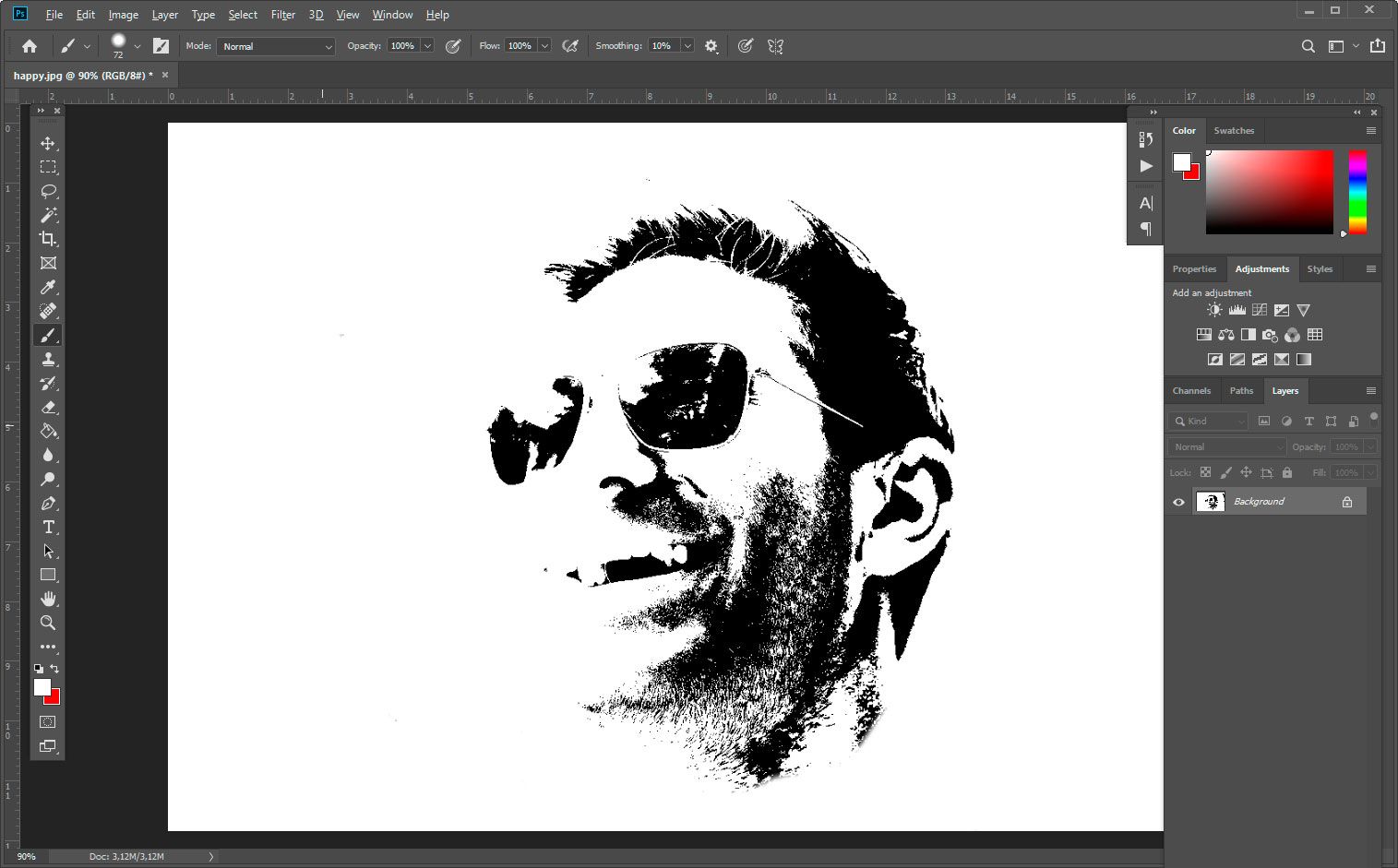 To cut out the image with more ease, from the menu bar, select the Filter option. From there, select Artistic. Use the options given to make adjustments to the details you want to show on the picture. 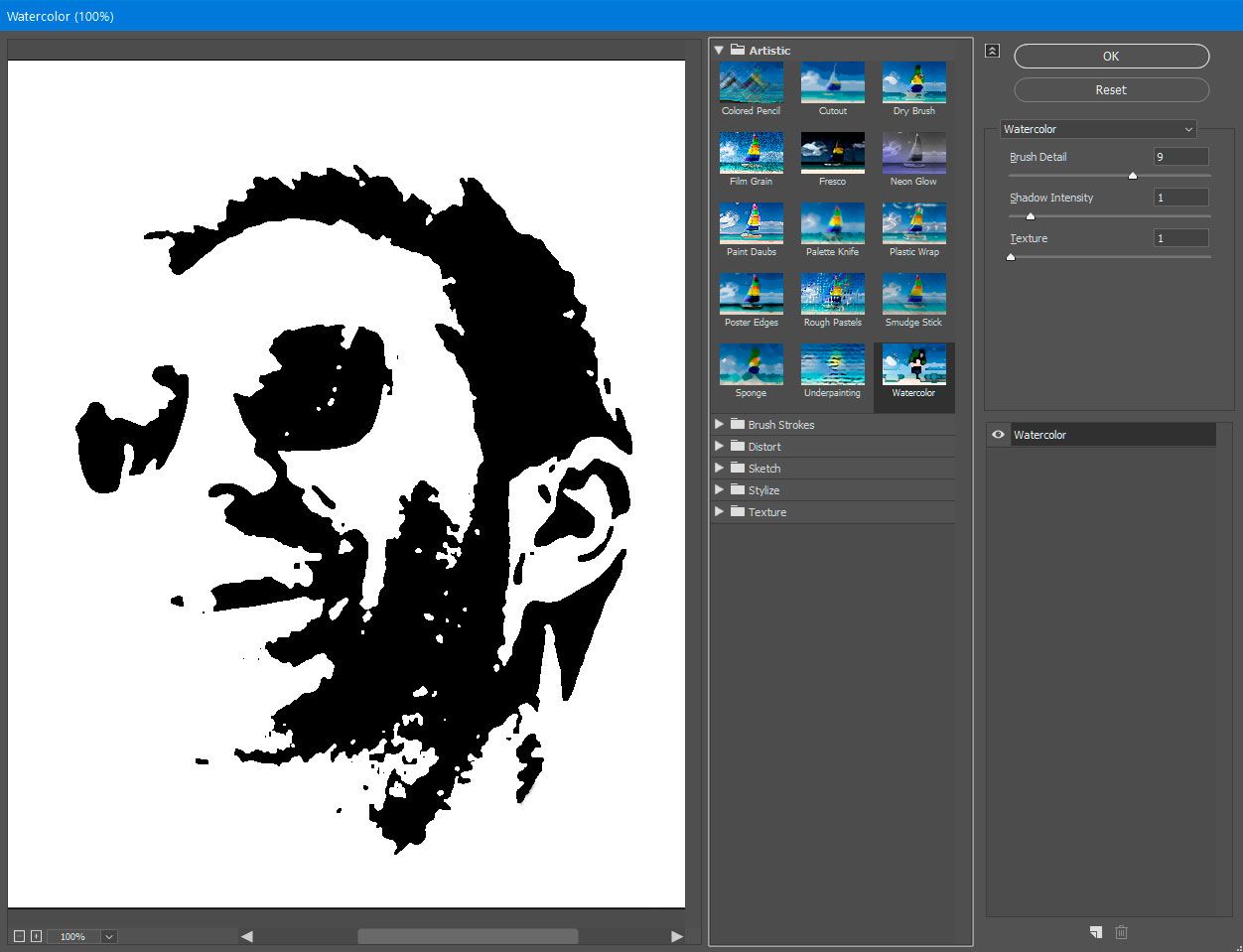 After you are satisfied with your converted image, Save the image and then print it out if you want.
Download for Free

Many people don’t have much space on their devices to download a whole stencil maker app, or they just want to edit the image once or twice. In such cases, using an online photo stencil maker programs from the picture is the best option. Some of the best stencil maker freeware are given below.

This is a very easy to use online stencil maker app:

You just have to go to the website. From there select the image you want to manipulate. 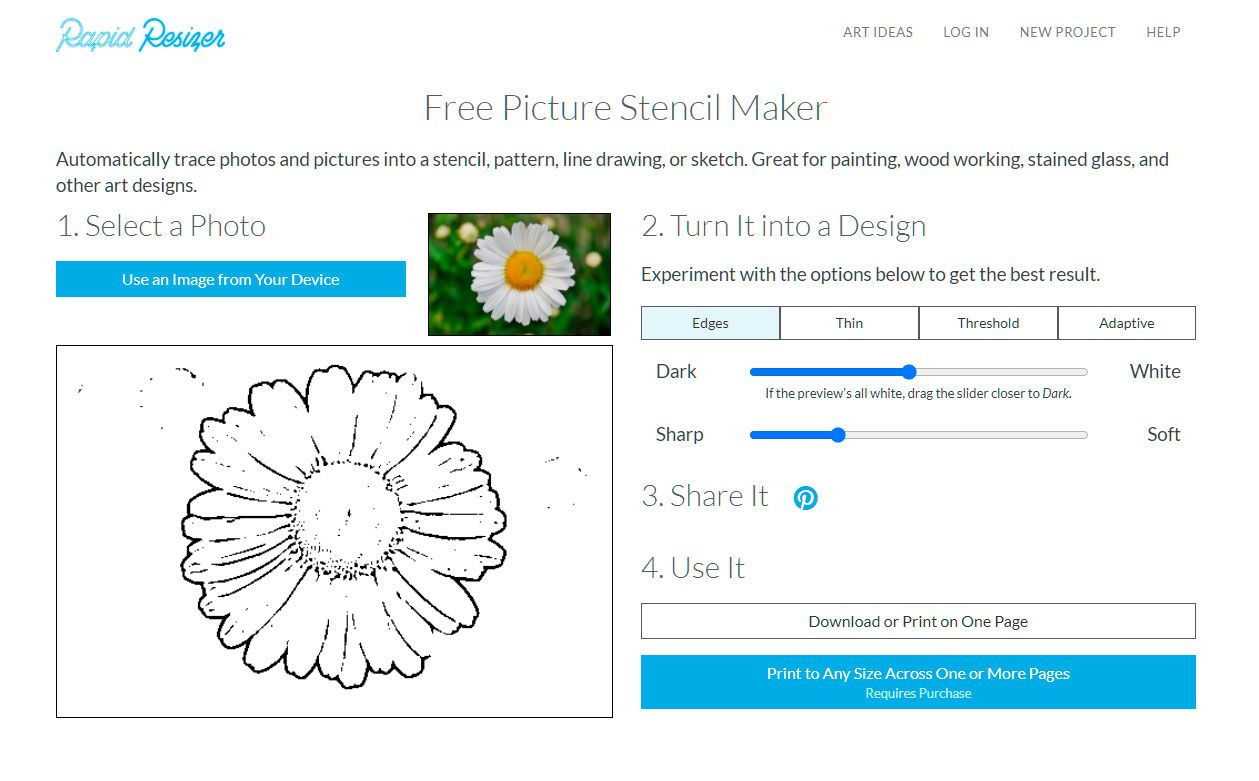 After the image is uploaded, you can see the preview of the image. You can change the settings from the given options of Edges, Thin, Threshold and Adaptive. You can make adjustments with these settings until you are satisfied. 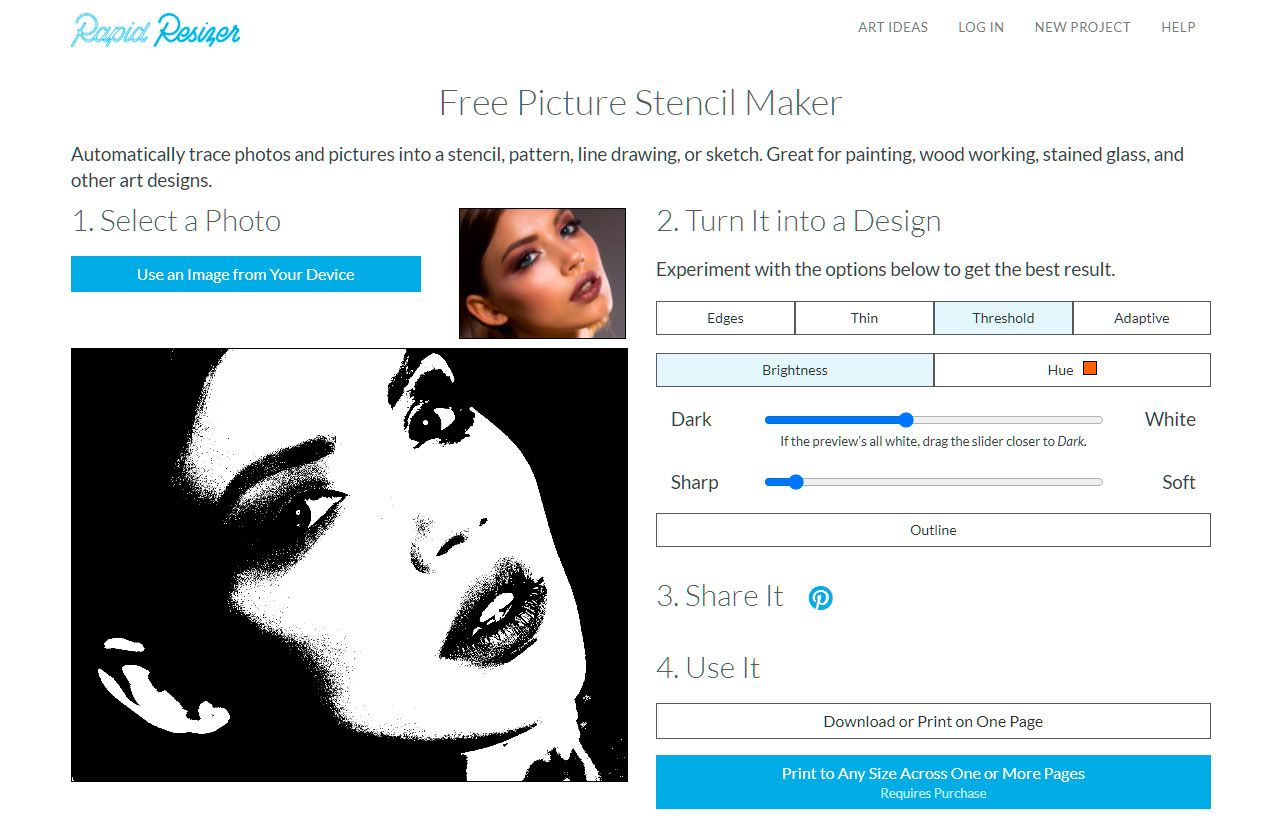 After you are done, you can directly upload the image to Pinterest or Facebook or you can just download the image to your device. The website also allows you to directly print the result, but you will have to pay for the Premium version for this option.

The best part of this website is that you don’t have to worry about your pictures leaking since everything is done by PHP and JavaScript on your browser and no image is saved to the website’s server. 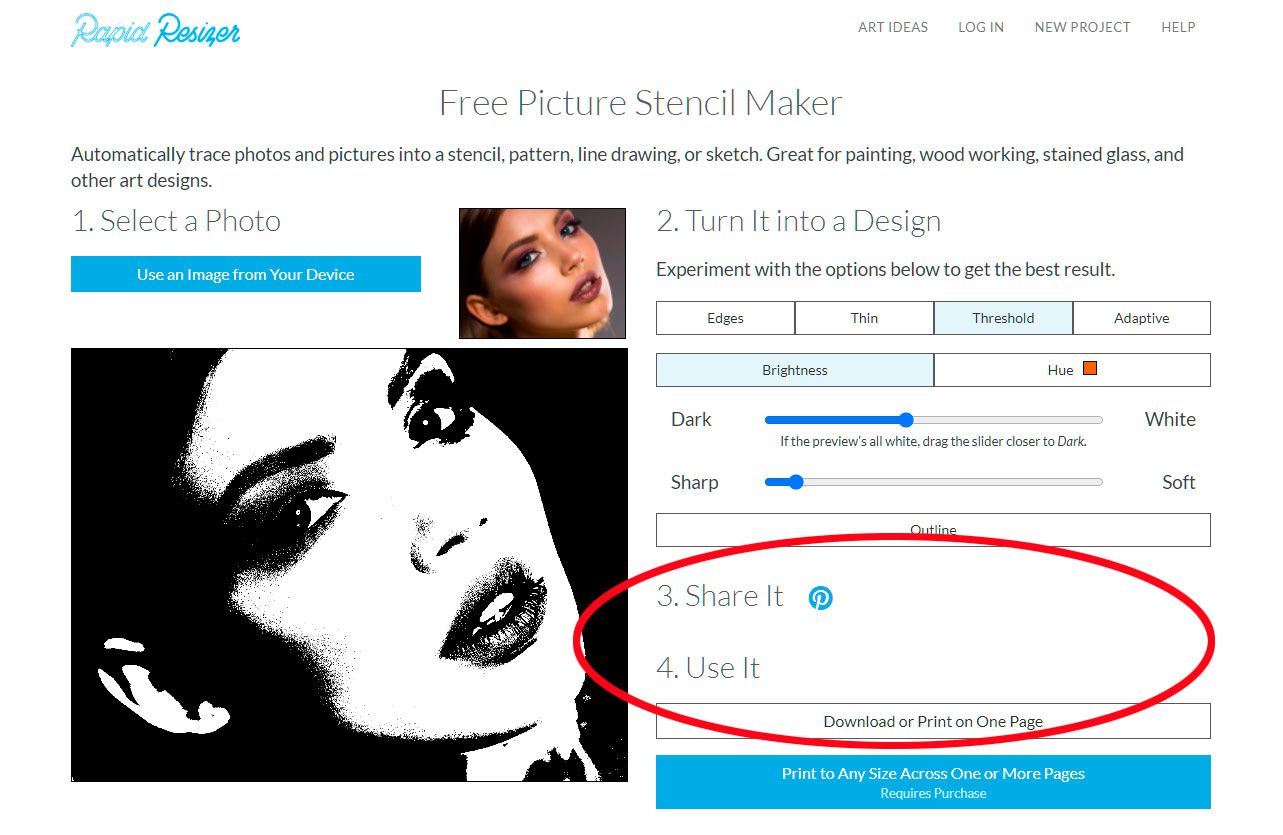 Nowadays, the mobile phone technology has advanced a lot and many of the small tasks are done on the mobile phones. People also prefer to do image manipulations on their phones rather than opening their laptops or PCs for this. That is why many stencil programs have been made for both Android and iOS operating systems. Some of the top photos to stencil apps are given below. 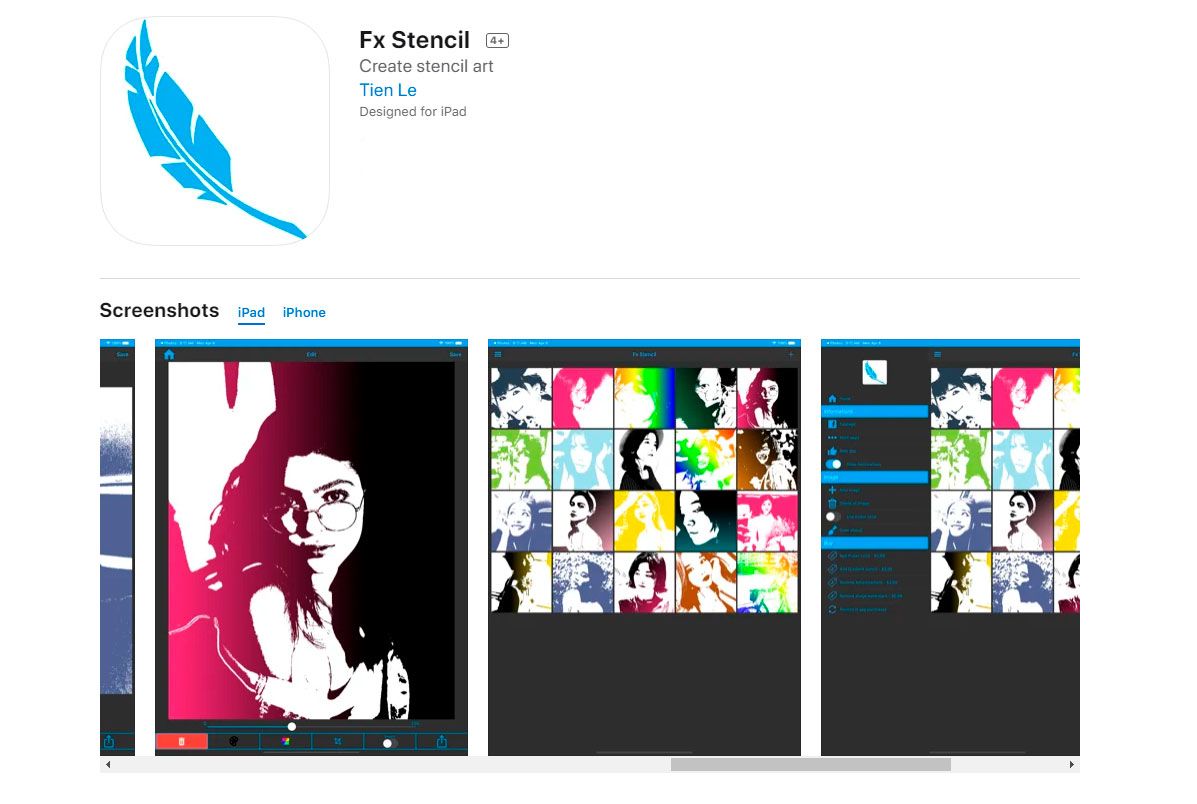 This app can be downloaded on both Apple and Android phones and provides great functionalities on both. It is very easy to use and simple to understand:

How to create a stencil from a photo using FX Stencil Maker App?

After you are done and satisfied with the image you can easily download the picture to your device. 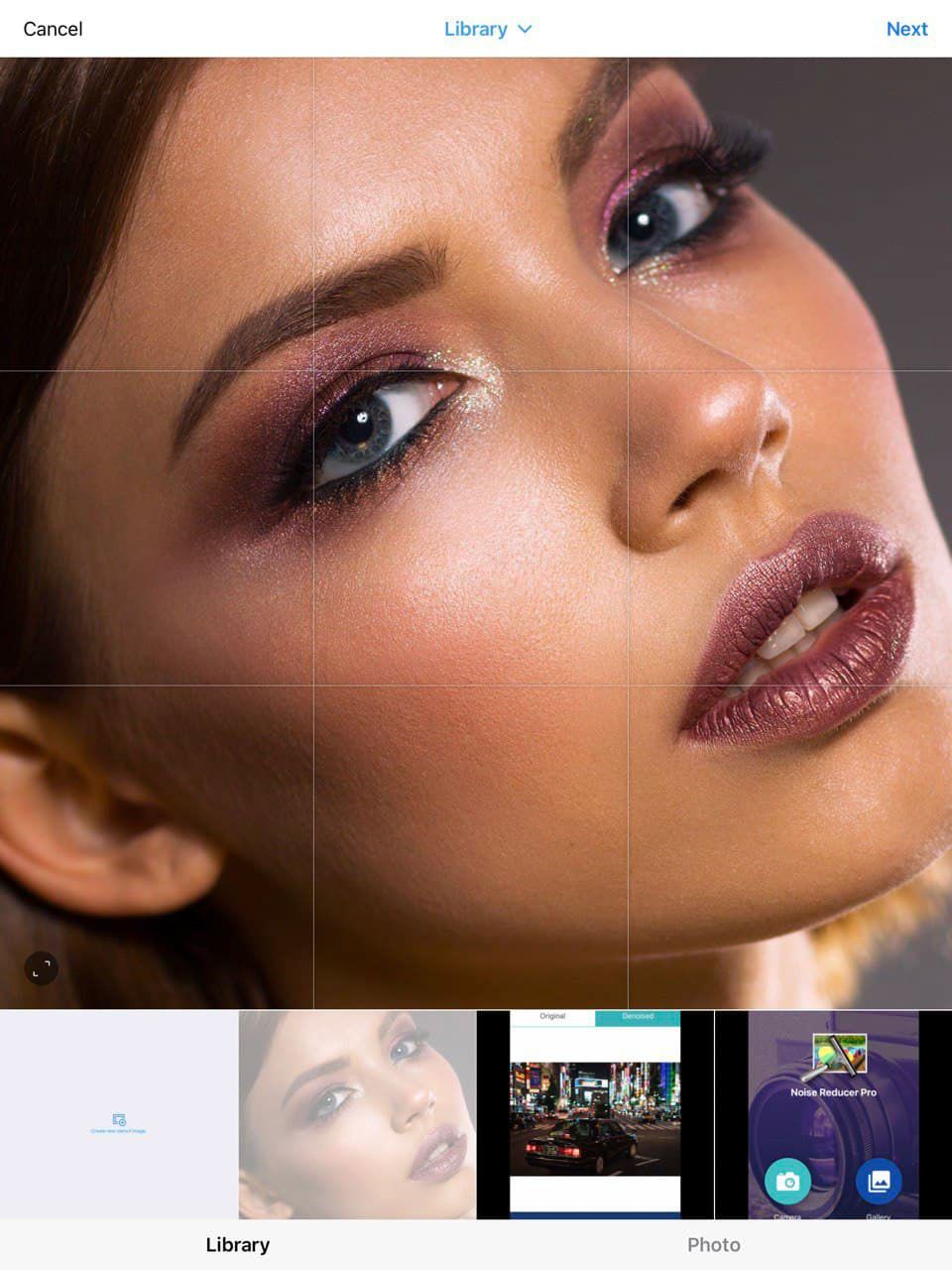 Other than mobile phones, this tool is also compatible with tablets. The newest version of FX Stencil has many great features which make it extremely desirable among users. 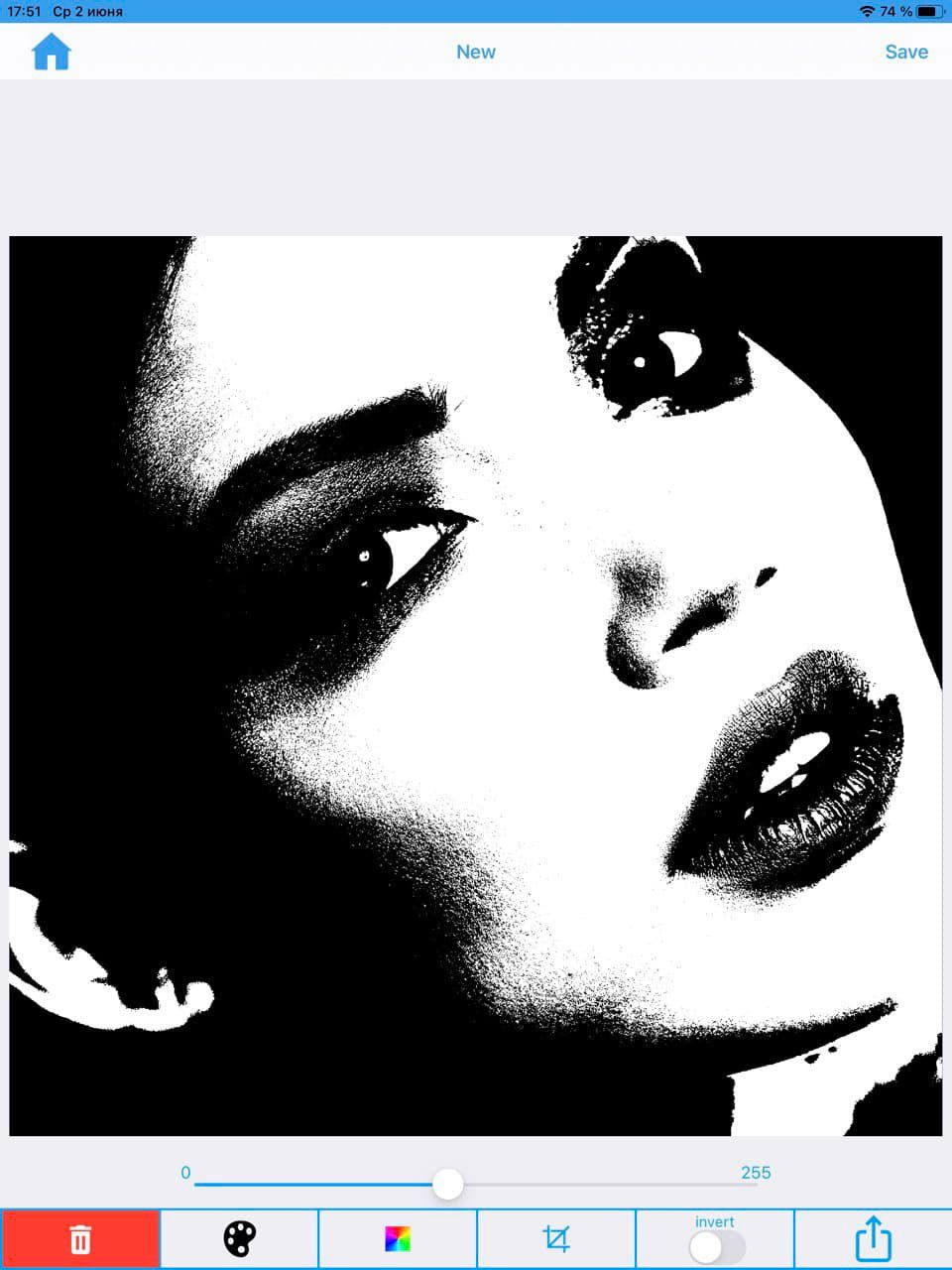 These include supporting Dark Mode, easy user interface, different color contrasts, gradient color for stencils, custom colors and so on. 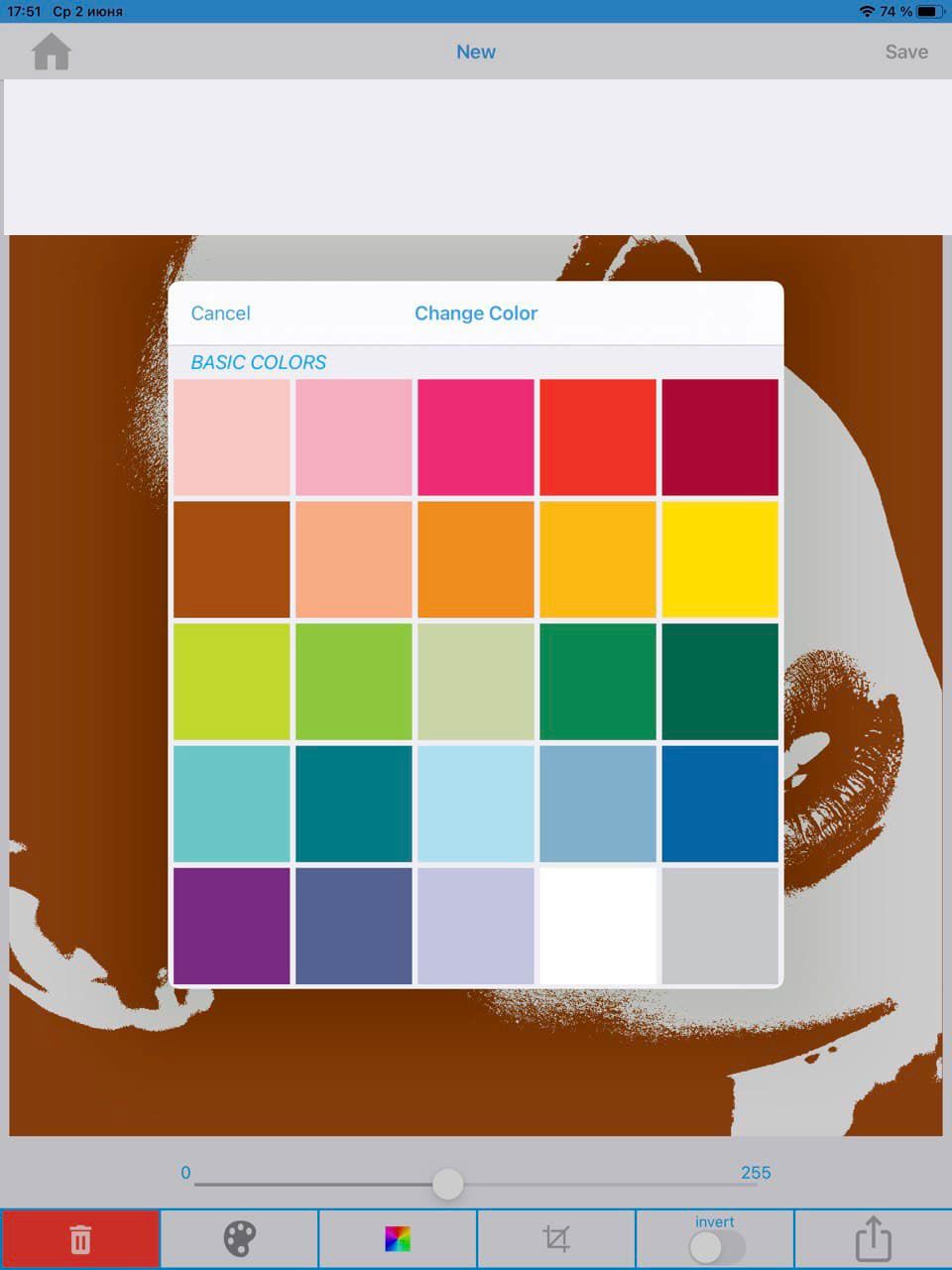 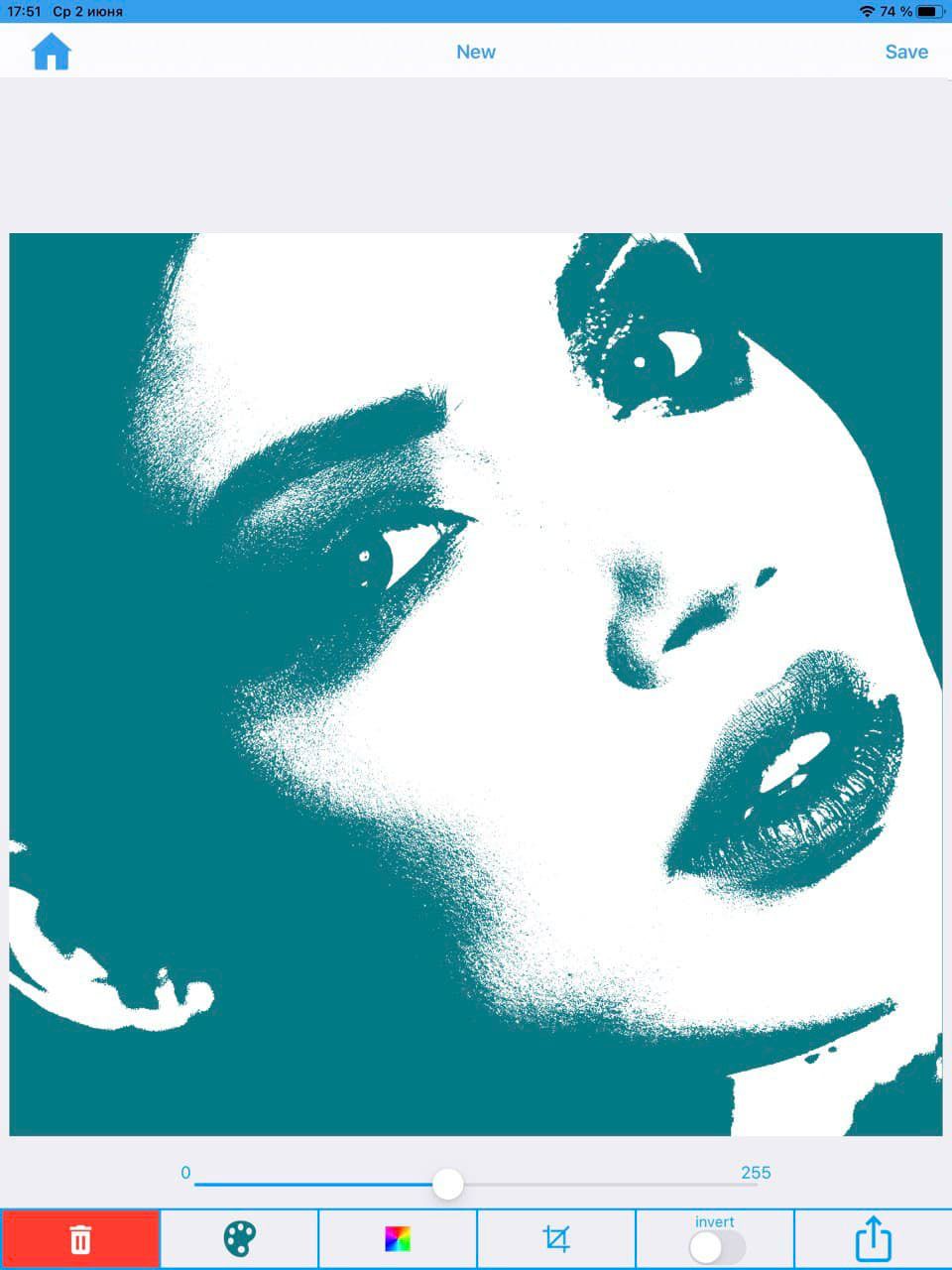 ❓ How to turn a picture into a stencil?

There are many tools that can convert your image into pretty stencils. These tools are easy to use and are intuitive. You just have to upload the image and adjust the settings until you get the result you want. One of the most popular tools include SoftOrbits Photo Stencil Maker software.

❓ How to turn a picture into a pumpkin stencil?

There are picture to pumpkin stencil tools on the market. For pumpkin carvings, it is better to choose a picture which has definite lines. Out of many tools you can choose the one that you like the most and then convert the image into stencil. After you have printed it, you can choose a soft pumpkin and then crave the picture into it using the stencil.

❓ How to make a stencil from a picture of a face?

You can choose a stencil making software or tool for this. There are many downloadable and online tools from which you can choose the one you want. After you have uploaded the picture, you can select the face and remove the unwanted background. After you are done, you can adjust the settings and get a beautiful stencil of a face.

❓ How to make stencil art?

Making stencil art is very easy if you have the right tool for it. Some people use the traditional methods to create stencil art, but with the advent of technology, there are many tools which you can use to create beautiful stencil art. Just open the image in the tool, make appropriate images and download the result.

❓ How to create a stencil from an image?

You can download the SoftOrbits Photo to Sketch Converter and upload the picture you want. It has presets that will automatically convert your image to a stencil. You can choose the black and white option and adjust it to get the stencil that you want. After you are done, you can download the image.

❓ How to turn a photo into a stencil for a t-shirt print?

You may use photo to stencil app as a T-shirt stencil maker from photo. It can generate black and white stencil that can be used for a t-shirt print.