How to Convert PSD Format to JPG without Photoshop. Download an easy to use SoftOrbits PSD to JPG Converter. 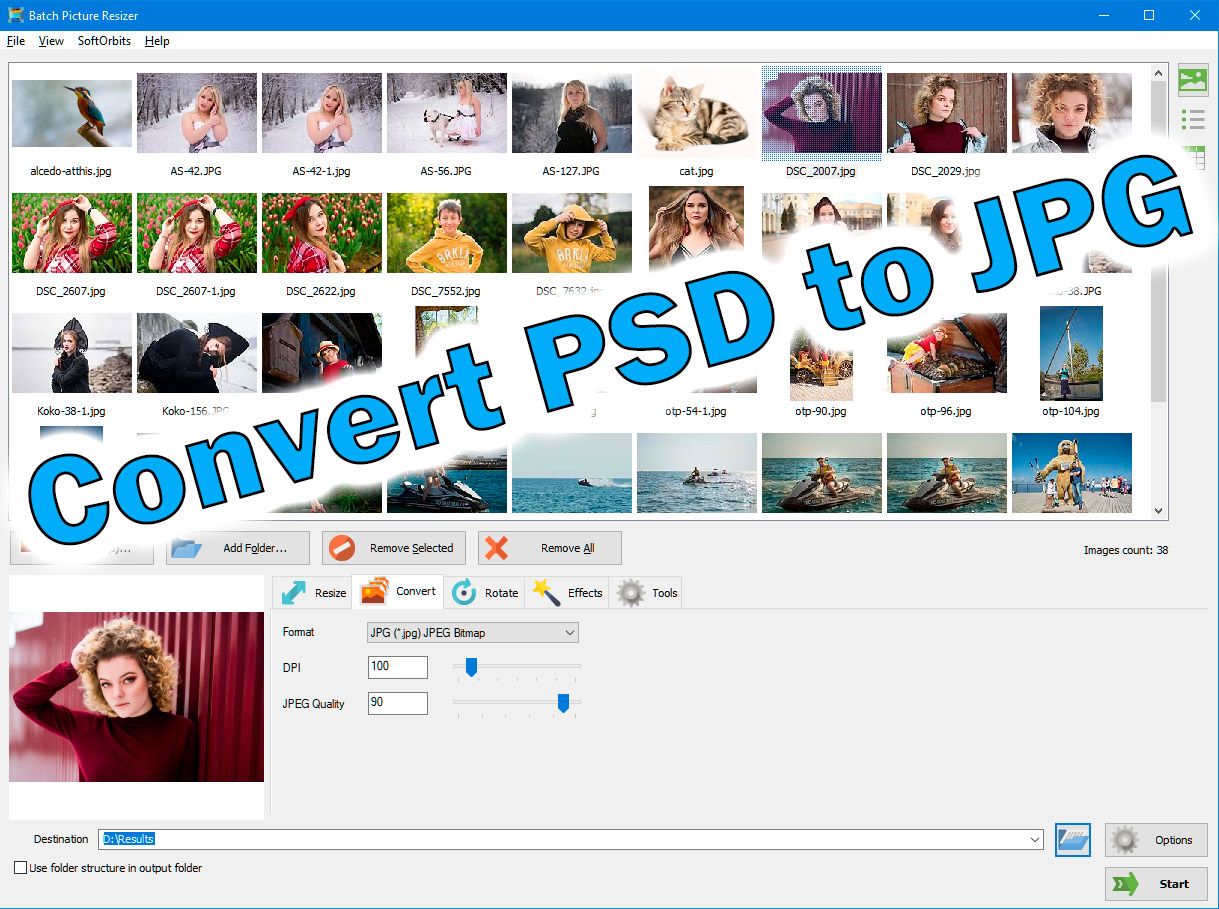 The first thing to know before chosing PSD to JPG converter is what PSD and JPG formats are. PSD is a Photoshop document created by Adobe to develop layered pictures. You can open this format in Photoshop's different versions. They can also be converted to other file formats such as JPG, JPEG, PNG, etc. This makes the pictures uploading on social media and other platforms extremely easy.
JPGs have a small file size and are used in emails, memory cards, and websites. JPG files are very easy to compress to almost 1/10th their size. This saves bandwidth capacity. The only downside is that compression of JPG formatted images slightly loses their quality, so they are generally called 'lossy.'

One of the best downloadable psd to jpg converter software in the market is the Batch Picture Resizer. Just as the name states, it is not only great for changing the size of the images but also does a lot of other useful functions as well, such as cropping images, reducing MBs of an image, changing photo resolution, resizing GIF images, rotating pictures, fixing picture contrast, adding watermarks, resizing images in batch and so on. However, one of the most important features is being a format convertor such as a PSD file convertor or a Photoshop file convertor.

How to Convert PSD to JPG

Many graphic designers and developers use Adobe Photoshop to alter their images and change them to something fascinating. These images are changed layer by layer and are saved in the PSD format. However, this format is extremely heavy and cannot be easily uploaded anywhere. For this, the best solution is to convert the PSD format images to JPG, which is lightweight compared to the latter.
There are many methods with which we can do it. Three of the main methods that can be adopted include:


These three methods are extremely effective and easy to use. Many offline and online software is easily available on the internet, which you can use to convert PSD files to JPG at your convenience.

The SoftOrbits PSD to JPG Converter is one of the best software in the market and is extremely desirable because of the number of formats it can support. It can support image formats such as PSD, JPG, JPEG, PNG, BMP, TIFF, PCX, GIF, TGA, and JPEG 2000.
Other than this, the Batch Picture Resizer can also support almost 30 formats of RAW files, including Nikon (NEF NRW), Canon (CRW CR2 CR3), EPSON (ERF), Panasonic (RW2), Mamiya (MEF), and so on. These formats are commonly based on the TIFF format and produce an image from the camera sensor data with which you have taken the picture.
With the help of this, you can easily use this software as the PSD to jpeg convertor because of the ease with which it does the job.

How to Convert PSD to JPG without Photoshop

There are many online and offline software that can convert PSD to JPG without using Photoshop software. Even though Photoshop can change formats, it is a heavy software that can't be downloaded everywhere.
Because of this, if you want to upload your images on websites such as e-bay, or email those, then using a convertor is a wise choice. Many great converters are available free of cost. One of such converters is the Batch Picture Resizer. Converting images to different formats is very easy, and just one click does the job.

How to use SoftOribts PSD to JPG Converter 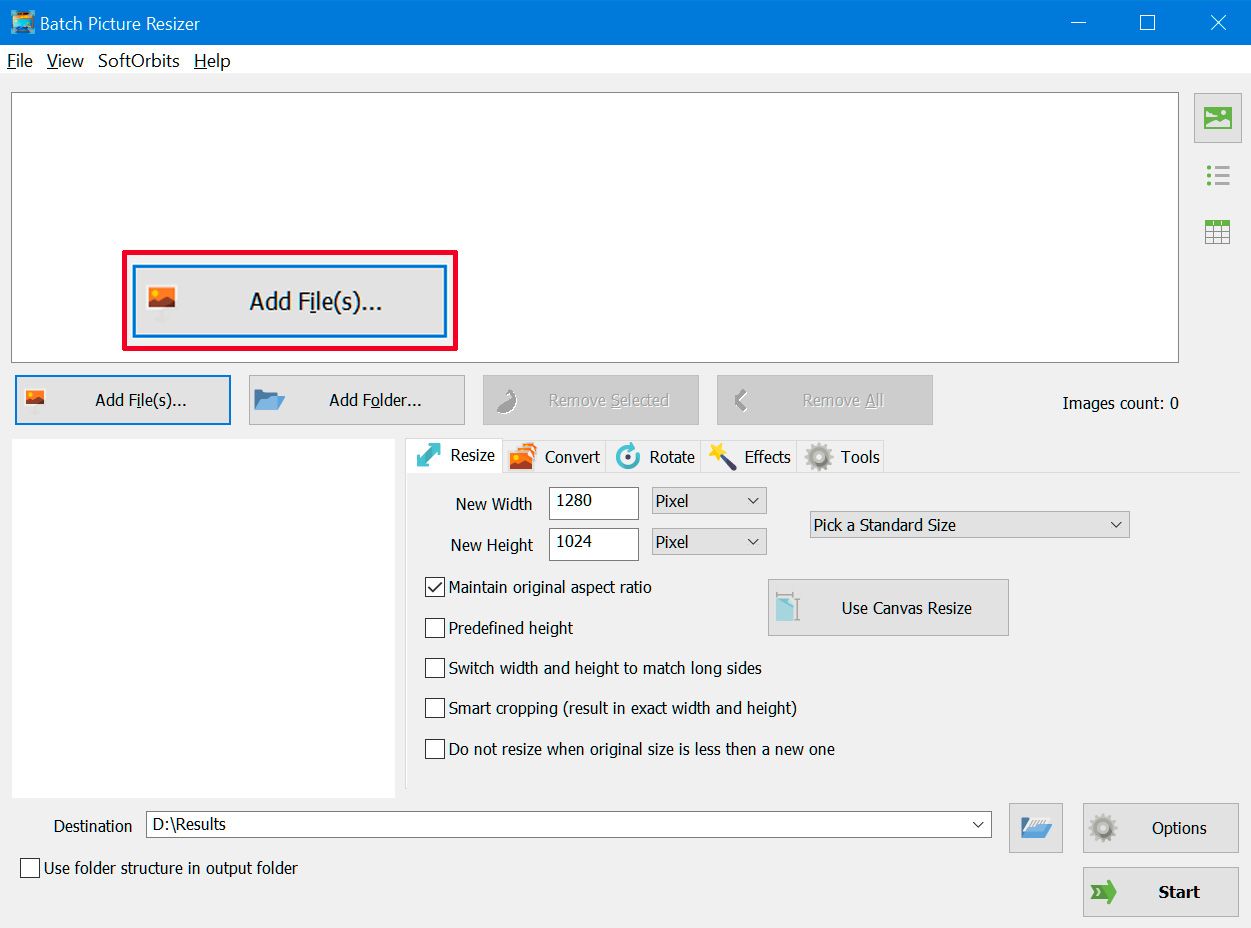 Upload any image of your choice with the PSD format. 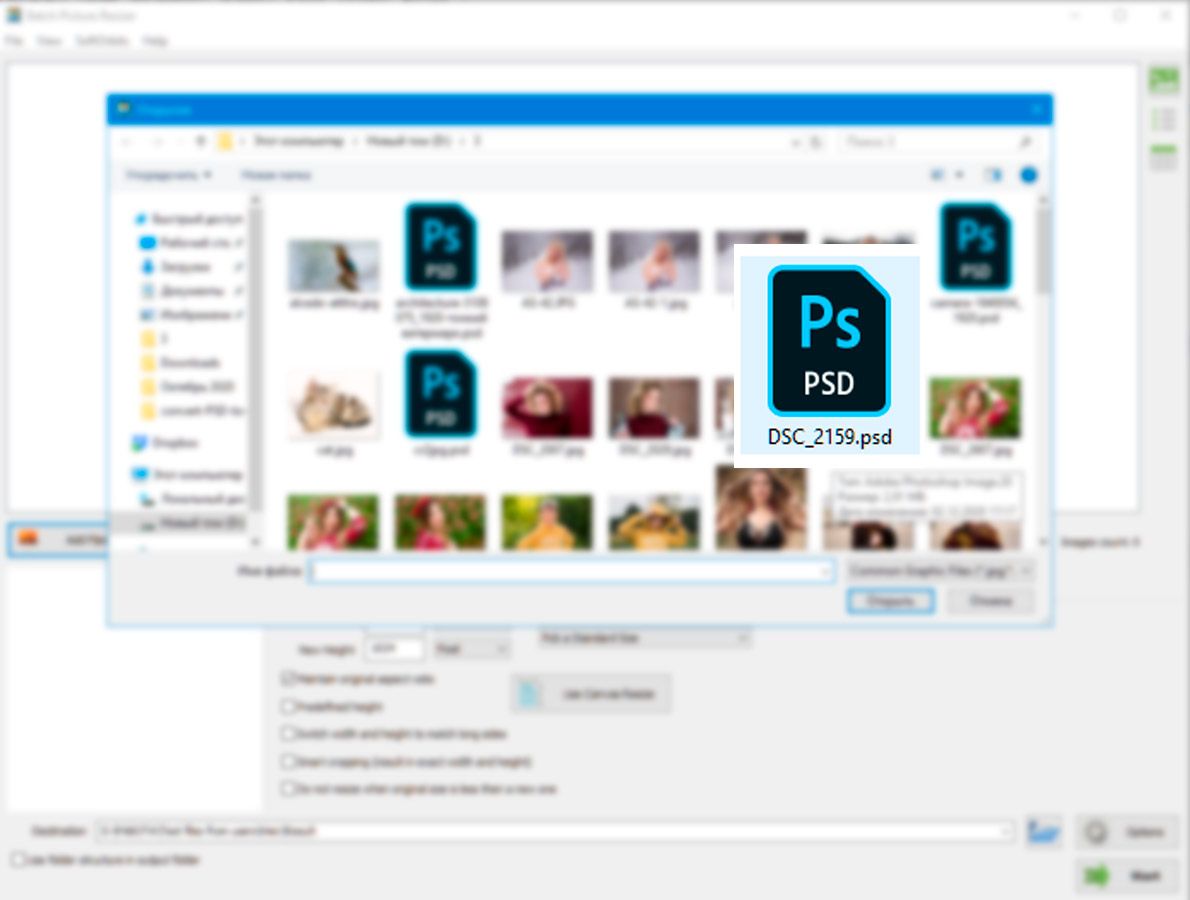 Clickon the option of Convert and Selectthe JPG format. 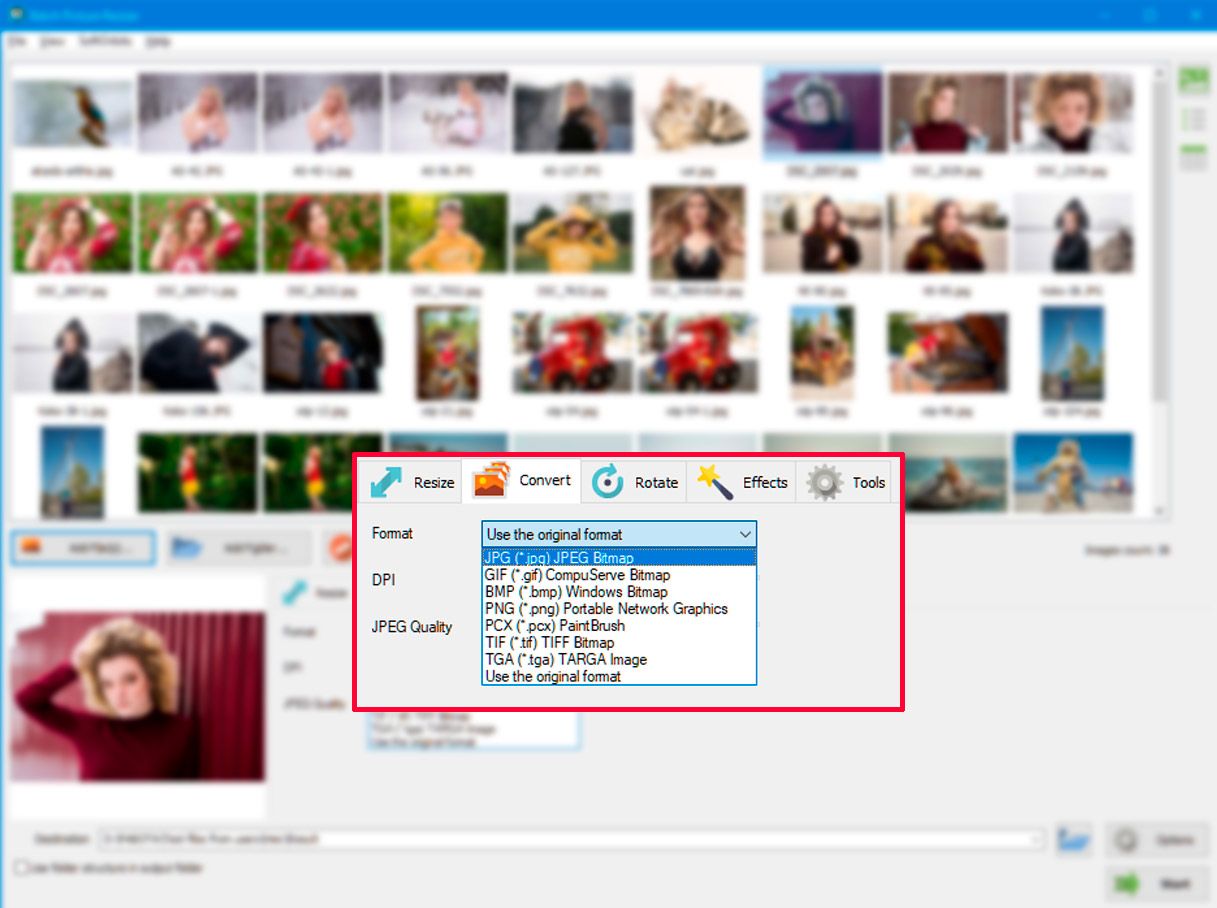 You can save the image on any folder you want. It will be in the JPG format. 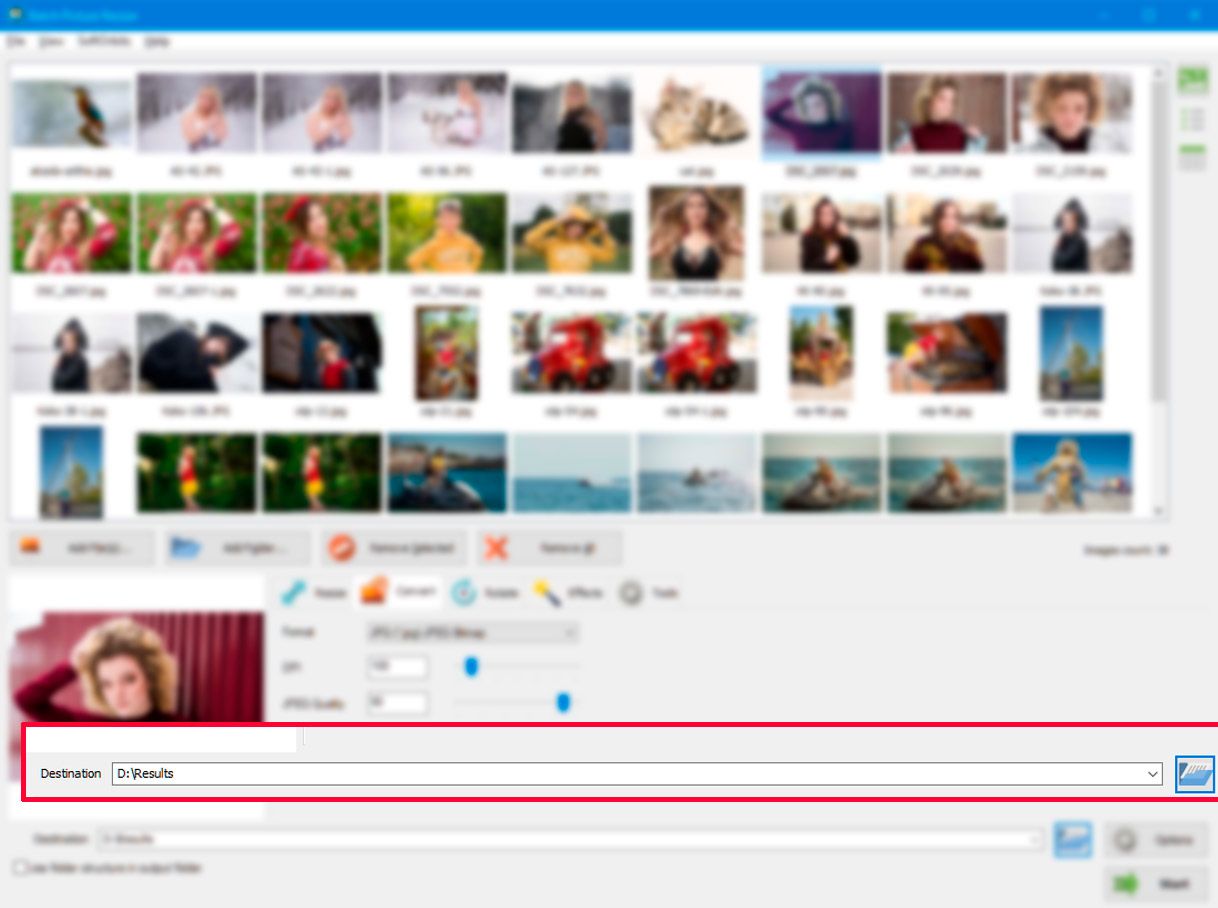 Then click on the Start button. The conversion will start.

How to Export Photoshop to JPG

Adobe is a great software company that has developed much high-level software for photo editing, creating, etc. One of the best software that everyone, from students to professionals, can use is Adobe Photoshop.

This software has many useful features that make it an all-rounder option for image editing. One of the prominent features is the format conversion of software. It is a relatively simple method that does not have a lot of complexity. You can save PSD as JPG with the help of the following steps.

Edit the image in any way you want. While working, when you save it, it will be in the PSD format. 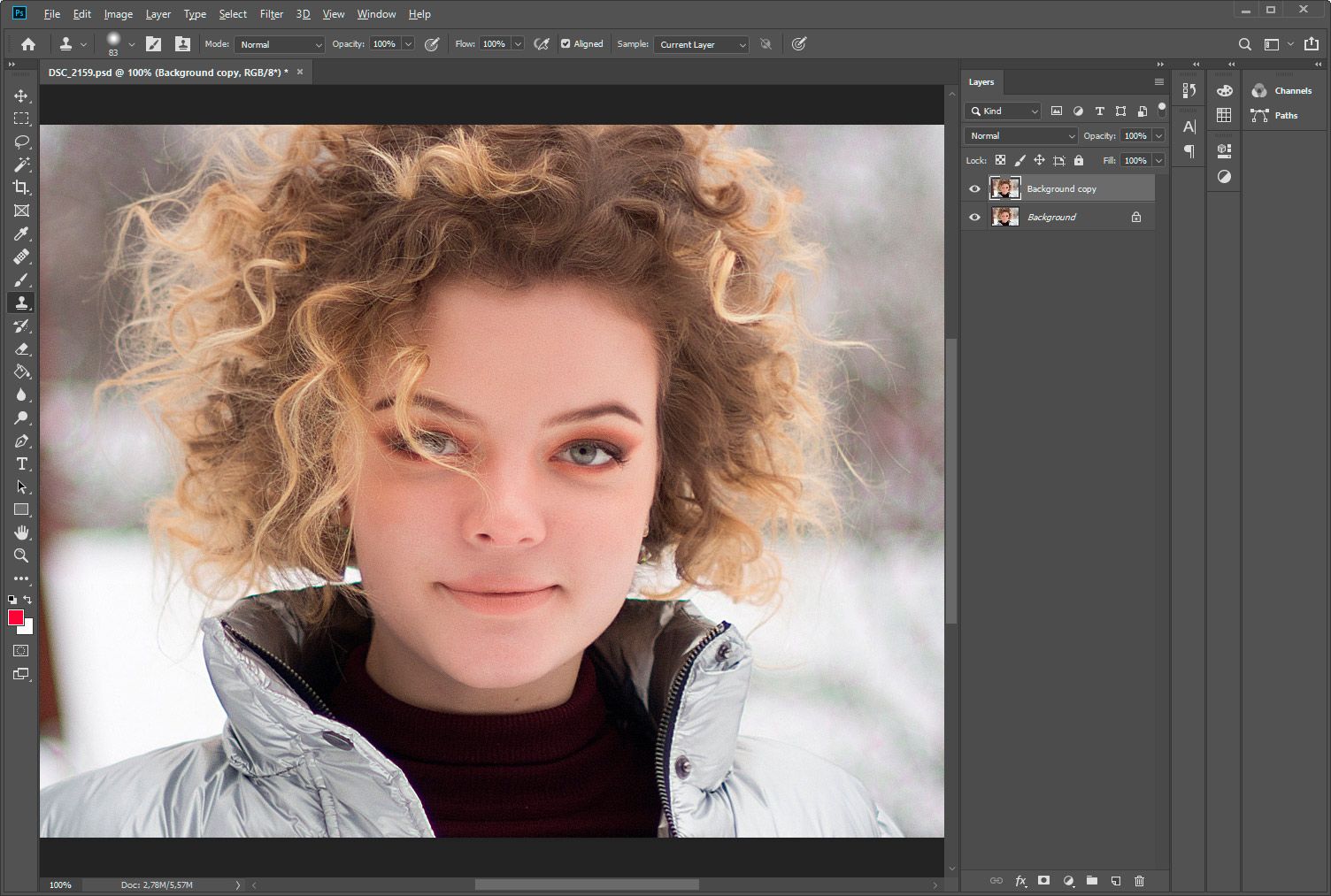 Click on the File option in the menu bar, select the Save as option. 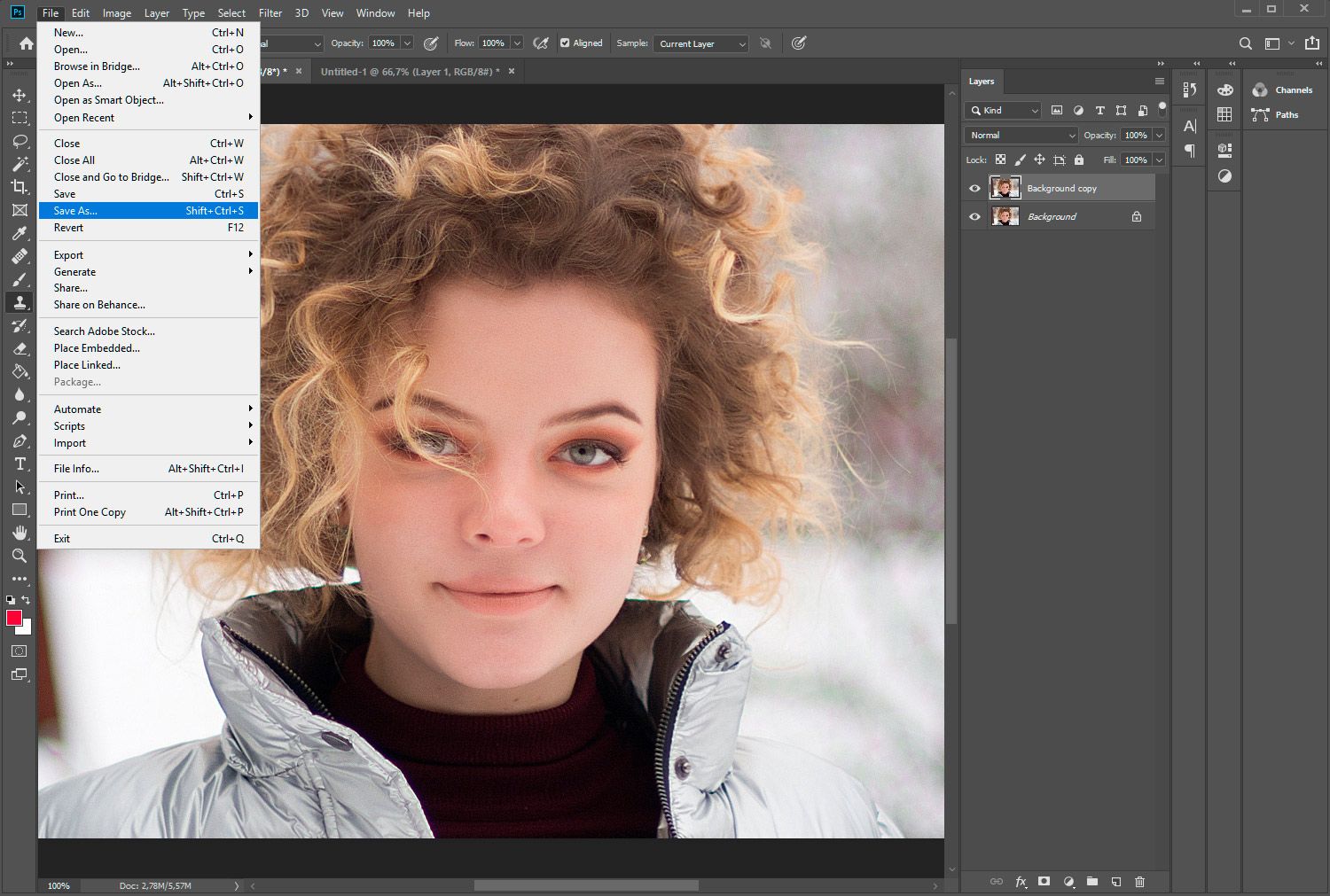 Choose the format of your choice, in this case, the JPG option. 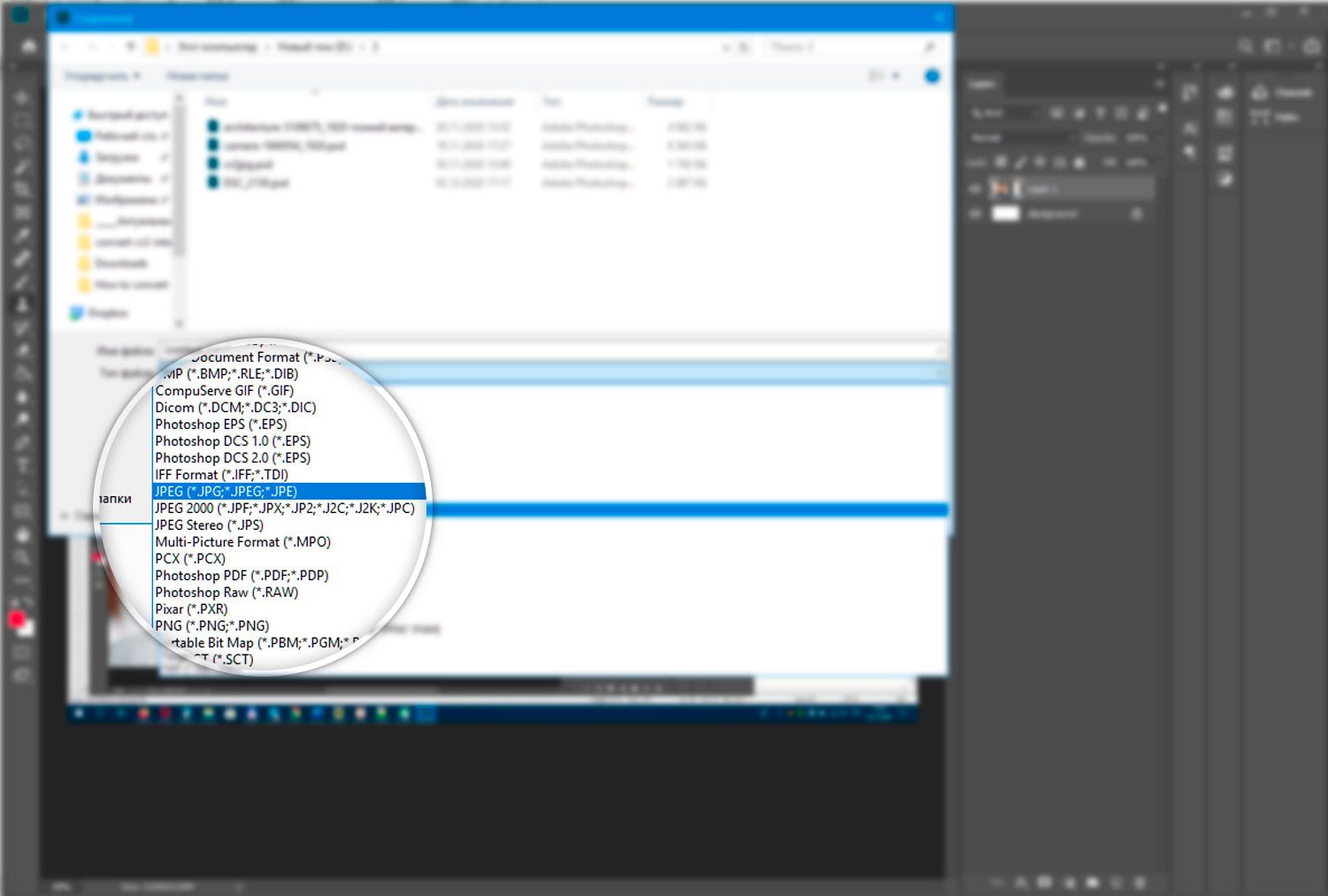 How to convert PSD to JPEG in Photoshop

Another method that you can use is slightly different but will convert the format easily.

Click on the File option of the image.
Select the Export option. 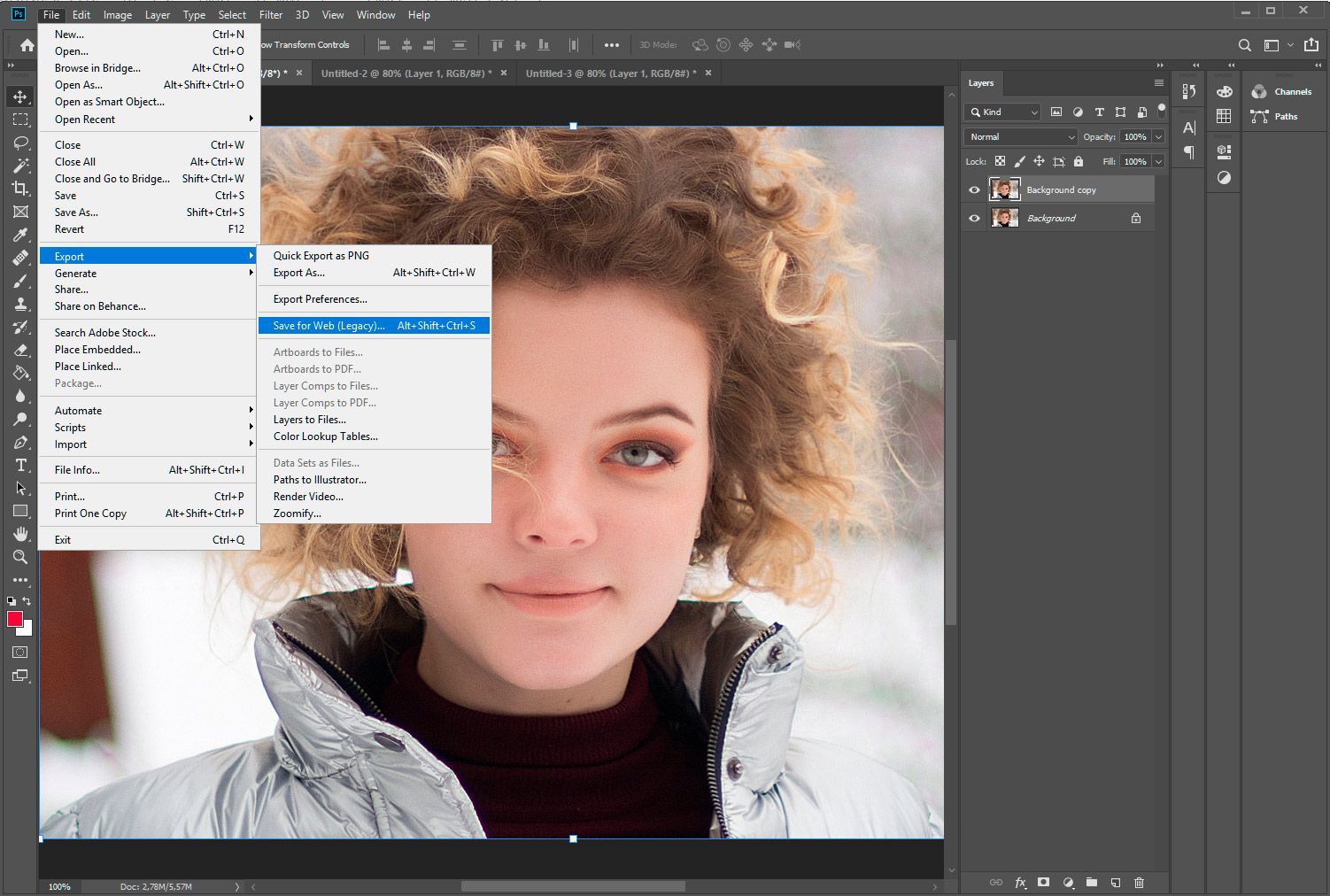 A dialogue box will open. 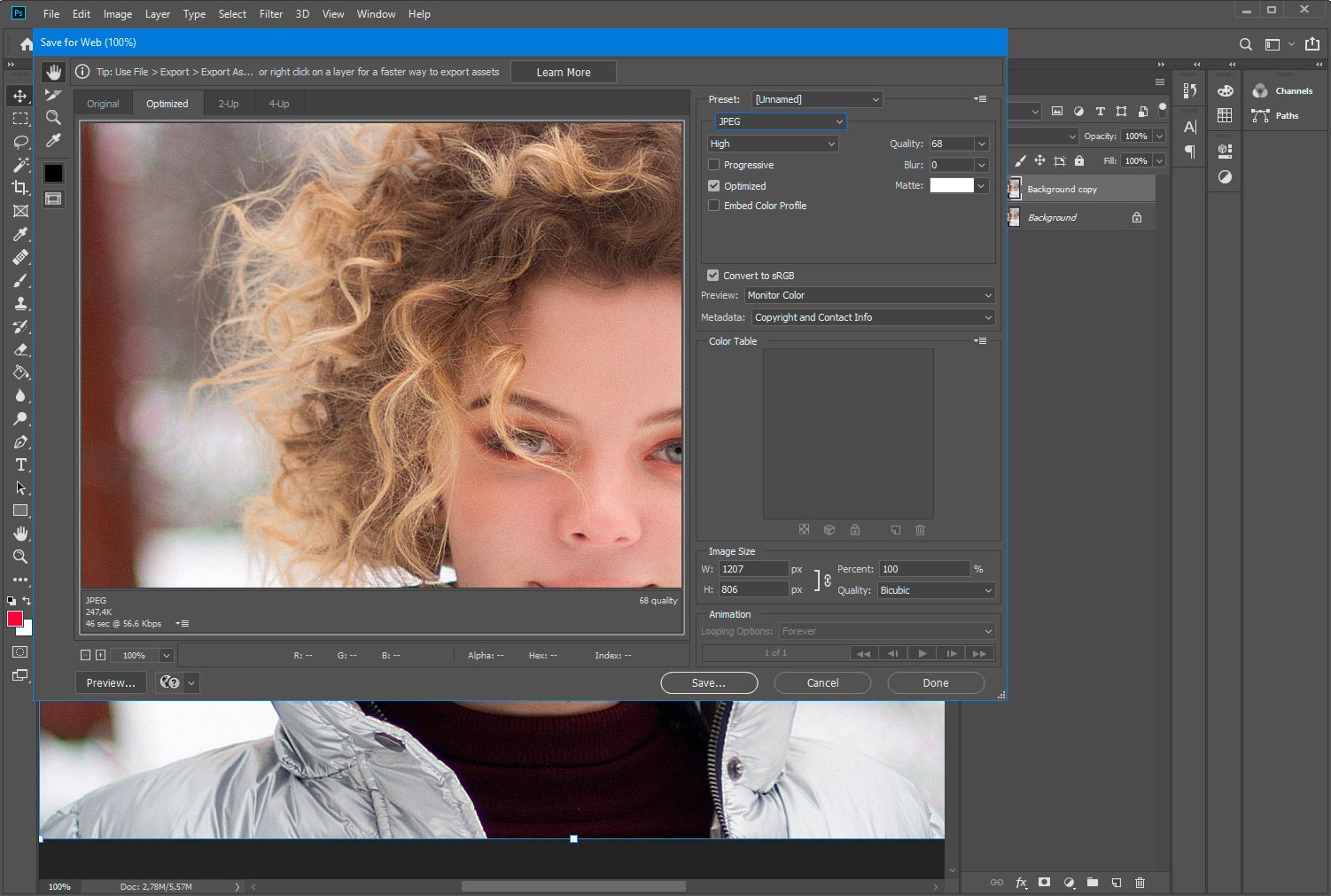 From there, select the save for Web option, and the image will be converted to JPG format. 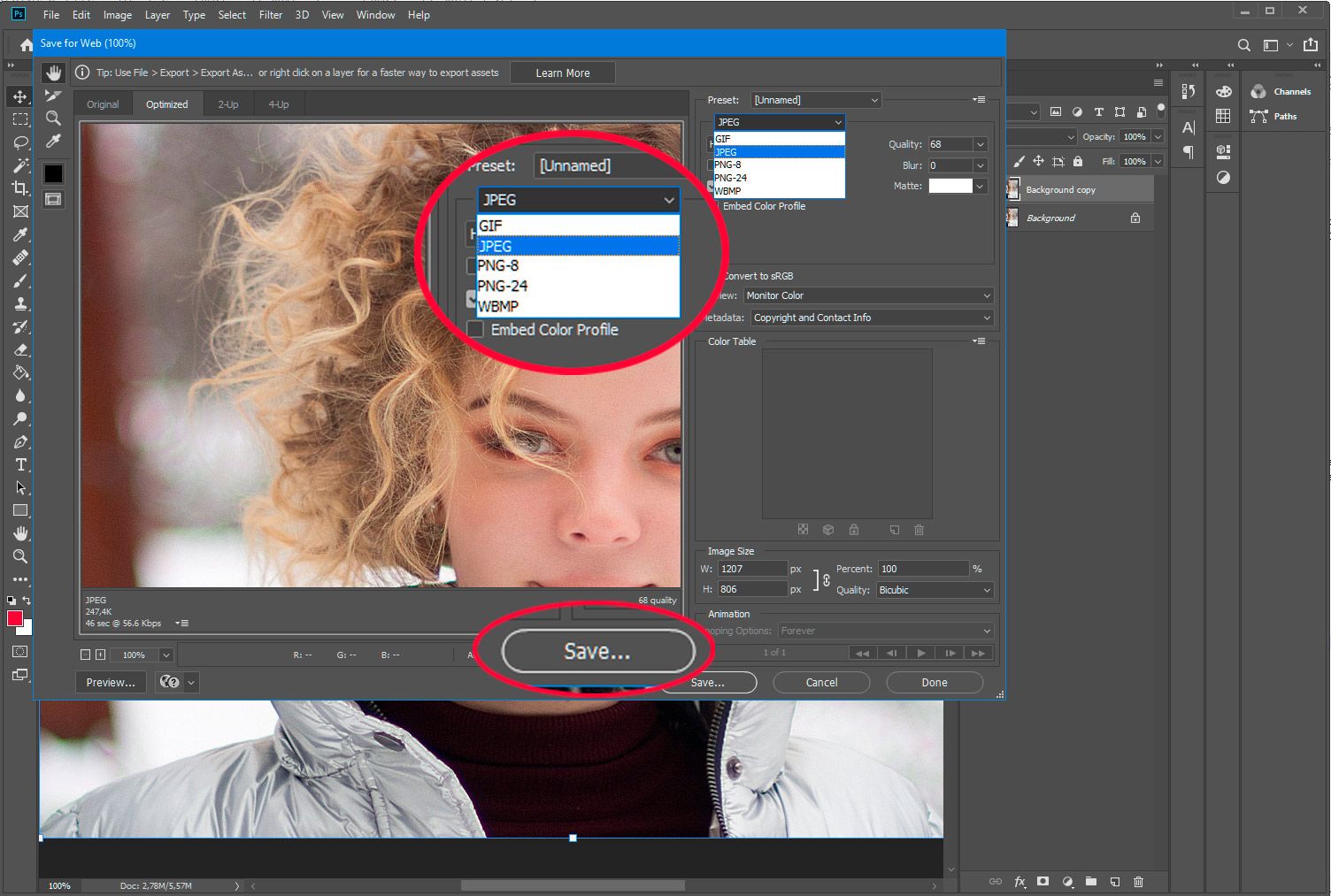 Many online PSD to JPG converter format converters are available on the internet that saves downloading time and space for saving software. Three of the top online convertors are explained below.

This is one of the top file converters that can convert different text, image, audio, video formats to another. One of the most commonly used options is the free PSD to JPG converter.
You can convert the image format with the help of the following steps. 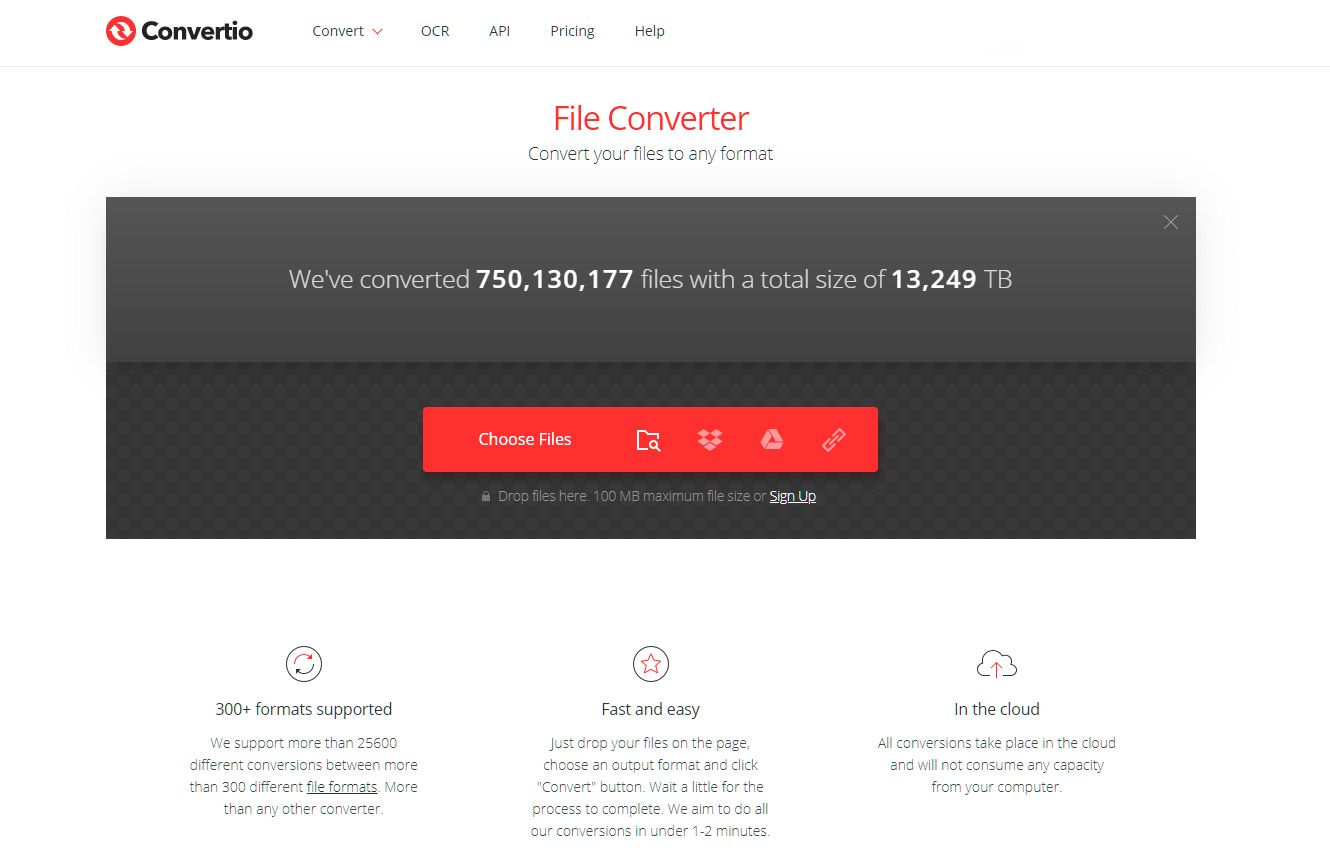 This online PSD to JPG convertor is the second on the list. The feature that makes it the most desirable is that it can convert multiple images to a single format at a time. 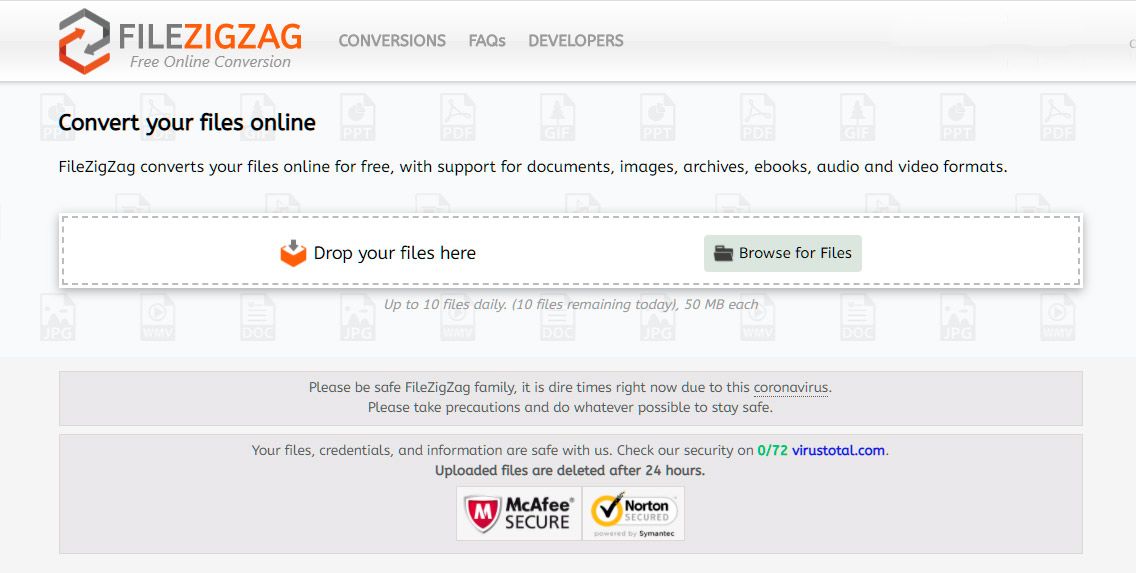 This free PSD to JPG convertor is third in the list and for a good reason. It also gives many file options to choose from, such as text, image, and video. The other thing that you have to give is an email address. With the help of this, the converted image will be sent to your email, from where you can download it easily anywhere you want.

❓ How to convert Photoshop to JPG?

You can convert an image of PSD to JPG with Adobe Photoshop options, using a downloaded PSD to JPG Converter software such as Batch Picture Resizer, or using an online convertor from the internet.