How to remove Snapchat Caption from Picture

The SoftOrbits Snapchat Caption Remover removes all kinds of watermarks and logos from images easily without affecting the original image at all. 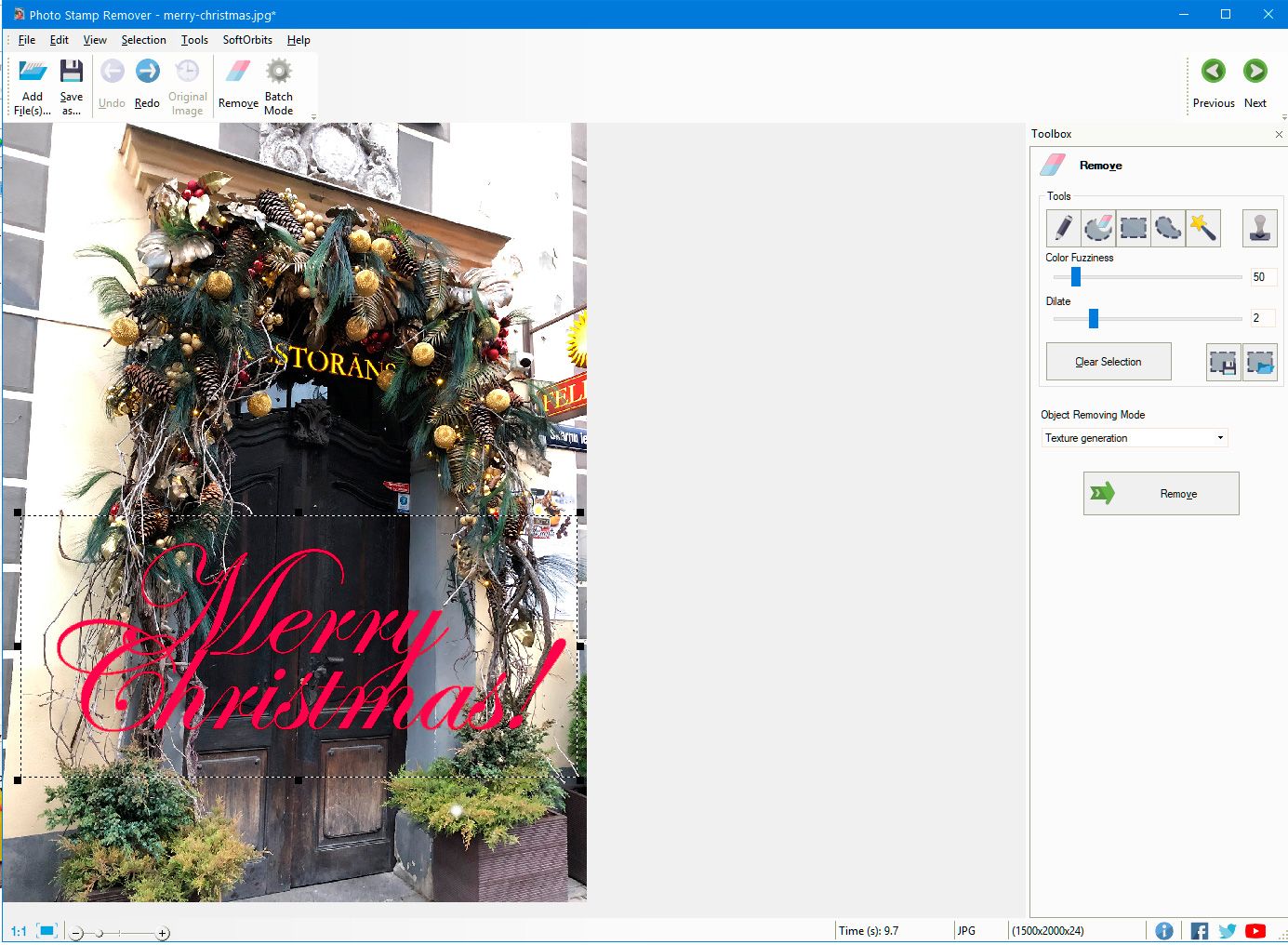 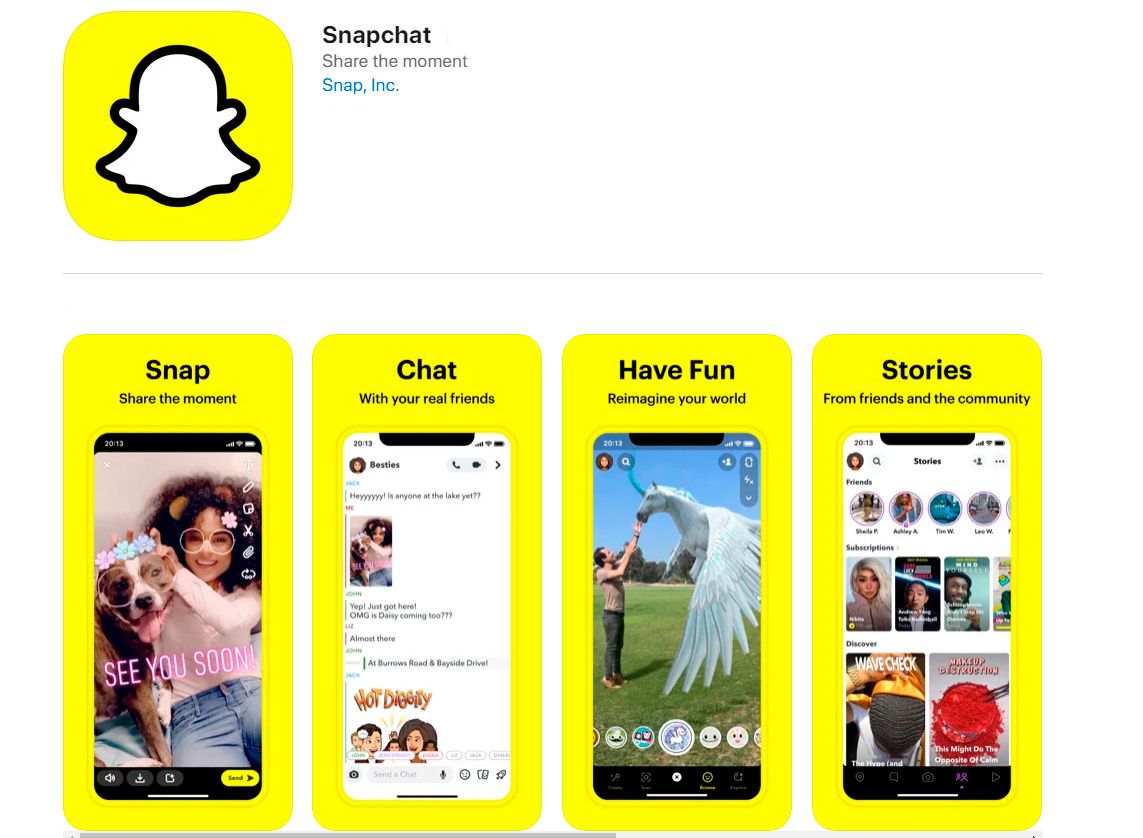 There are many times when we take a very nice picture but there is some extra object or person that ruins the precious moment. There are also other times when we want to use a picture from the internet but cannot do so since there is a watermark, text or logo on the picture. There are also some pictures that have date or time stamps on them, however, we don’t need them since we want to upload them on a social media site. Such cases may also arise when we take a picture from Snapchat and add text on it, but later want to remove snapchat caption.

In such cases, mostly editors and graphic designers use high quality graphic software. Learning how to use them takes time and energy and might be difficult for some people. If you are a user who just wants to upload your favorite picture with your best friend without the text that added before, you might be in need of a Snapchat text remover. For this purpose, many developers have developed amazing Snapchat Caption Remover that can erase captions from Snapchat in minutes.
Some of these software can be downloaded on the computer while others are online tools. You can choose the one that is the most suitable for you after determining their advantages and disadvantages.

One of the best Snapchat Caption Remover that are available that can easily remove text from Snapchat photos is the SoftOrbits Watermark Remover. It has the ability of removing any extra objects, people or even buildings from your image. From this, you can guess that removing text is just a cinch for it.
This software provides many amazing features that can remove all kinds of texts easily. If your text has a transparent background, then you can use the marker tool which highlights the text and then removes it easily. 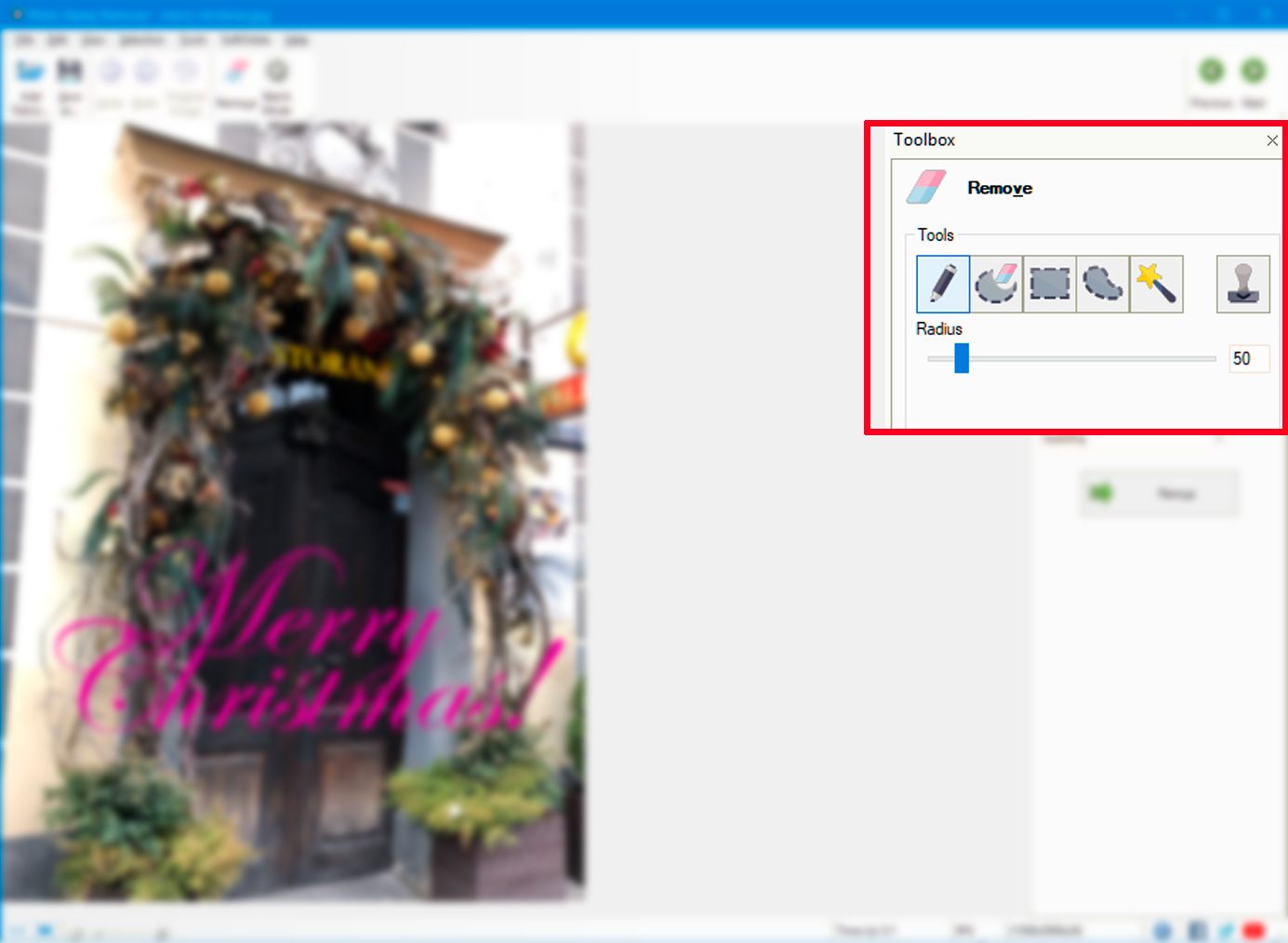 This smart snapchat caption remover software makes use of at least four algorithms that make sure that the software is doing all the hard messy work while you just have to click a few buttons. The algorithms for removing objects include quick remove, hole filling, texture generation and inpainting. They remove all the extra object effortlessly.
If you are not satisfied with the automatic removal of the software, then this software provides you with the option to remove snapchat caption manually. For this it provides a bunch of tools which include Smudge Brush, Concealer tool and Clone Stamp tool to remove the object manually. This option is for more advanced graphic designers who want to clear even the tiniest of details from the captions of Snapchat. However, for normal users, the automatic removal option does majority of the work.
Using the software is the easiest thing you have ever done.

How to Use Snapchat Caption Remover

You just have to follow the few steps that are given below and you will be able to remove text from snapchat or other objects easily.

Download and install the SoftOrbits Snapchat Caption Remover.
Download for Free
Click on the Add Files option and from the browser, select the image from which you want to remove the text. 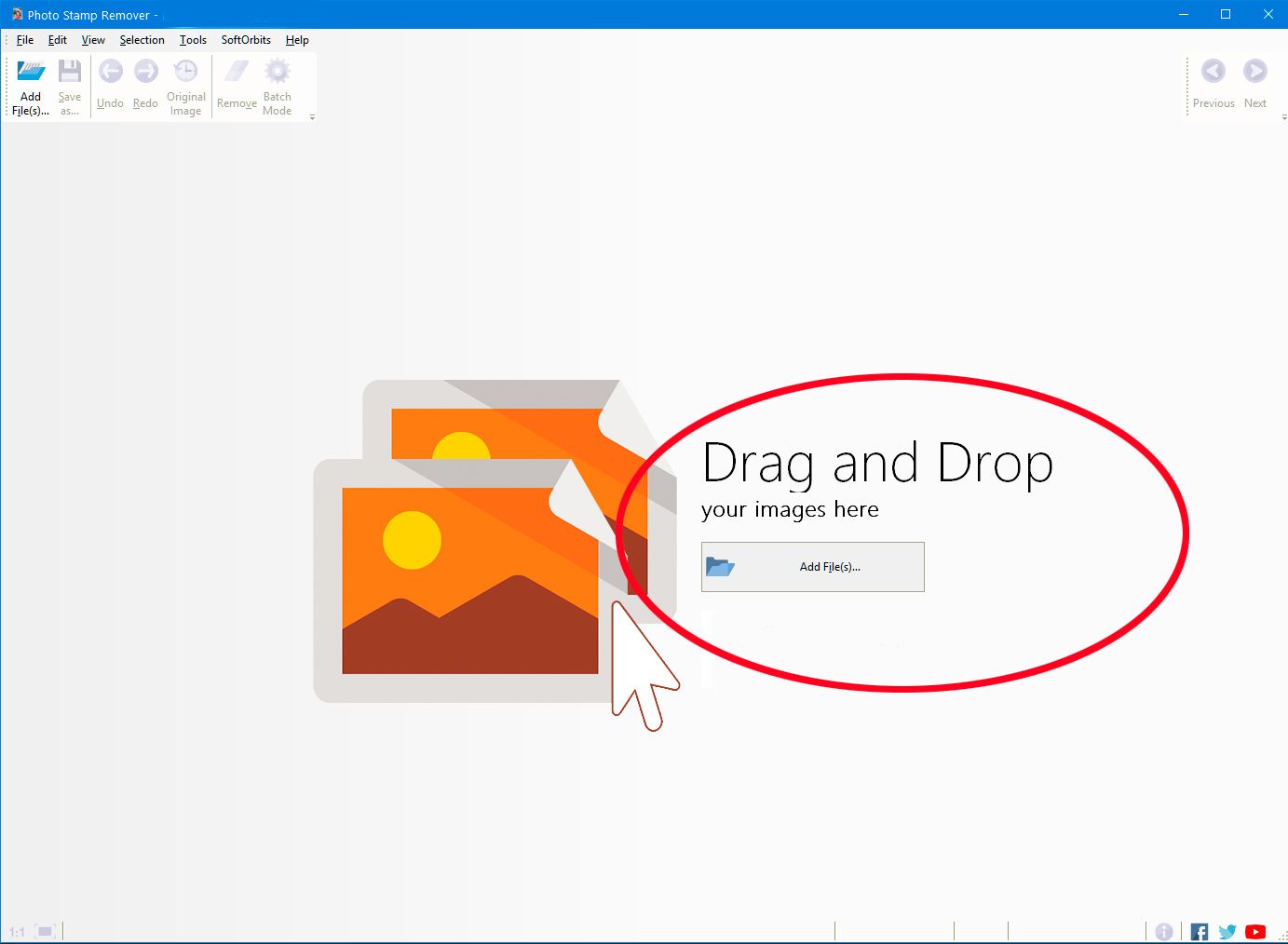 Use the tool to select the text that you want to remove. You can zoom in the image to make sure that the text is carefully selected.

After you have uploaded the Snapchat image, click on the marker tool.

After the text has been selected, click on the Remove button. It will remove the text from Snapchat pictures. 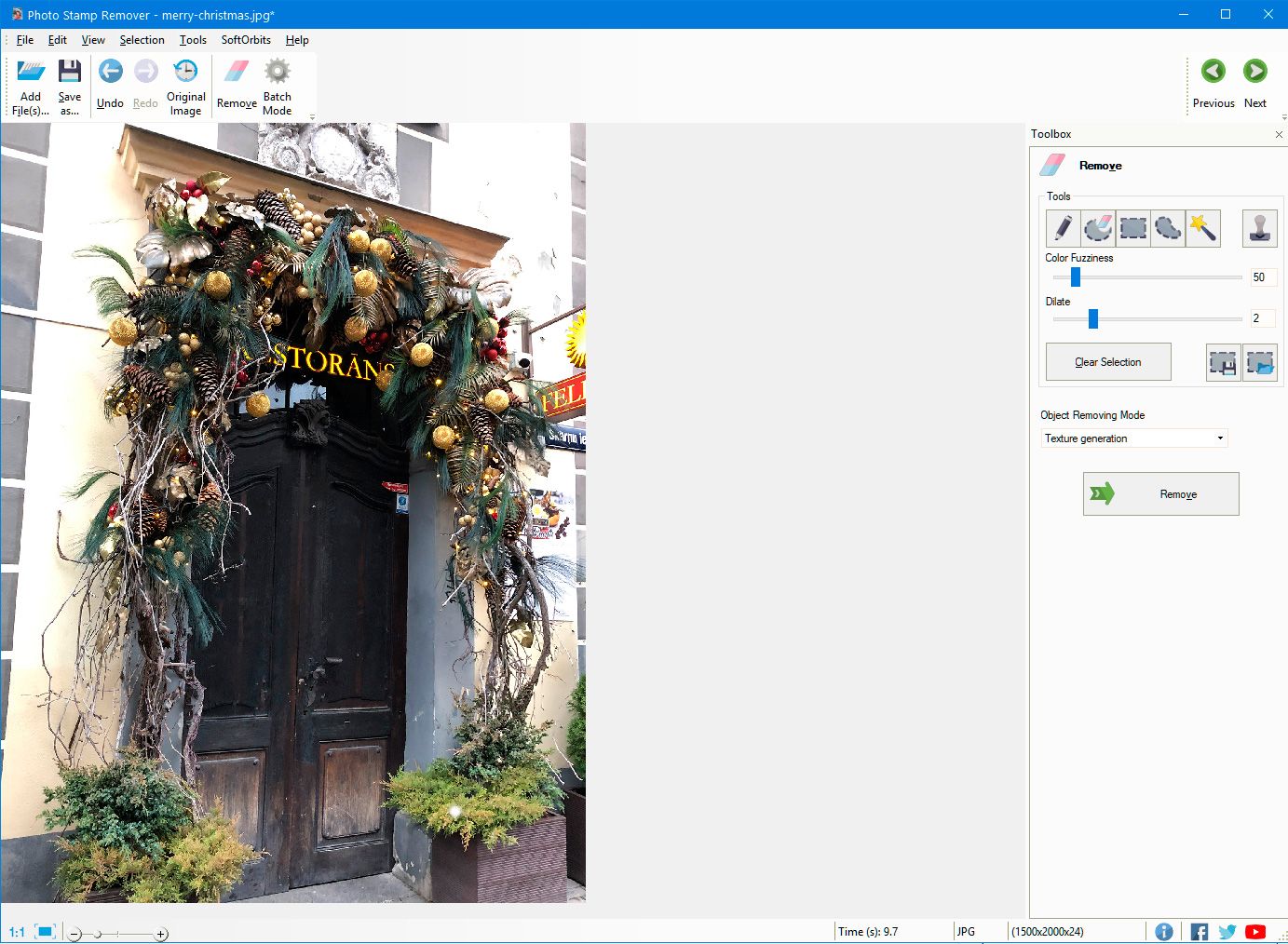 You will get to see a preview of the finished image. You can make more adjustments to it if you want to and when you are done, click on the Save button.
Select the destination folder and click OK. The output Snapchat image without the text will be saved. 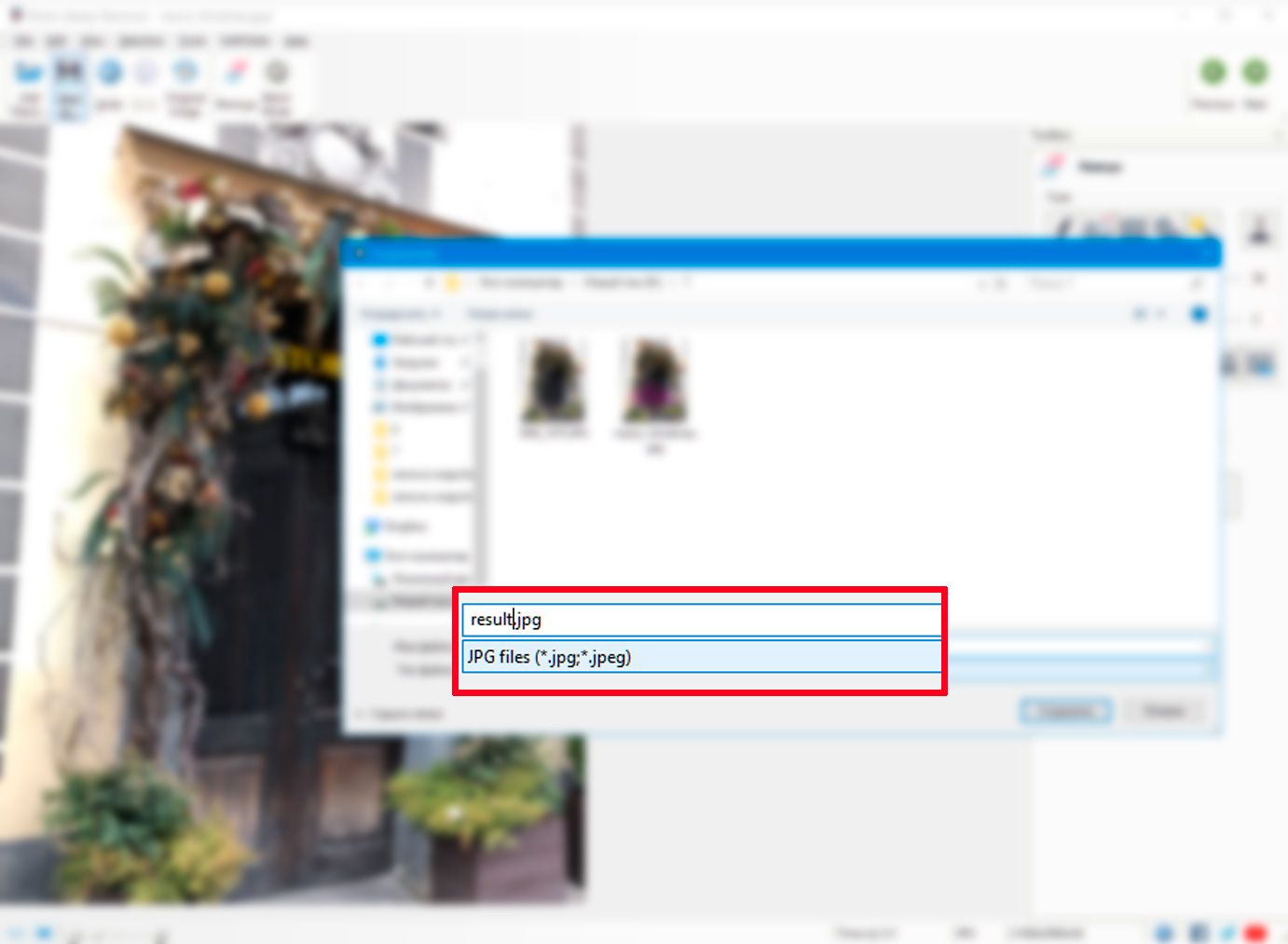 How to Remove Captions from Snapchat Video

Removing watermarks from pictures is easy if you compare it with removing watermarks from videos. Many tools and software provide this option but it is not always nicely done. This is because either it is blurry or the caption shows up in some parts of the video.
This main function of Video Watermark Remover Softare is to delete snapchat captions from videos without any issues.
This snapchat caption remover program also uses a number of caption removing algorithms that makes removing the text from Snapchat videos easier. You just have to click a few buttons and then relax since the software does all the remaining work for you.
Another great feature of this software is that it allows batch watermark removal option. It means that you can remove text or watermark from multiple videos and pictures at a time. This saves a lot of time and energy.

Snapchat is an application that is mostly used in our smart phones. Since downloading a software and then exporting the image or video to the computer might be hard work, there are many applications available that can remove text from snapchat pictures. Such snapchat watermark remover apps are available readily on Google and Apple PlayStore. Some of the popular ones are as follows. 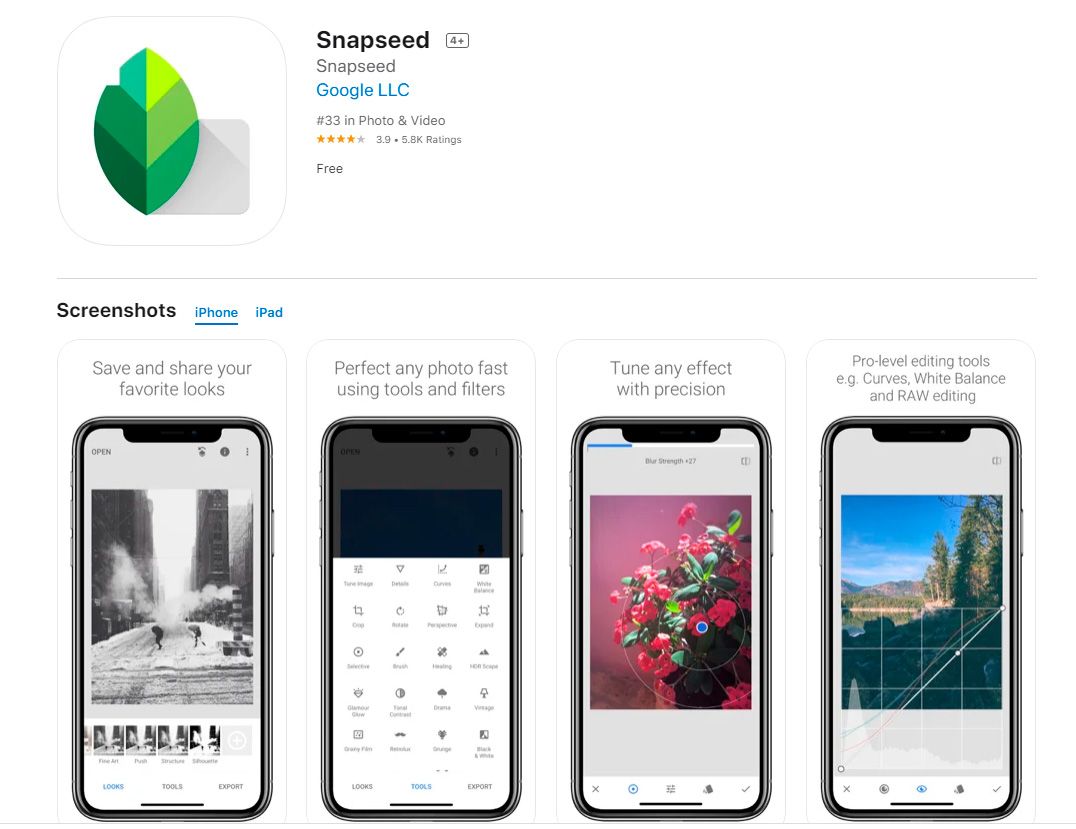 This is an iOS app that removes texts from Snapchat easily without actually damaging the image itself. It provides a healing tool that can remove Snapchat captions without blurring the background. To use the tool, 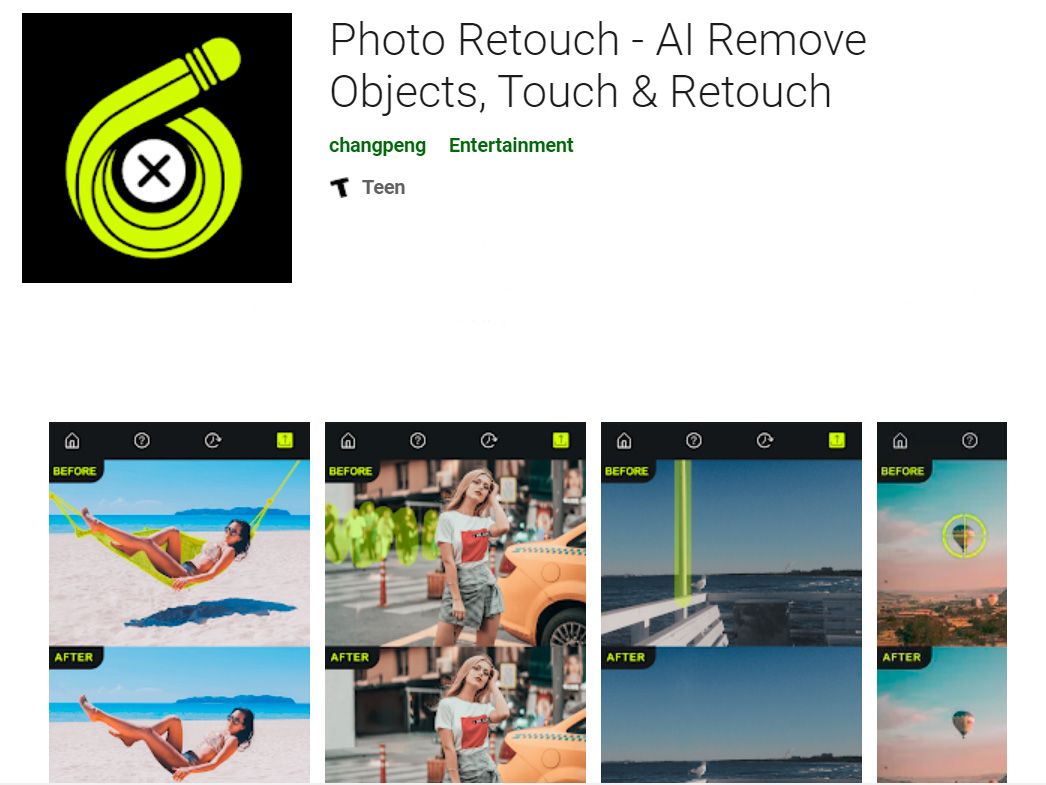 This is an Android application that you can easily download from the Play Store. This app to remove Snapchat caption is popular among users because of its user-friendly interface and ability to remove variety of objects and texts. To remove the Snapchat text you just have to

How to Remove Snapchat Caption Online

Even though there are many online snapchat caption remover tools available that can remove text from Snapchat images easily, some people might not use them. This is because they might not need it every day and downloading a software for a single would feel like a waste of space. In such scenarios, snapchat caption removers that are available online are the best option.
The uploaded images are not saved on any server. Rather they use the JavaScript of the browser which ensures that your privacy is not violated and you are also able to free your Snapchat images from captions.
The most commonly used online tool for removing text from images is the Inpaint.

This tool easily removes the text from the images without leaving any blur marks on the image. Using the tool is really easy. You just have to follow the steps given below.

❓ How to remove Snapchat filter from saved photo?

The simple way to do that is to open the Snapchat application. Then go the Saved Snaps folder. From there open the picture from which you want to remove the filter. Press hold or select the image for a few seconds and a pop-up with advanced options will appear. From the options, select the Edit option. From that option, you can easily edit, change or completely remove the filters without affecting the real image.

❓ How to remove Snapchat caption from screenshot?

If you have a screenshot and want to remove the caption from there, then you might want to download a software. One of the best software for this purpose is the SoftOrbits Snapchat Watermark Remover. The object removal algorithm will easily remove the text from the Snapchat screenshot without blurring the image. You just have to upload the image to the software, select the text area you want to remove and then click on the Remove option. It will cleanly remove the text from the Snapchat screenshot.