How to make a picture less blurry

How to make a picture less blurry. With Easy Photo Unblur, you can fix blurred photos 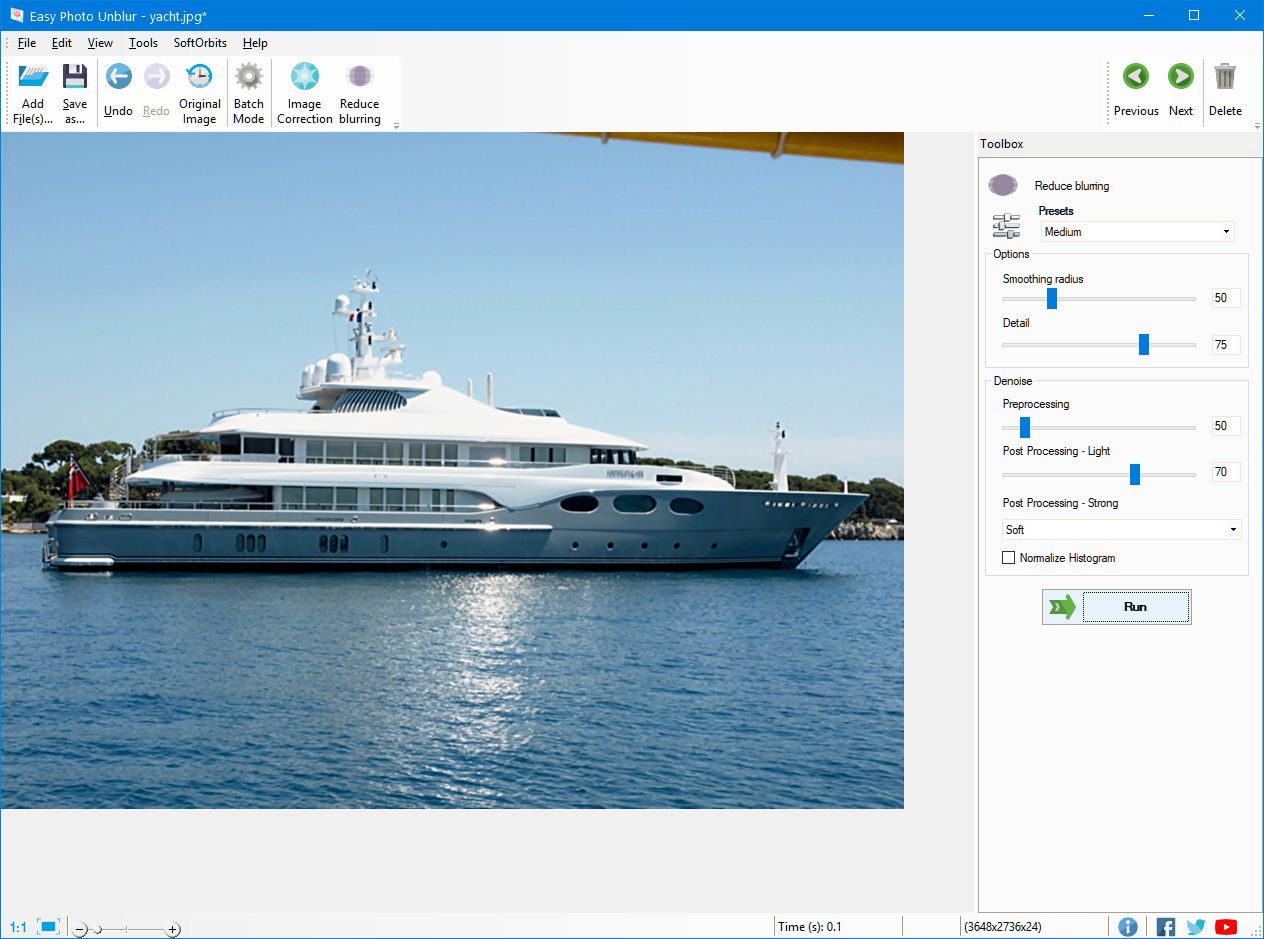 With higher megapixel cameras and image stabilization in almost all lenses, one expects photos to be sharp and in perfect focus. But that doesn’t always happen!
Because of things like camera shake, winds, moving subjects, slower shutter speed or wrong aperture, many photos often turn out to be blurry or unfocused. Even without zooming in, you can see that the subject is slightly hazy.
People think that once focus is missed, the photo cannot be corrected anymore. Sometimes, they increase the sharpness of the image, thinking that the blur will be reduced, but end up with an unnatural HDR-like image.
With programs like Easy Photo Unblur, you can easily learn how to make a picture less blurry. Instead of simply increasing sharpness across the whole image, Photo Unblur uses advanced algorithms to make a picture less blurry at a pixel-level, instead of merely sharpening everything.
Let us learn how to use this software to sharpen photos and get back perfect focus! 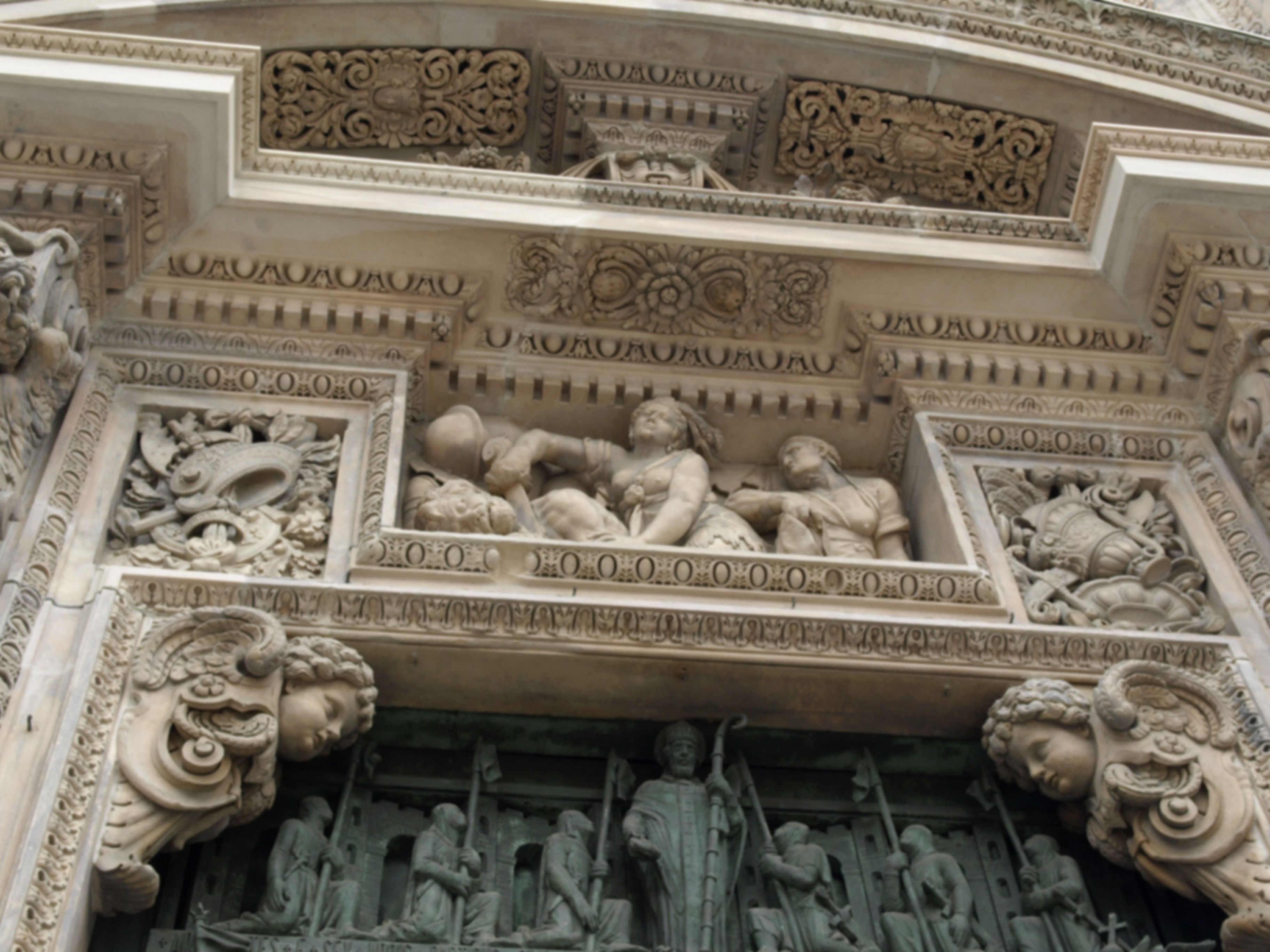 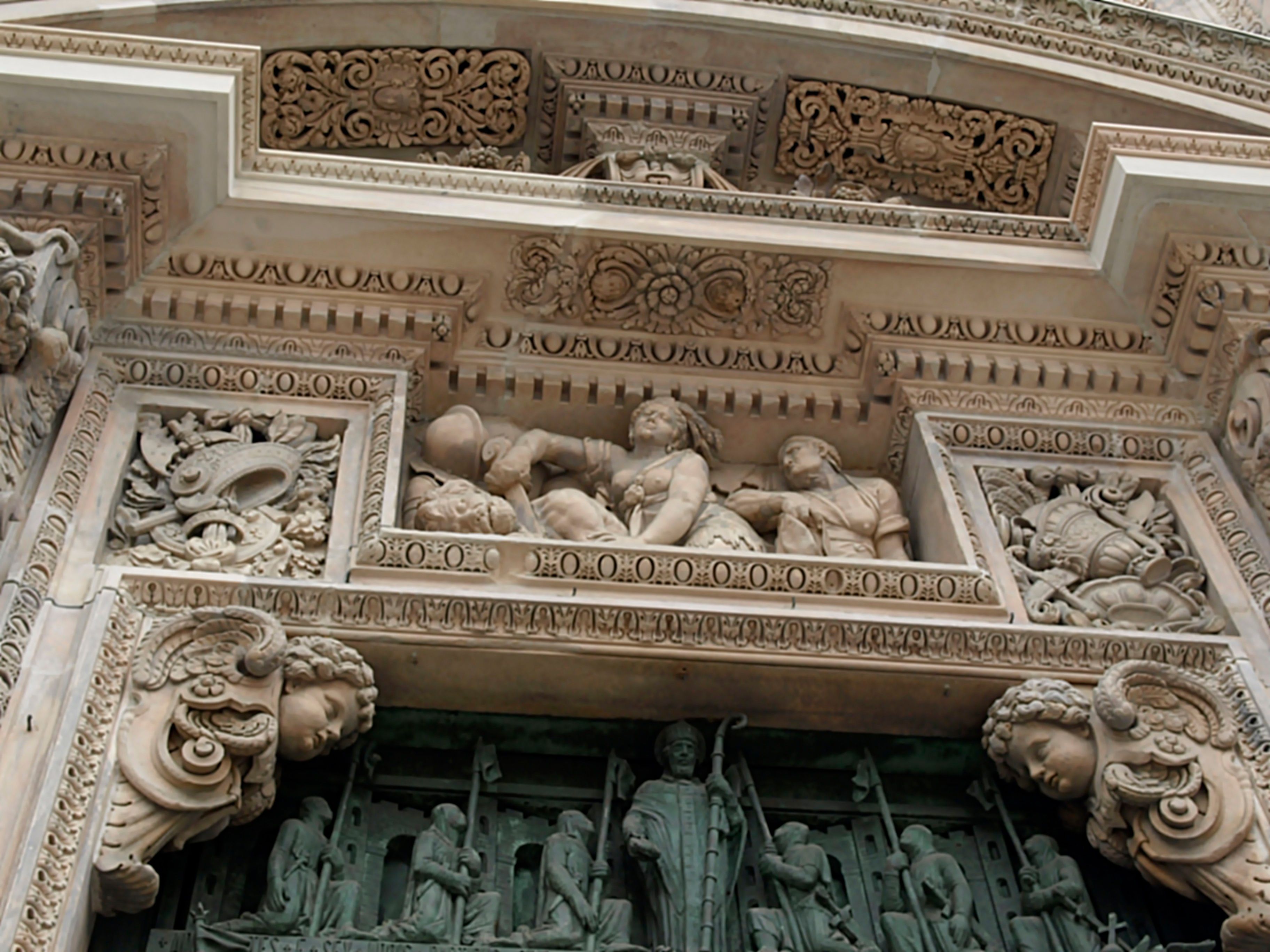 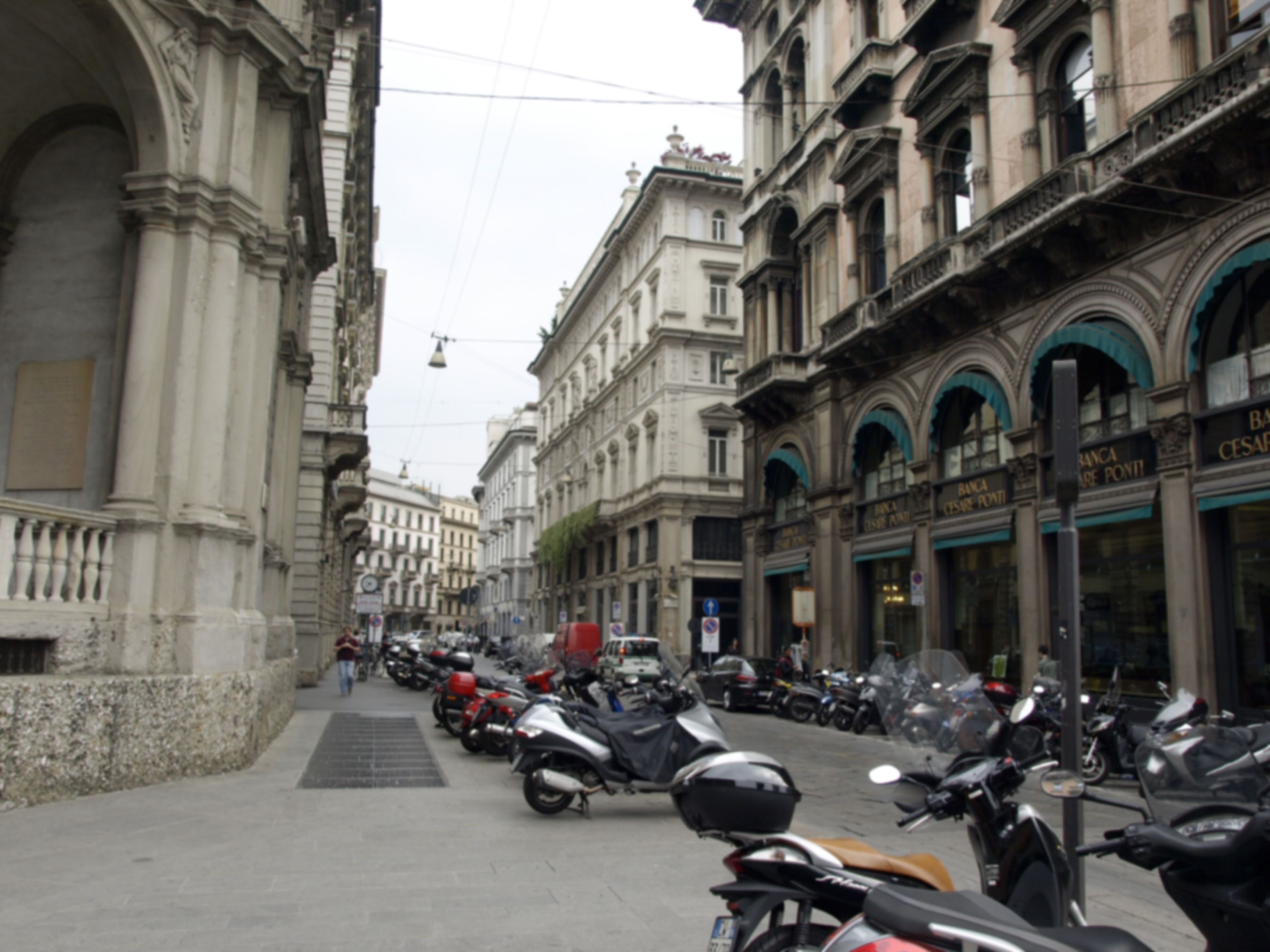 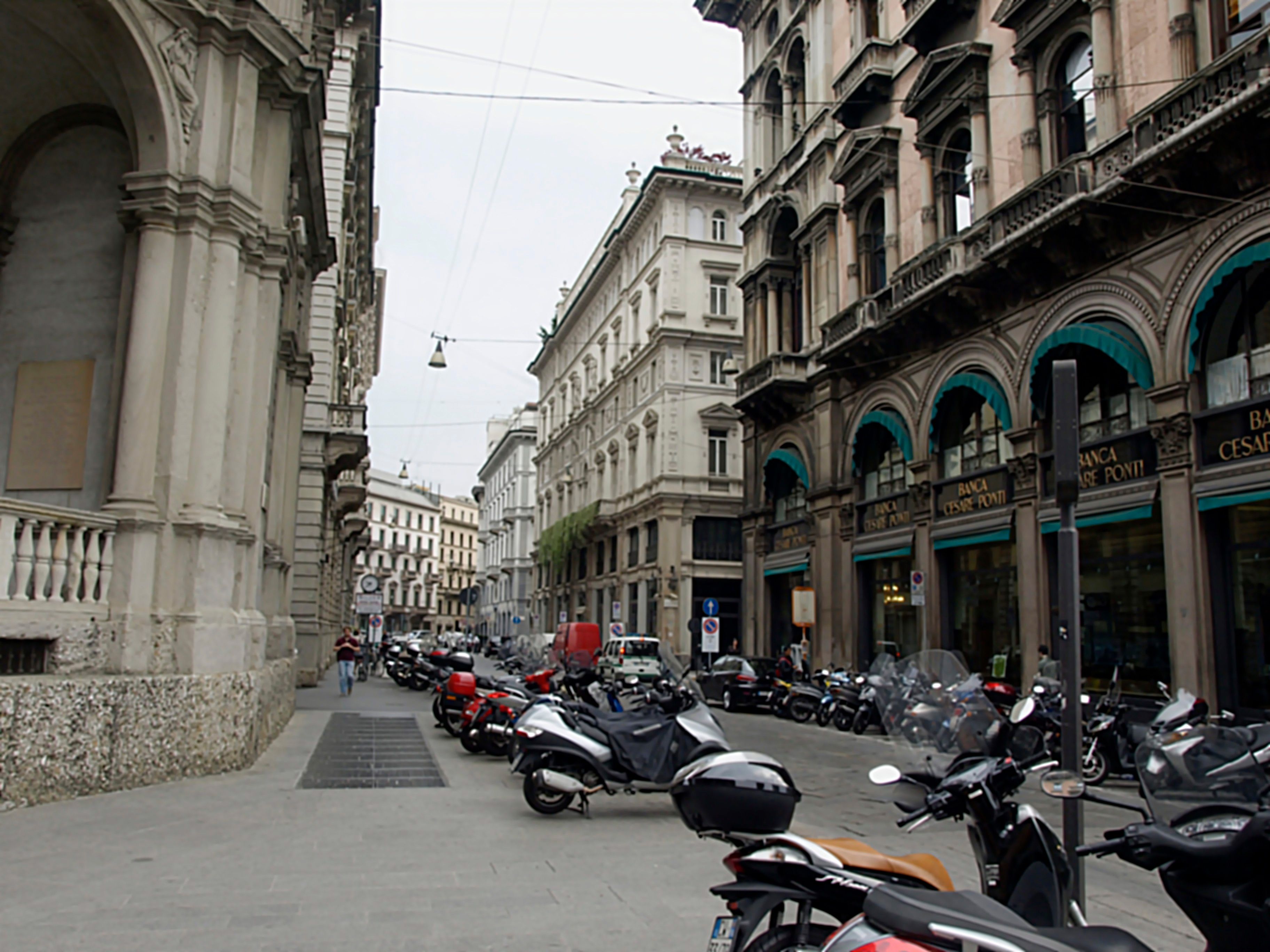 Easy Photo Unblur is a special tool designed only to fix photos where the focus has been missed or there’s a lot of camera shake.
Using blind deconvolution technology, this program analyses the pixels and figures out the true position of the subject, so that it can make a picture less blurry around it.
Instead of simply adding sharpness to the whole image, Easy Photo Unblur will adjust the focus to unblur image itself. It can even reverse lens blur and Gaussian blur applied in photo editors!
It also has useful tools like de-noising for reducing image noise, and batch mode to edit many photos at once.

Here are the steps you will have to follow for using this program!

The first thing to do is download SoftOrbits Easy Photo Unblur and install the application. Once you open it, you can use the Add File button or just drag and drop your photo to get started. 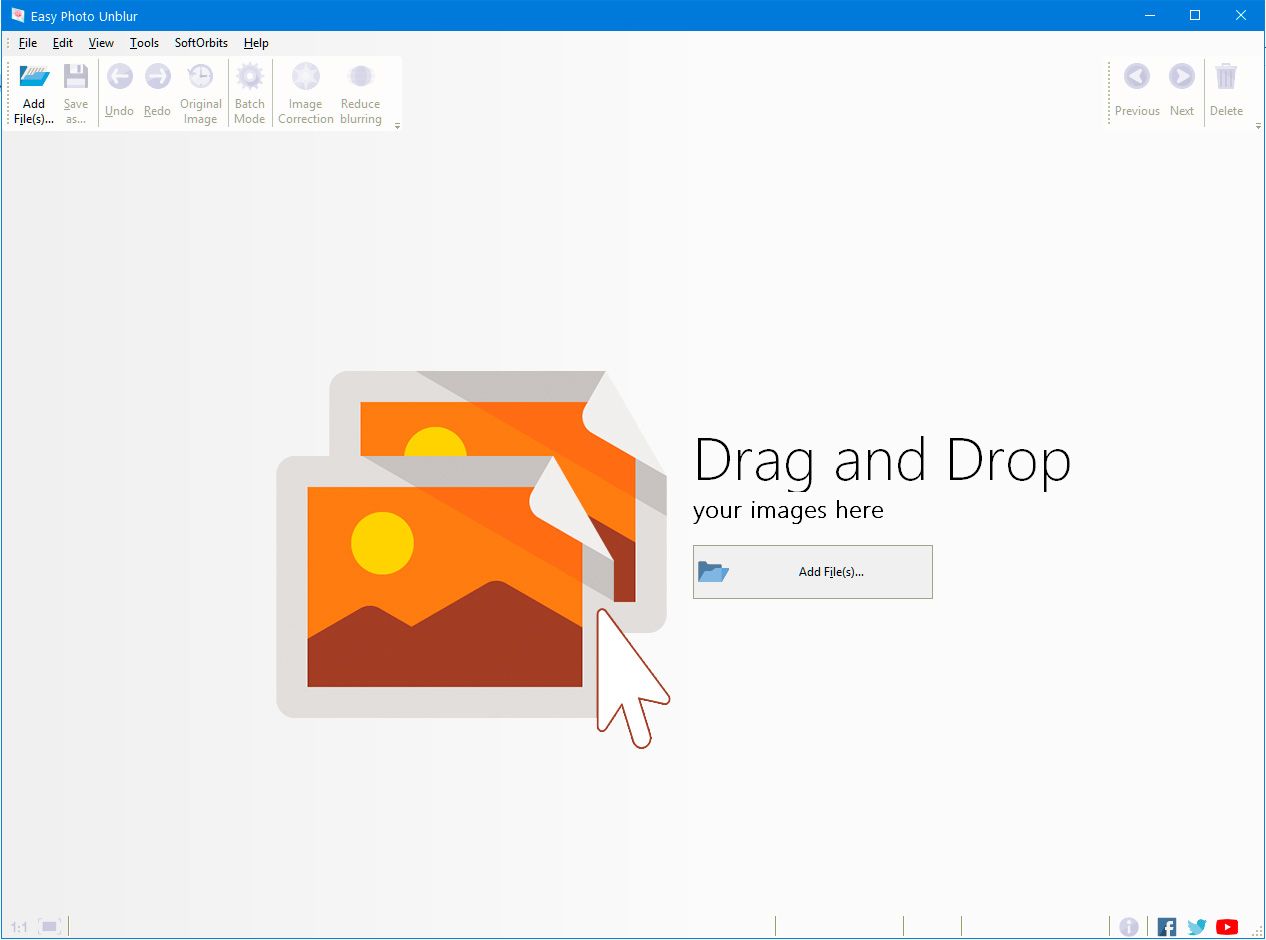 Inside the toolbar at the top, you’ll see the option Reduce Blurring. Click on this to open a smaller toolbar on the right, from where you can select the presets and adjust the controls.
Easy Photo Unblur gives you five presets to choose from – Light, Gentle, Soft, Medium and Strong. For most photos, soft or medium presets work well, and will give you a usable image at least for social media.
As the program has an undo button and gives a preview of the final image, you can experiment with different options as much as you like. 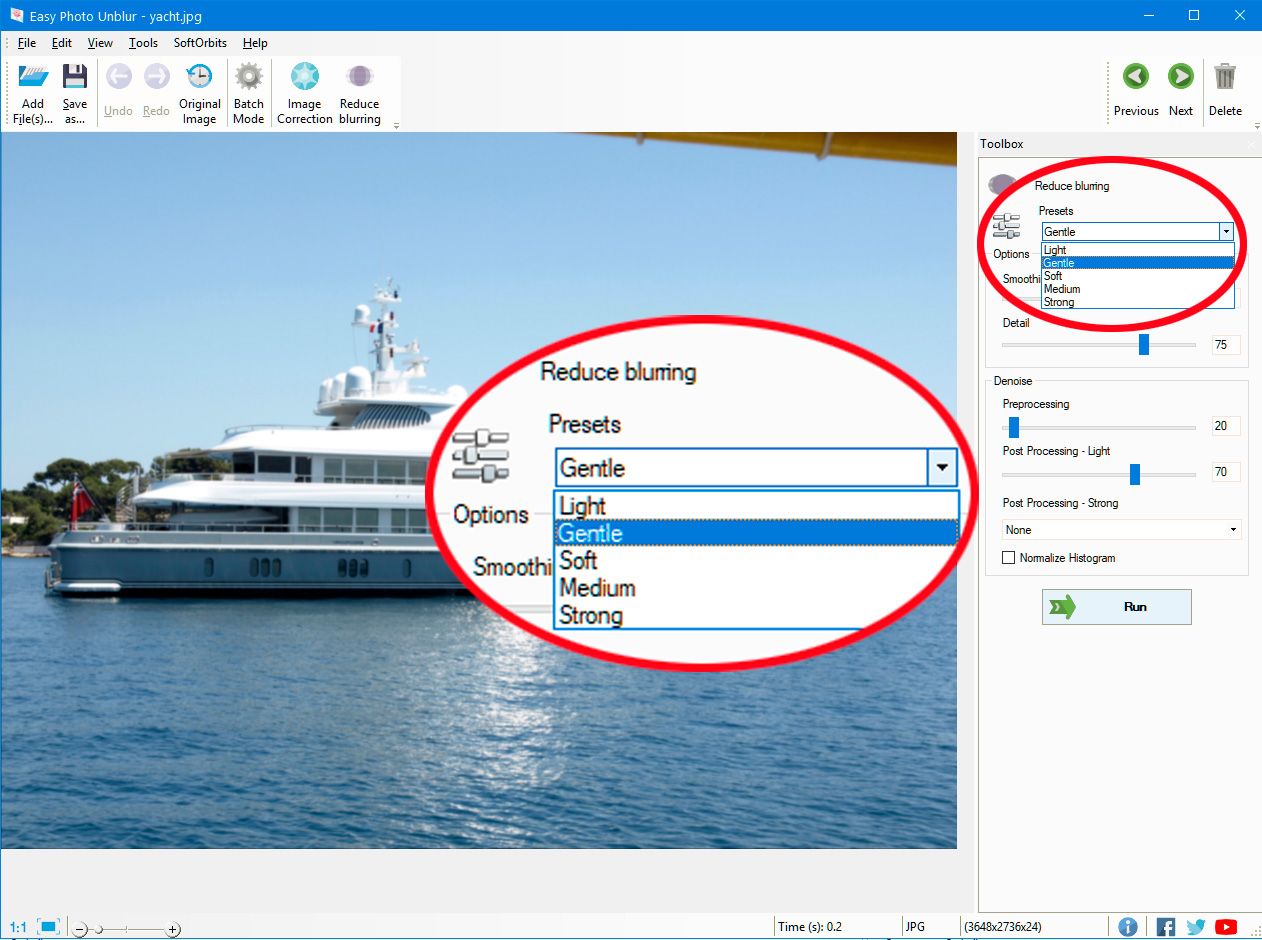 After you have selected the preset, you can adjust the finer settings. You get two options here – smoothing radius and detail.
Smoothing radius affects the outlines in the image. Increasing the size will mean that the outlines become more smooth and blended, instead of being distinct like in an HDR photo. Generally, you should keep this in the middle, neither high nor low.
Like the name suggests, detail affects the overall sharpness and structure of the image. Increasing the detail level will give more clarity and definition. However, you should not overdo this too! 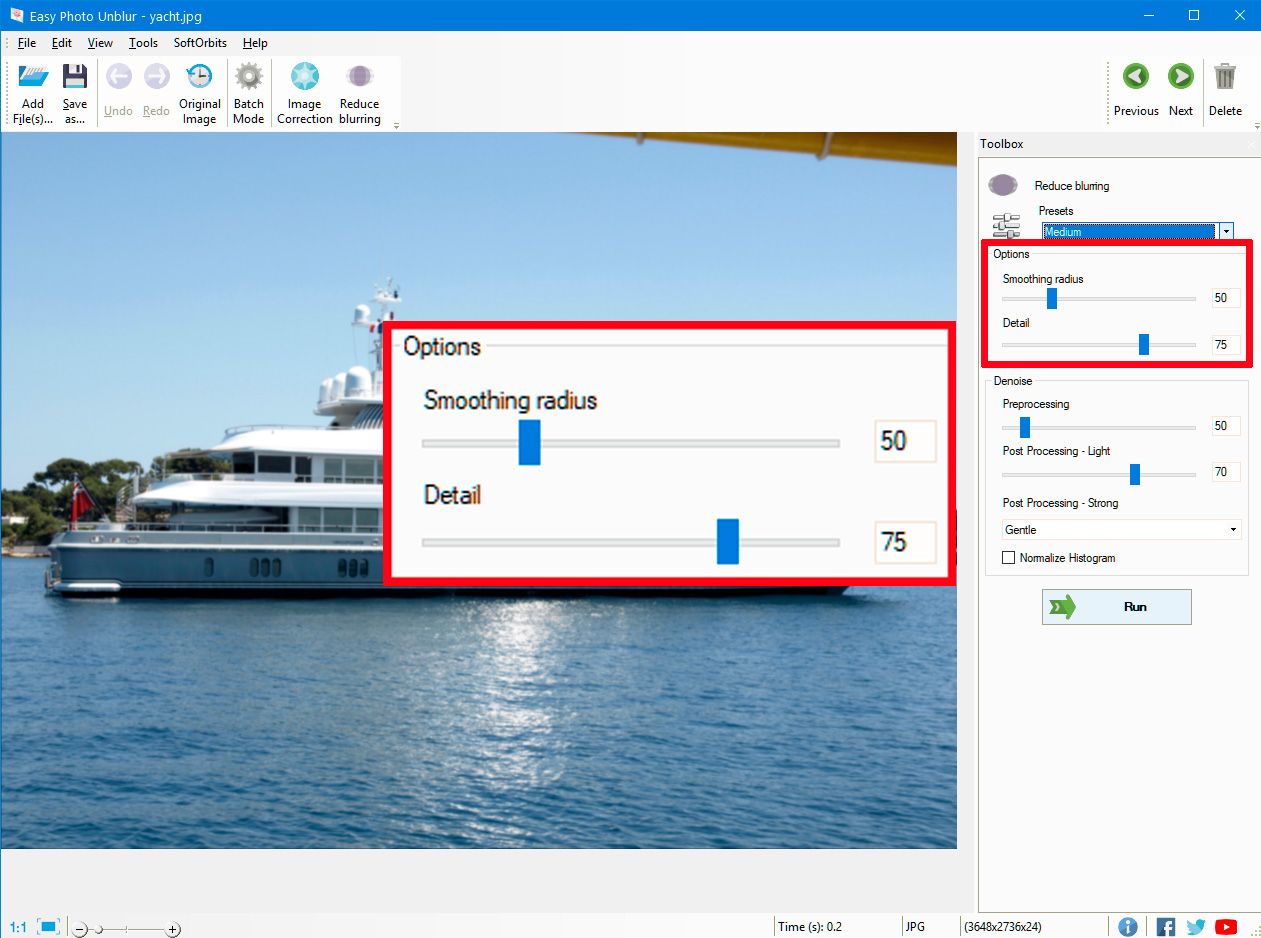 This is an optional step that you can use in case you see any noise or spots appear in the image after the blurring is removed.
You can adjust the level of de-noising and the strength that will be applied using the slider. 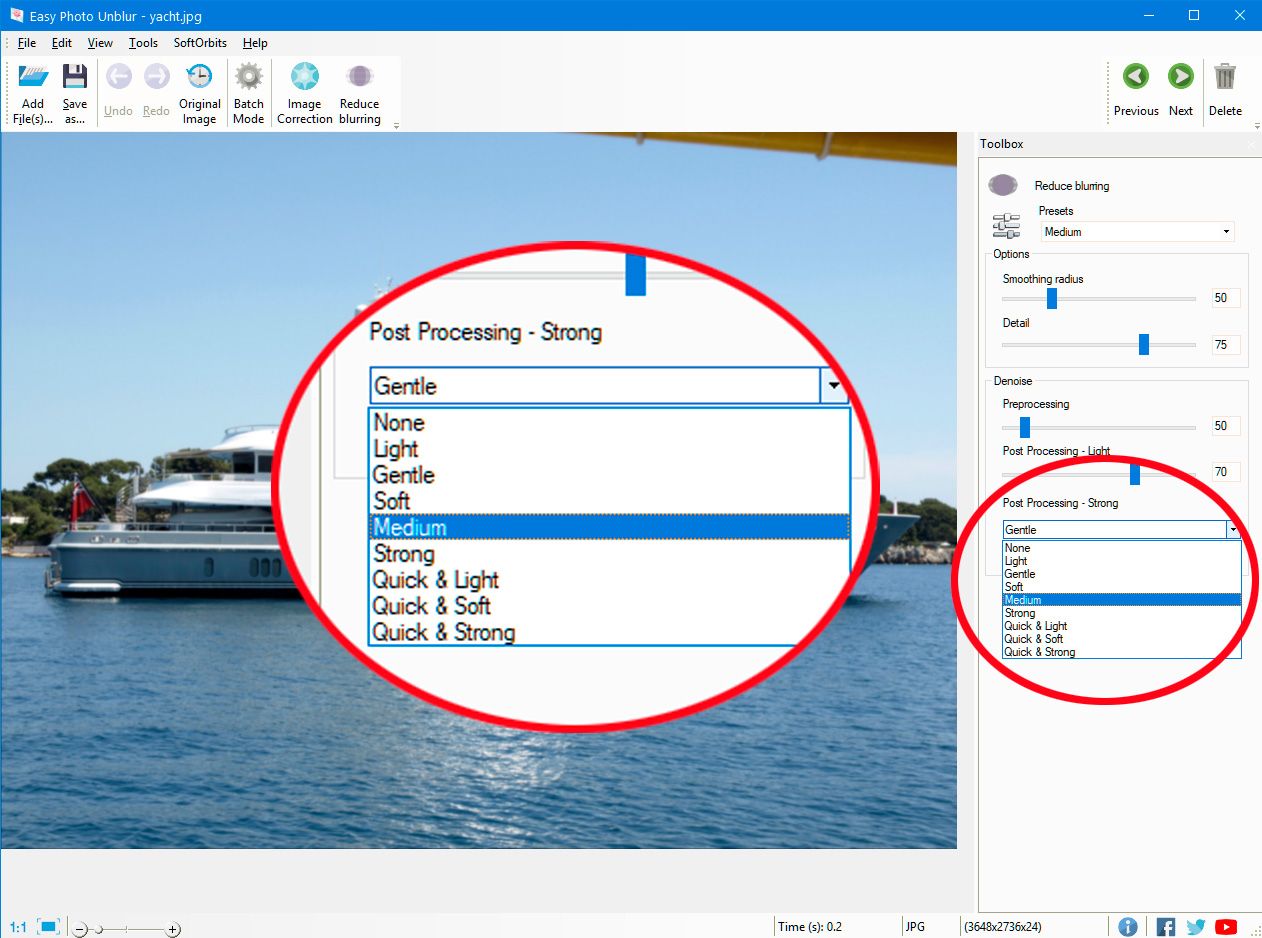 This too is an optional step. Along to make an image less blurry and removing noise, Easy Photo Unblur also has basic image editing options.
Click on Image Correction in the toolbar on top, and you will see options to adjust brightness, contrast, saturation, temperature, tint and gamma. There is also an option to Normalize Histogram which will fix the exposure for you automatically. 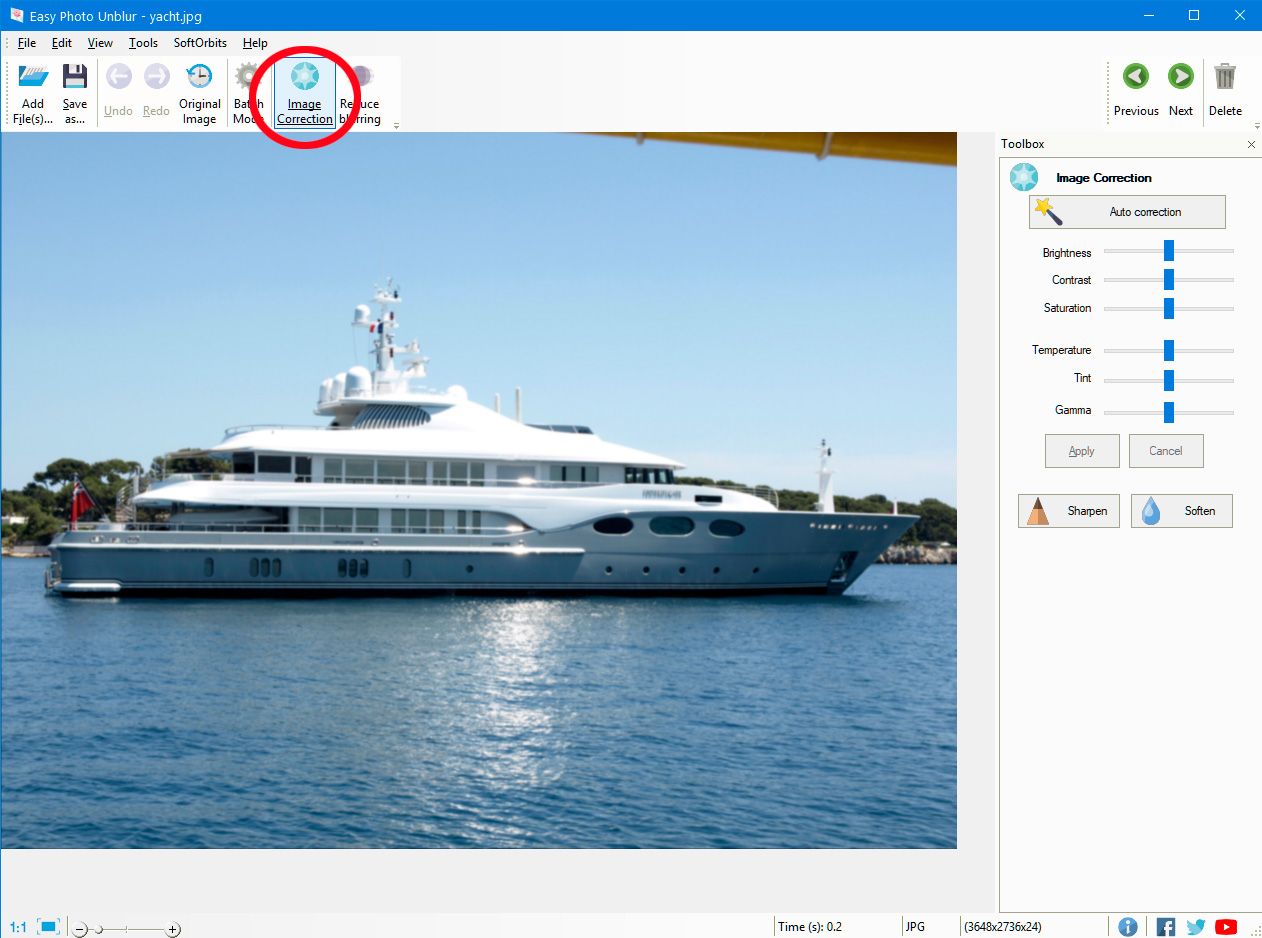 As soon as all your adjustments are done and you are happy to make a picture less blurry, you can click on Run. After a few seconds, your final image will be ready!

If you have lots of similar photos to edit, you can save time by using Batch Mode and processing them all at once.
While adding files which you wish to edit, all you have to do is simply select multiple photos. Add all the images you want to process and follow the same steps as before.
Once your settings are set, click on the option of Batch Mode in the toolbar. Easy Photo Unblur will edit all the selected photos in one go! This feature is useful when you have many photos taken with similar settings and blurring, as one preset will work for all such images and fix them without a fuss. 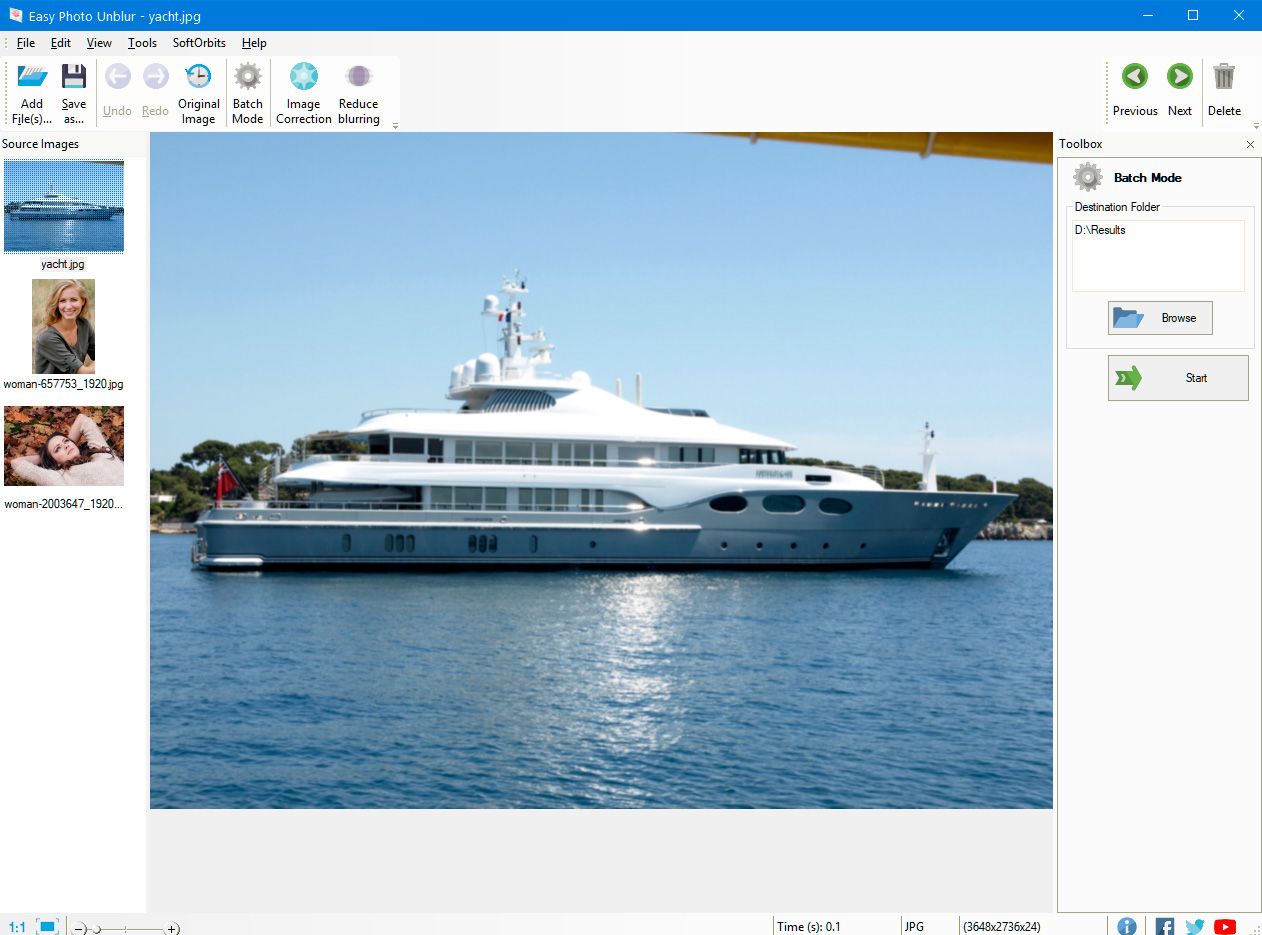 How to make an image less blurry in Photoshop?

Making a picture less blurry in Photoshop is slightly more complex, unlike Easy Photo Unblur.
But Photoshop has a unique feature called Smart Sharpen, which lets you selectively sharpen the edges in your photo in great detail. And because the algorithms of Photoshop are highly advanced, you will get great results.

Make the layer a smart object

A smart object keeps the settings editable, and does not make permanent changes to your original image. This is why it’s important to change your image layer into a smart object.

Go to the Layers panel, where your image will be present as the background layer. From the top-right corner, select the Menu button and click on Convert to Smart Object. 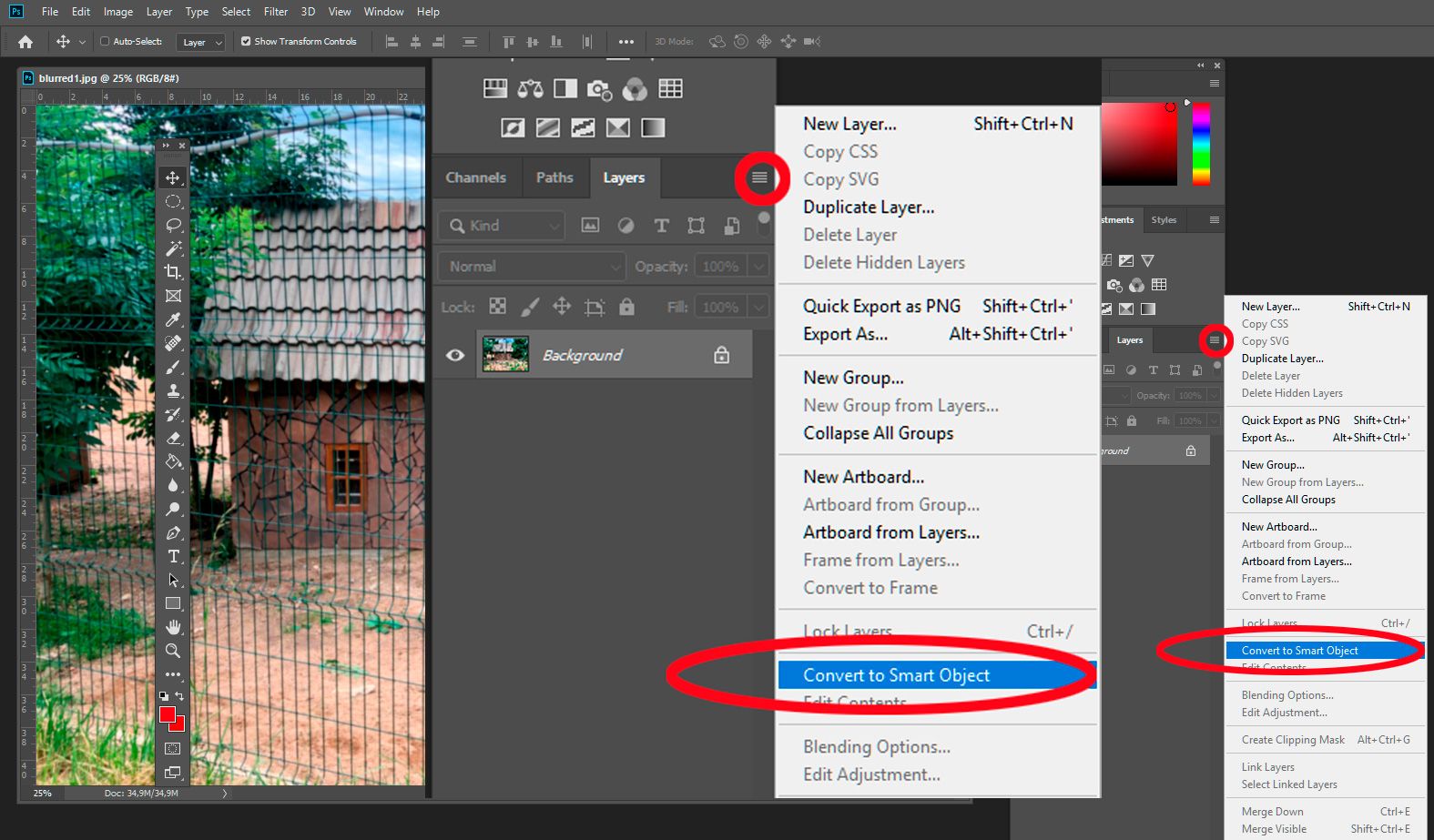 Open the Filter menu, where will be able to select Sharpen > Smart Sharpen.

As soon as you select the filter, a window will open which will allow you to adjust the sharpness settings and even give a close-up preview of the image.

You can even make this sharpen window bigger, so that you are able to a bigger preview of your subject and make adjustments accurately. 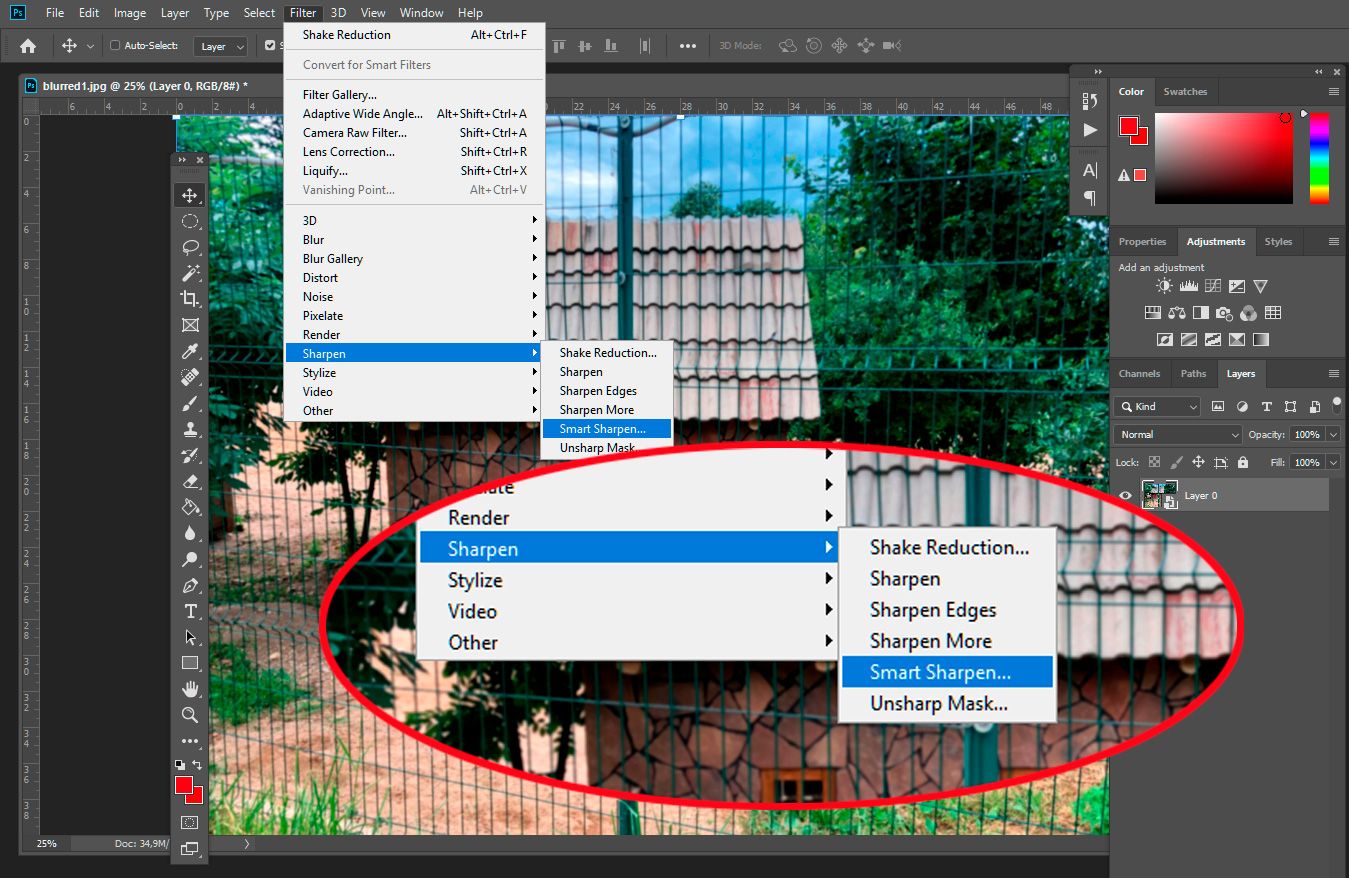 In the dialogue box you just opened, there will be a setting called Remove.

Ensure that Remove is set to Lens Blur. This helps Photoshop detect the edges and outlines of your subject in the photo. In case the blurriness in your image is caused by motion or camera shake, you can also try out the Motion Blur option to make a picture less blurry. 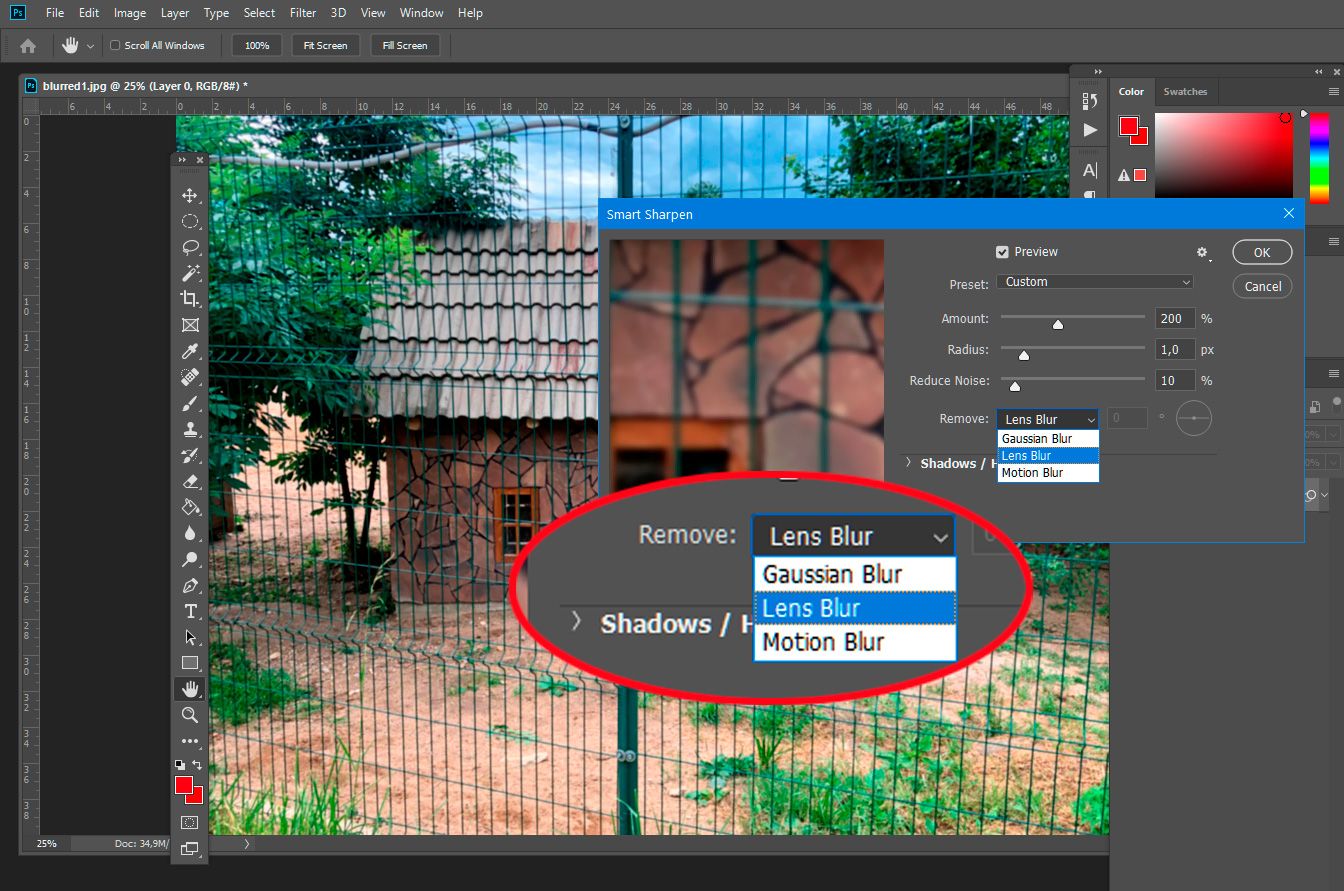 This is the step where you will actually increase the sharpness of your photo.

By increasing the Amount value, you will add contrast to the the edges of your subject. This will add to its sharpness and bring it in focus. Usually, 300% is enough to make photos less blurry!

A useful tip is to keep comparing the original image with the edited one. By simply clicking on the preview and holding the mouse button, you will be able to see what the original photo looked like. 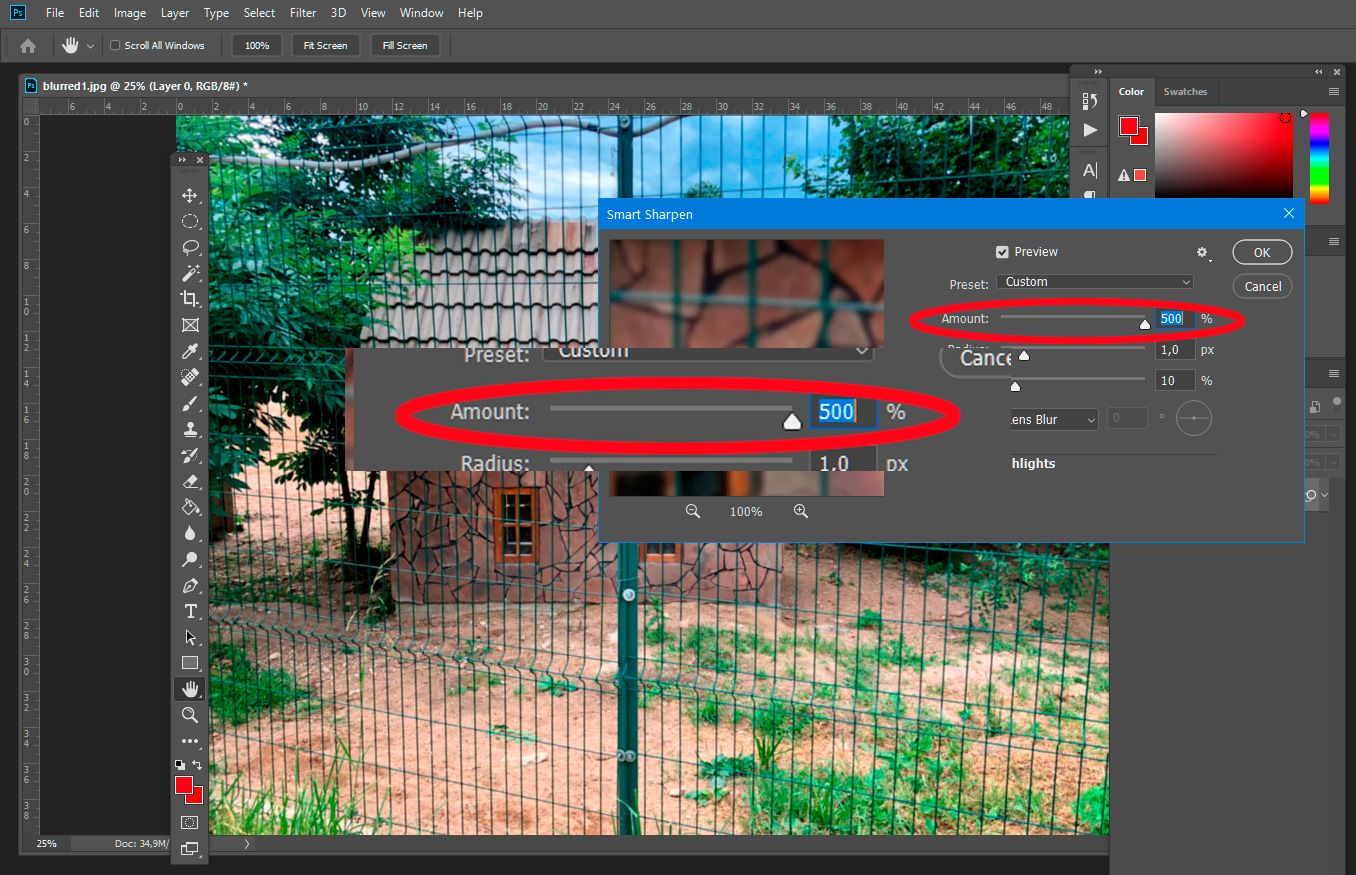 Along with increasing the contrast at the borders, you also have to adjust the radius. Increasing the radius amount will help in making the borders thick, so that the subject clearly stands out against the background.

For most photos, a radius value of 1 or 2 works best. You should not make the value too high, as it will cause the subject to get a halo around it, which makes the photo look very unnatural. 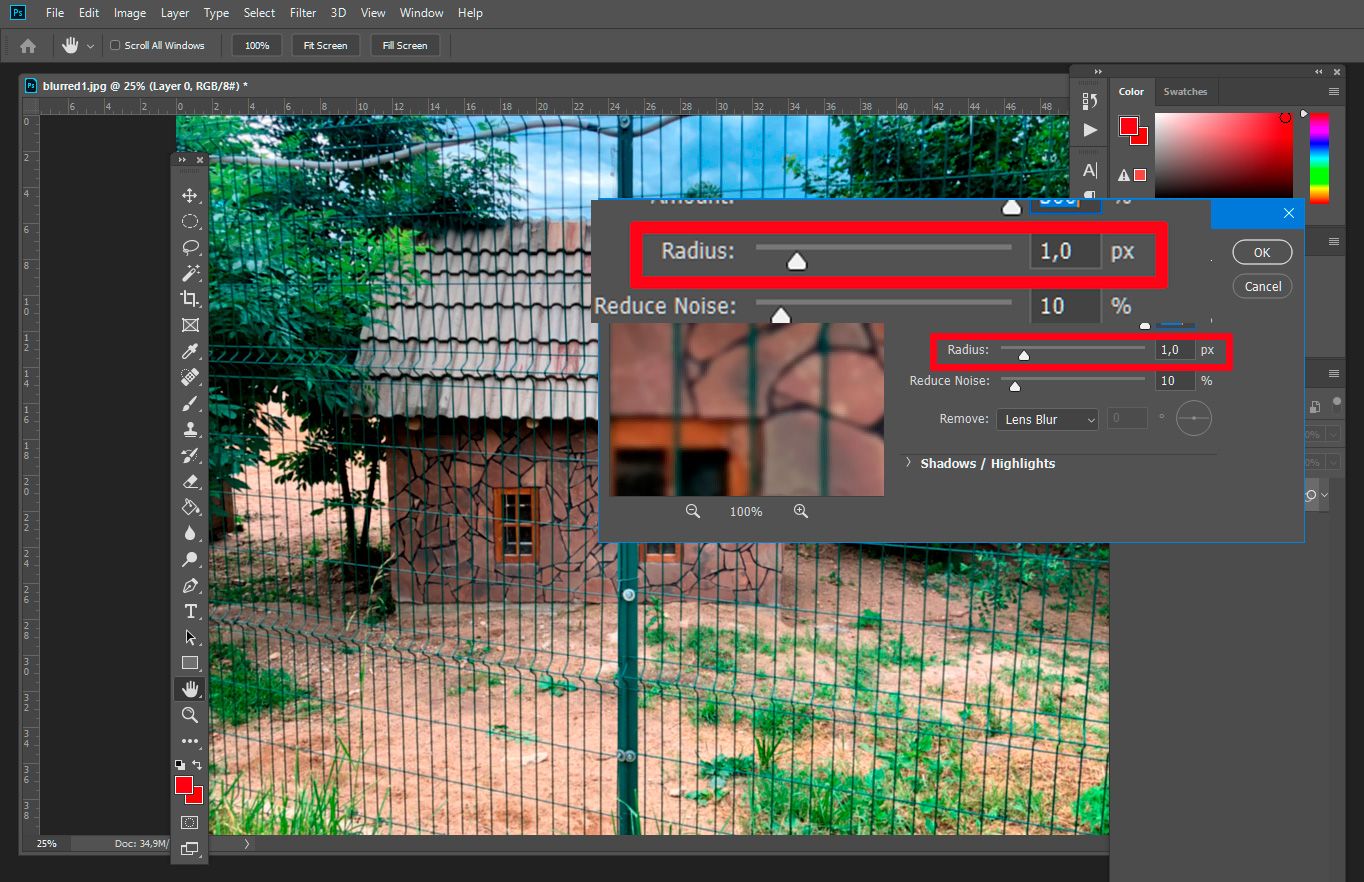 Within the same dialogue box, you should also see a Reduce Noise slider. By increasing this, you can make the image cleaner and smoother.

A value of about 15-20% should be sufficient. If you reduce noise too much, the image will start looking too smooth and the details will be lost, so be careful! 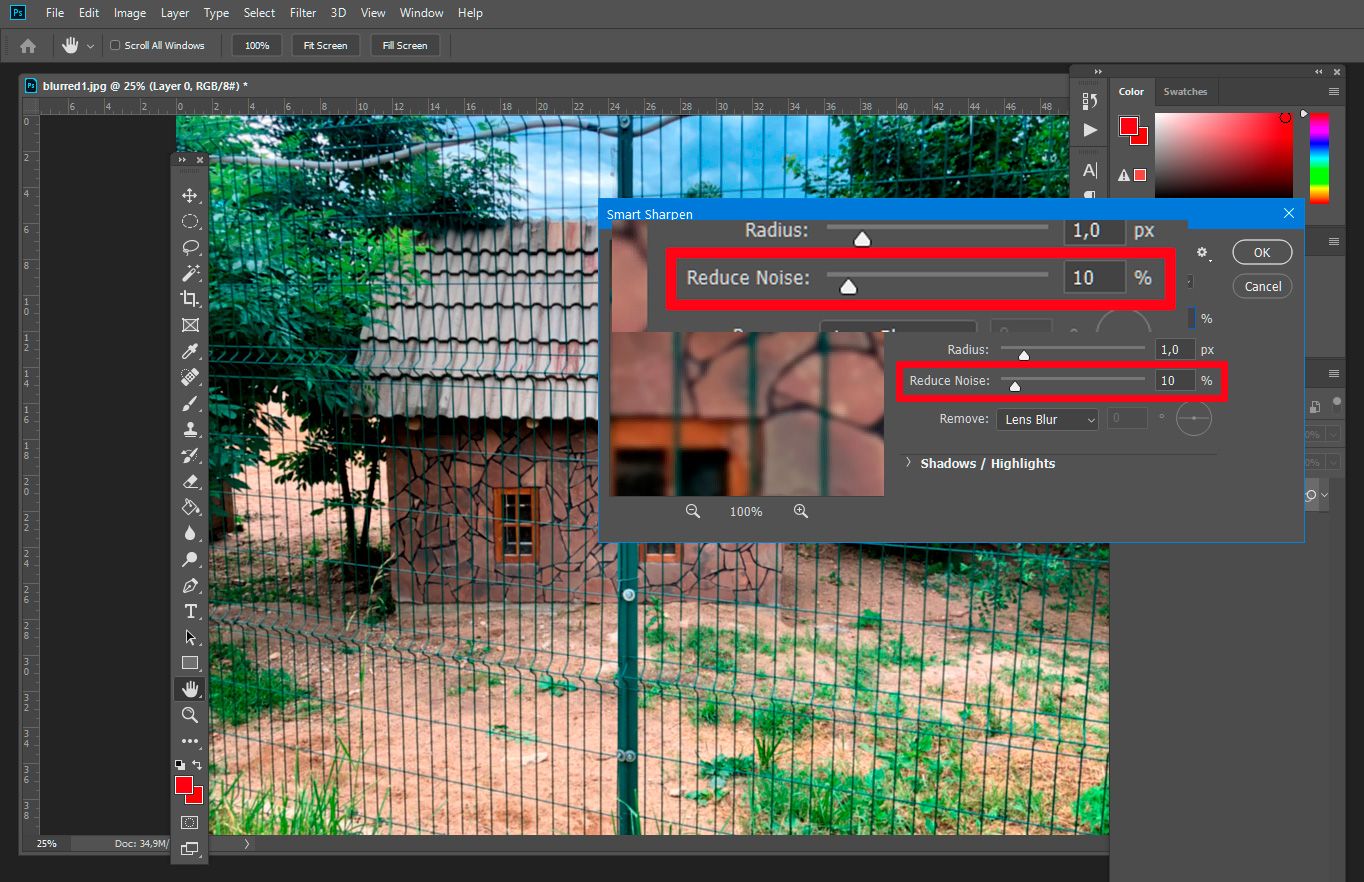 Almost done, this is the last step to make a picture less blurry!

Go the Layers panel again, and at the bottom of your smart object layer, you will see the blending icon. Click on this, and change the blend mode to Luminosity.

This step is very important because it prevents Photoshop from sharpening the colour in the image, which will cause artifacts and colours distortions. By using the Luminosity blend, the pixels are sharpened by their brightness, not colour. 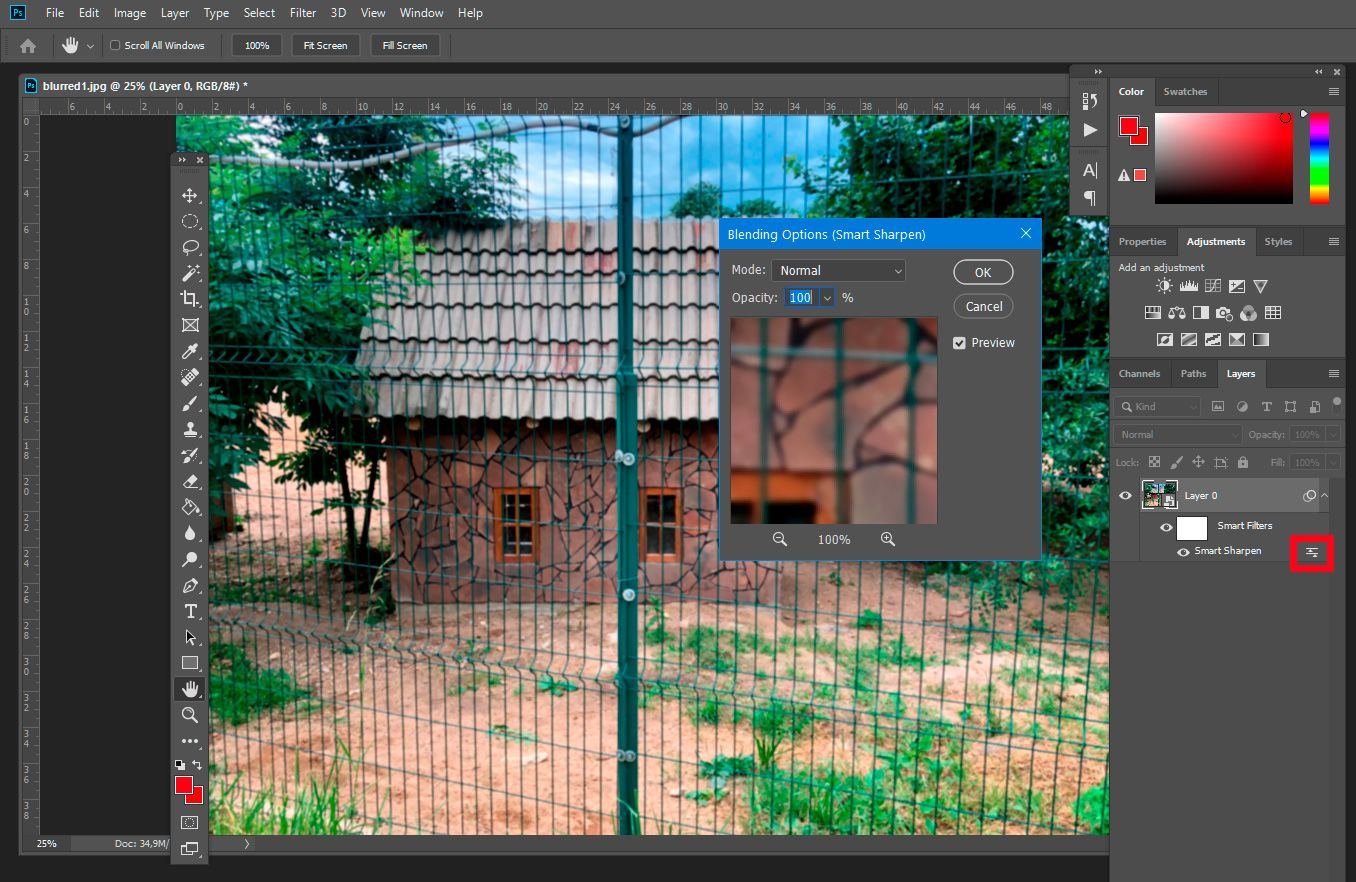 When you’re done, click OK to close the Smart Sharpen window, and save your image!

While programs like Easy Photo Unblur and Photoshop are advanced and give excellent results, we may not always have time for that.
If you need a quick fix or want to edit photos on your phone on the go, you can try out these apps for making photos less blurry! 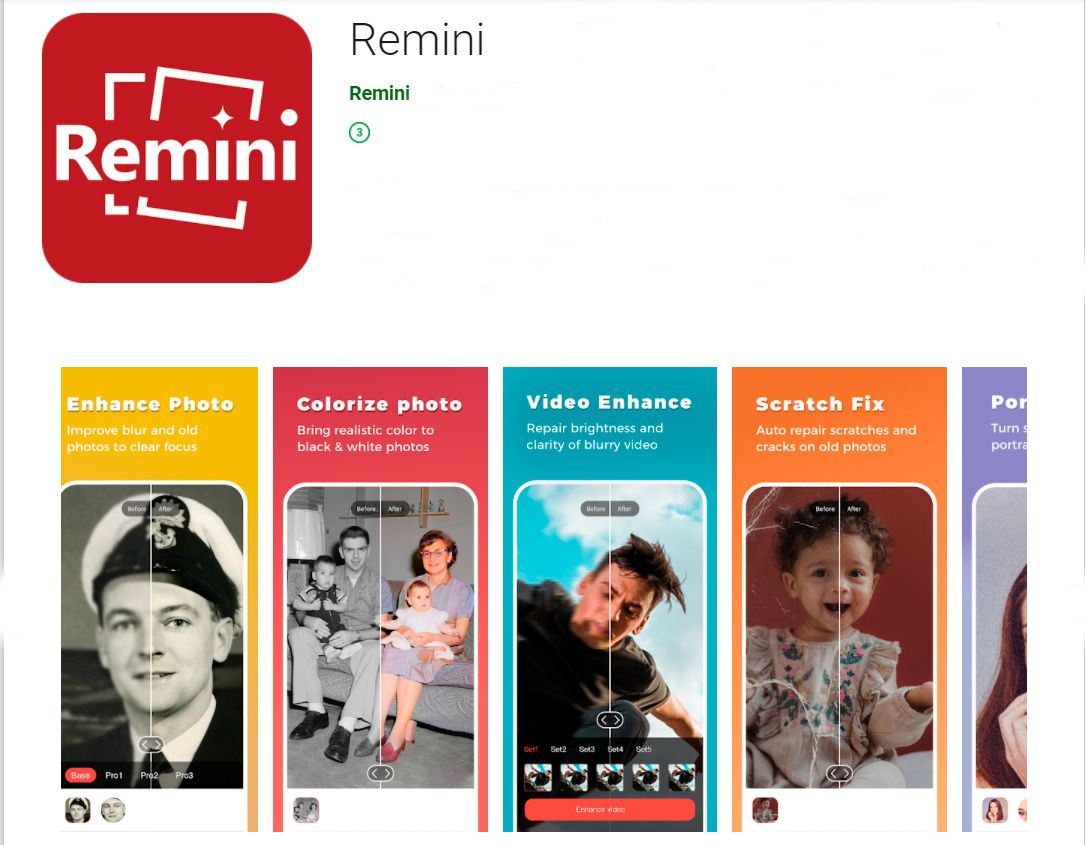 This tool can help you to make a picture less blurry for free on the Android play store, Remini Photo Enhancer is a one-click app for fixing any type of image. It can take blurry or shaky photos and make them pin sharp automatically!
Along with improving clarity and sharpness, Remini also has extra features like colourizing black and white photos and improving skin texture and smoothness in portraits. In fact, you can use this app to even fix videos and add filters like pencil drawing and painting effects!

Enhance It: Fix Your Photo 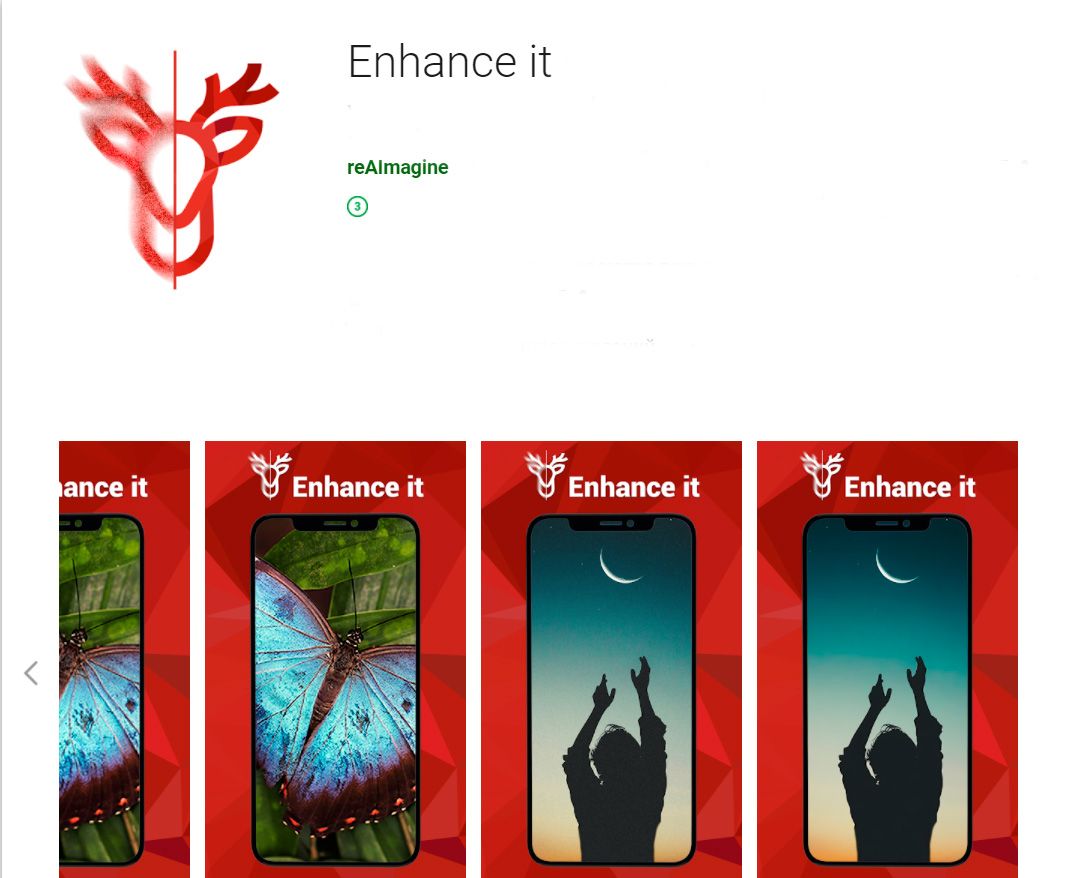 Similar to Remini, Enhance It is also a photo enhancer that can turn blurry and low quality photos into sharp images. Along with motion de-blur tool, this free app also has a de-noising feature and a ‘Super Resolution’ mode to scale up low resolution photos.
When you upload a photo on this app for editing, it is sent to a server online, which actually processes the image and sends the result back. Although there are a few ads to deal with, the results are great!

Along with dedicated software and smartphone apps, you can also make pictures less blurry online, using free websites. All you’ll need is an internet connection, and you can edit your photos from anywhere!

Raw.Pics is a photo converter and editor rolled into one. You can change the format of your RAW files into normal JPG photos, and also use it’s image editor toolbar to make changes to the brightness, contrast, saturation etc. along with curve adjustments.
Although this program is online and free to use, it offers only a basic sharpening feature. Unlike Easy Photo Unblur and Photoshop, it does not use complex algorithms to increase sharpness selectively, and you cannot select the radius thickness.
Since it is free and very easy to use, Raw.Pics is still a good choice for fixing the blur and softness in photos.

All you need to do is follow these steps: 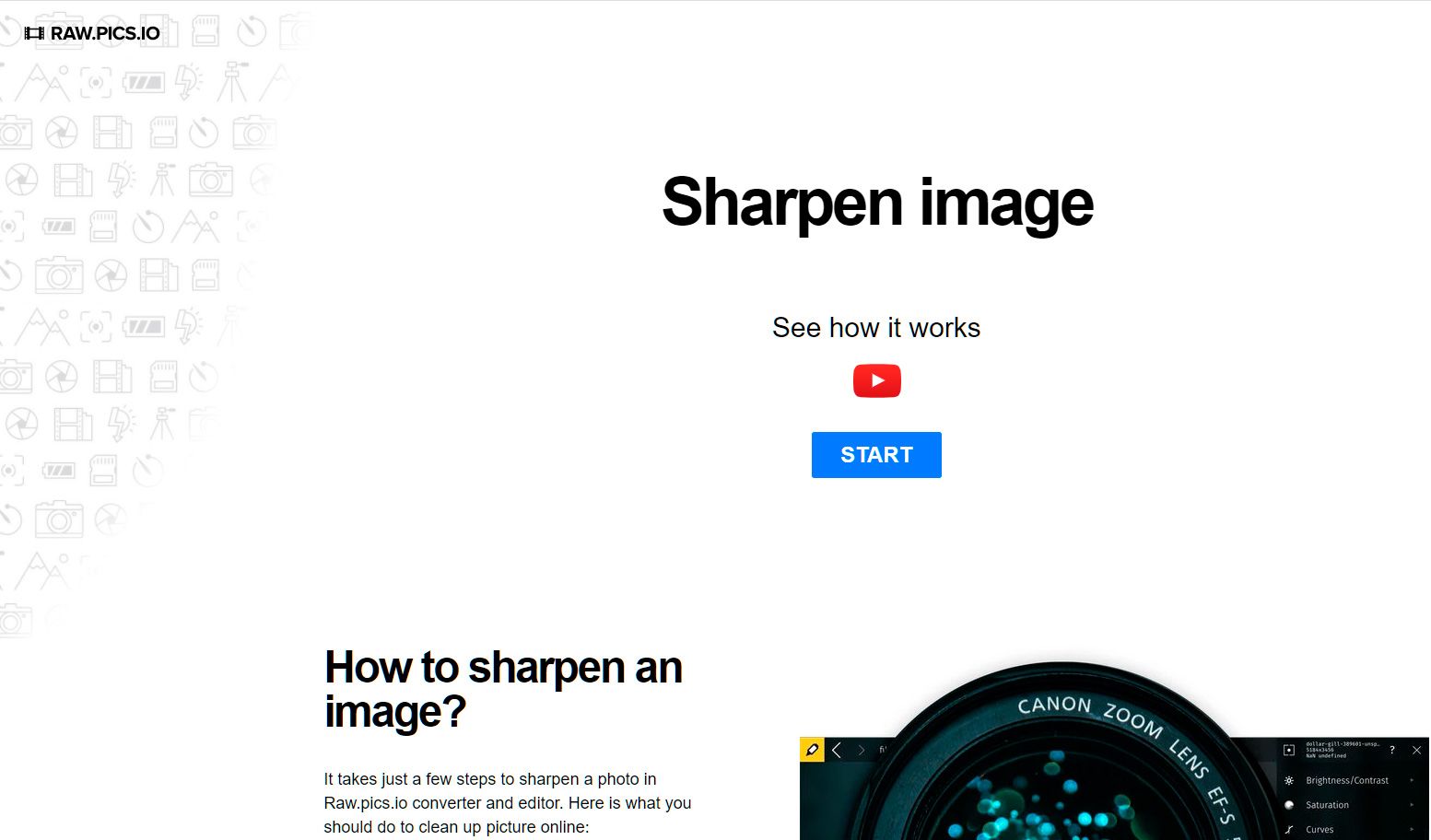 Upload the photo you want to edit and make sure it is selected for editing. 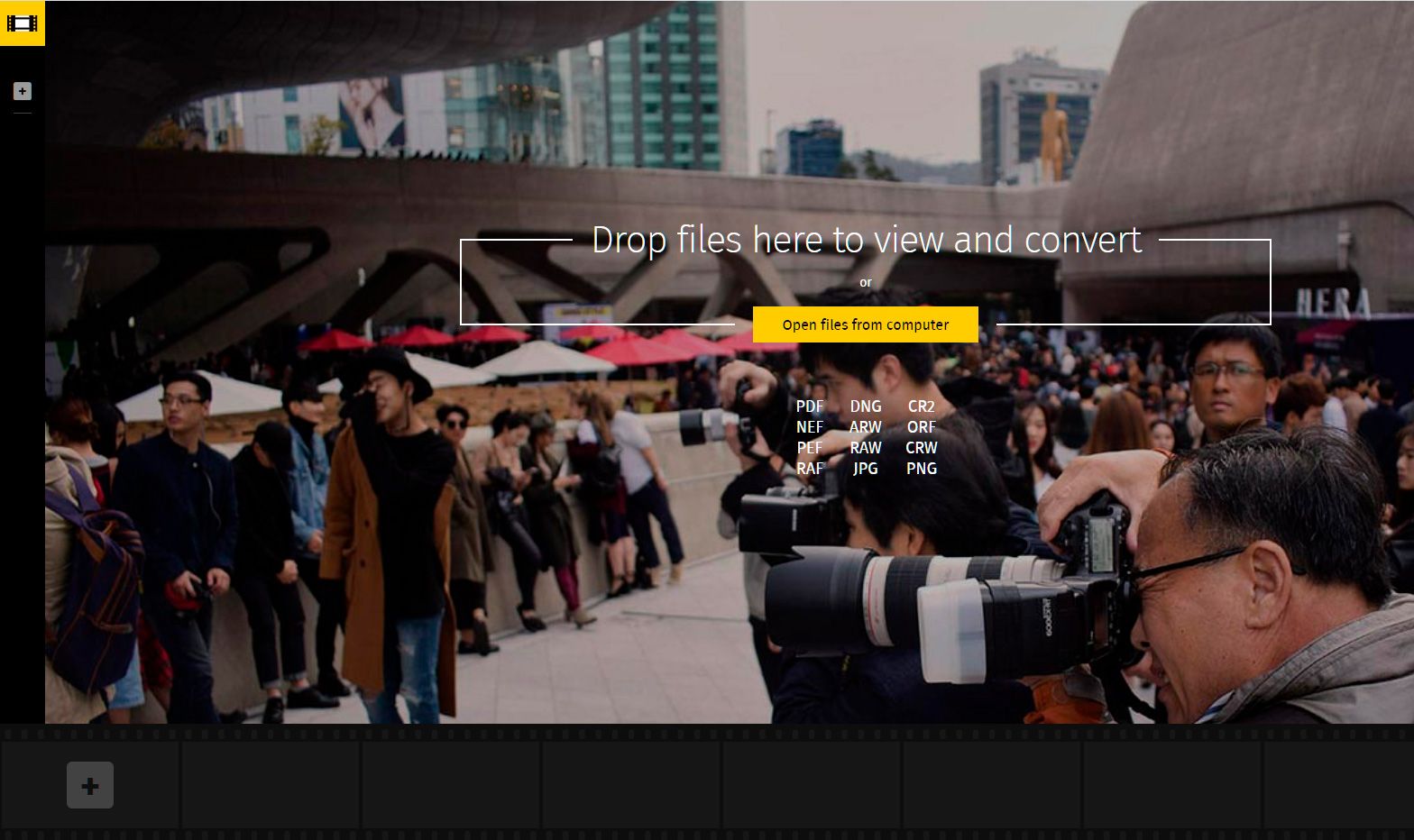 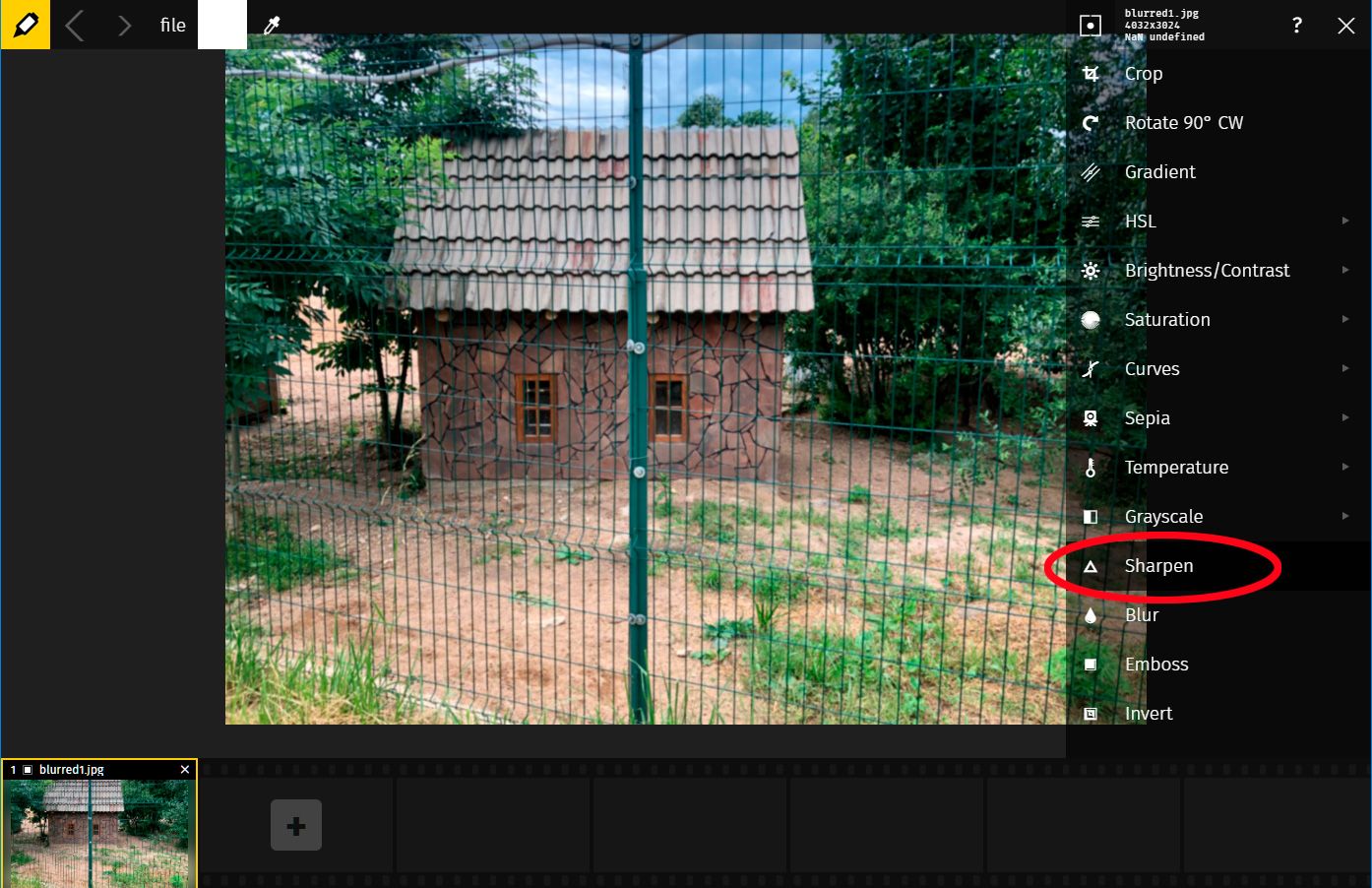 Make the adjustments as needed and save the photo.
Download for Free

LunaPic is another online image editing tool that can make a picture less blurry, but with dozens of more options. From exposure correction and basic filters to advanced layer masks and eraser tools, this program is very useful.
Under its Adjust option is the Adjust Focus slider, using which you can create pin sharp photos or even add blur, so as to give an out of focus or bokeh look.

While it may not be as advanced as the blind deconvolution technique of Easy Photo Unblur, it gets the job done for free, with only the following steps:

Use the link above to open the LunaPic editor. 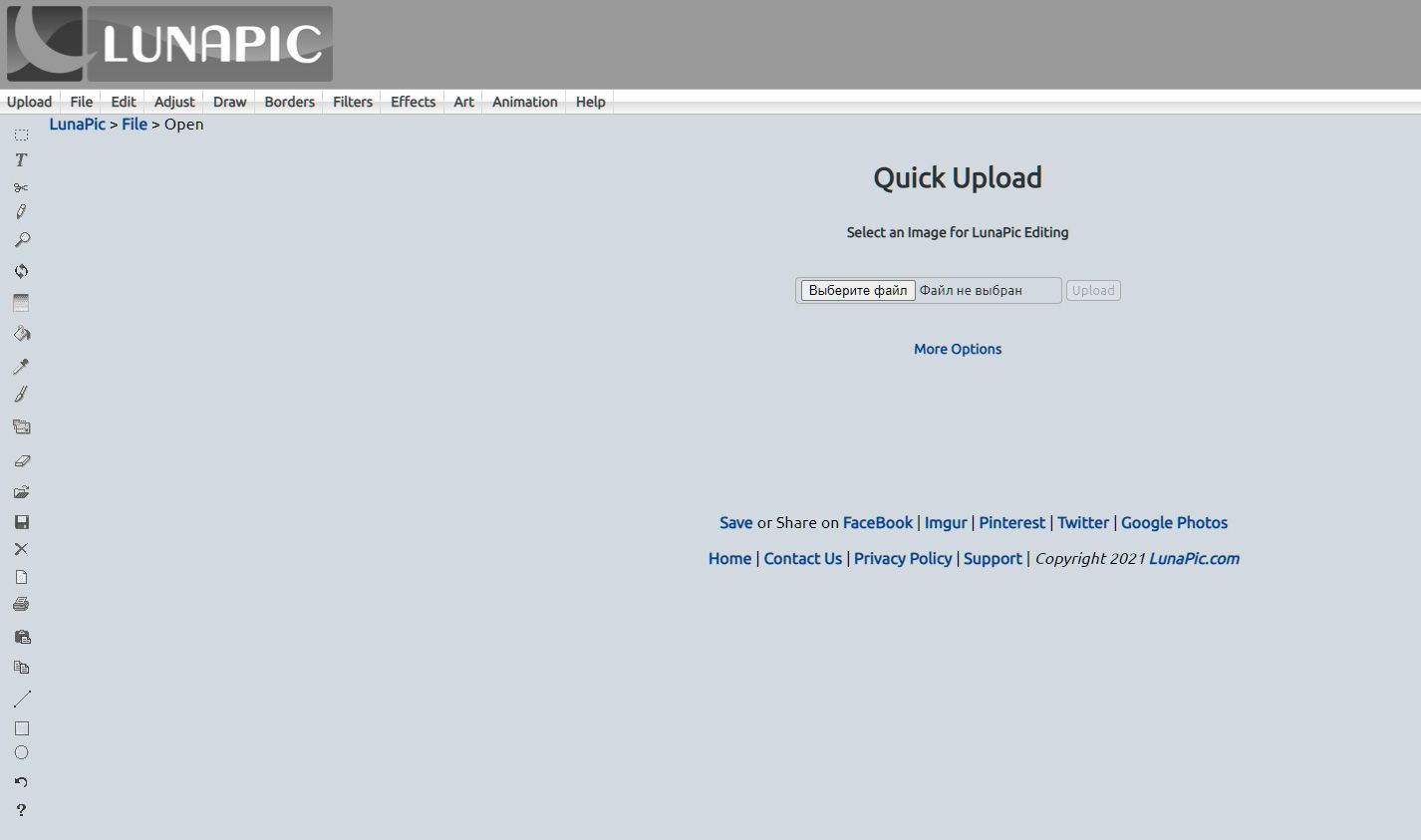 Upload the photo you wish to edit and click on the Adjust tab. 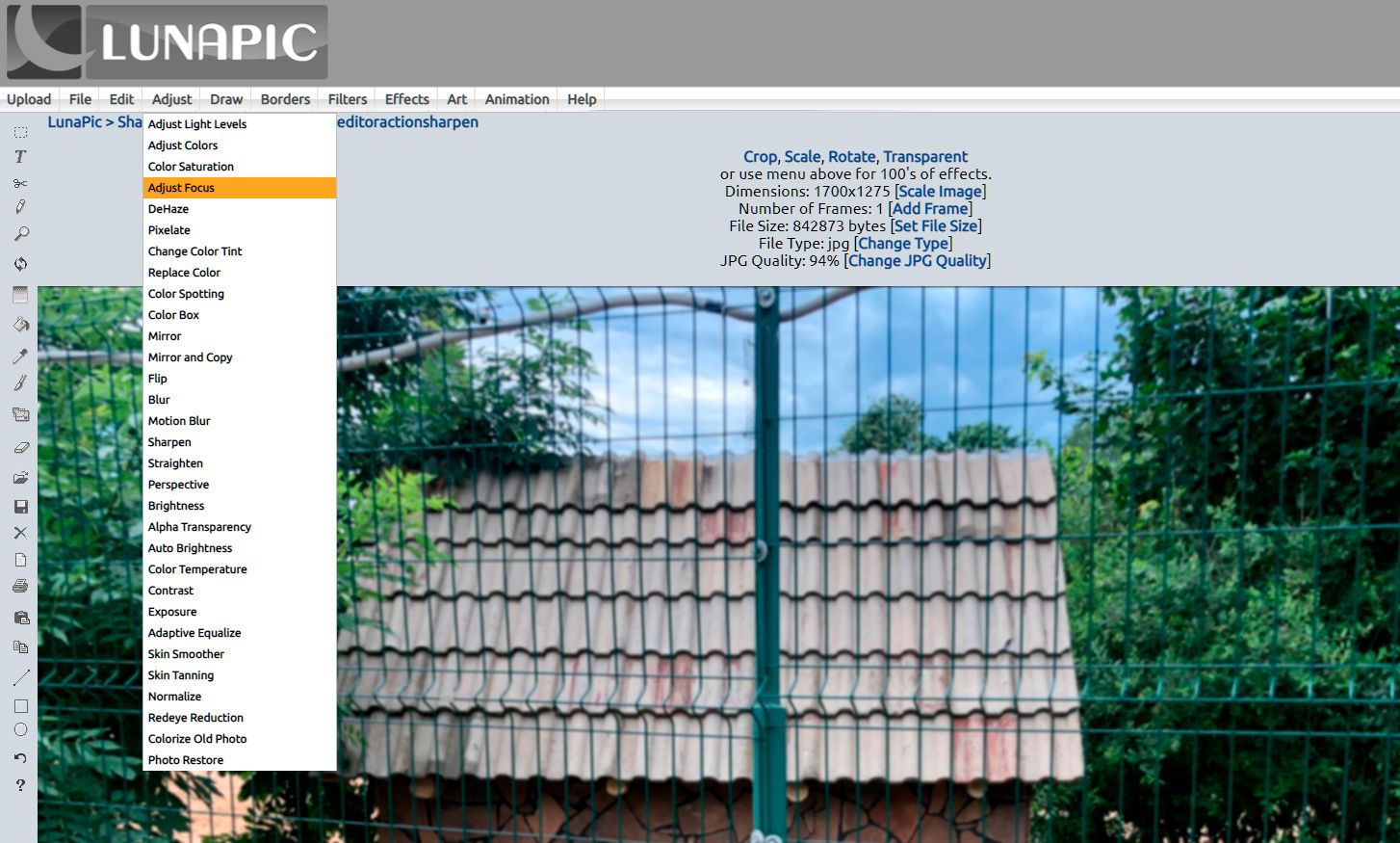 Click on Adjust Focus, which is the fourth option in the list. The focus slider will open. 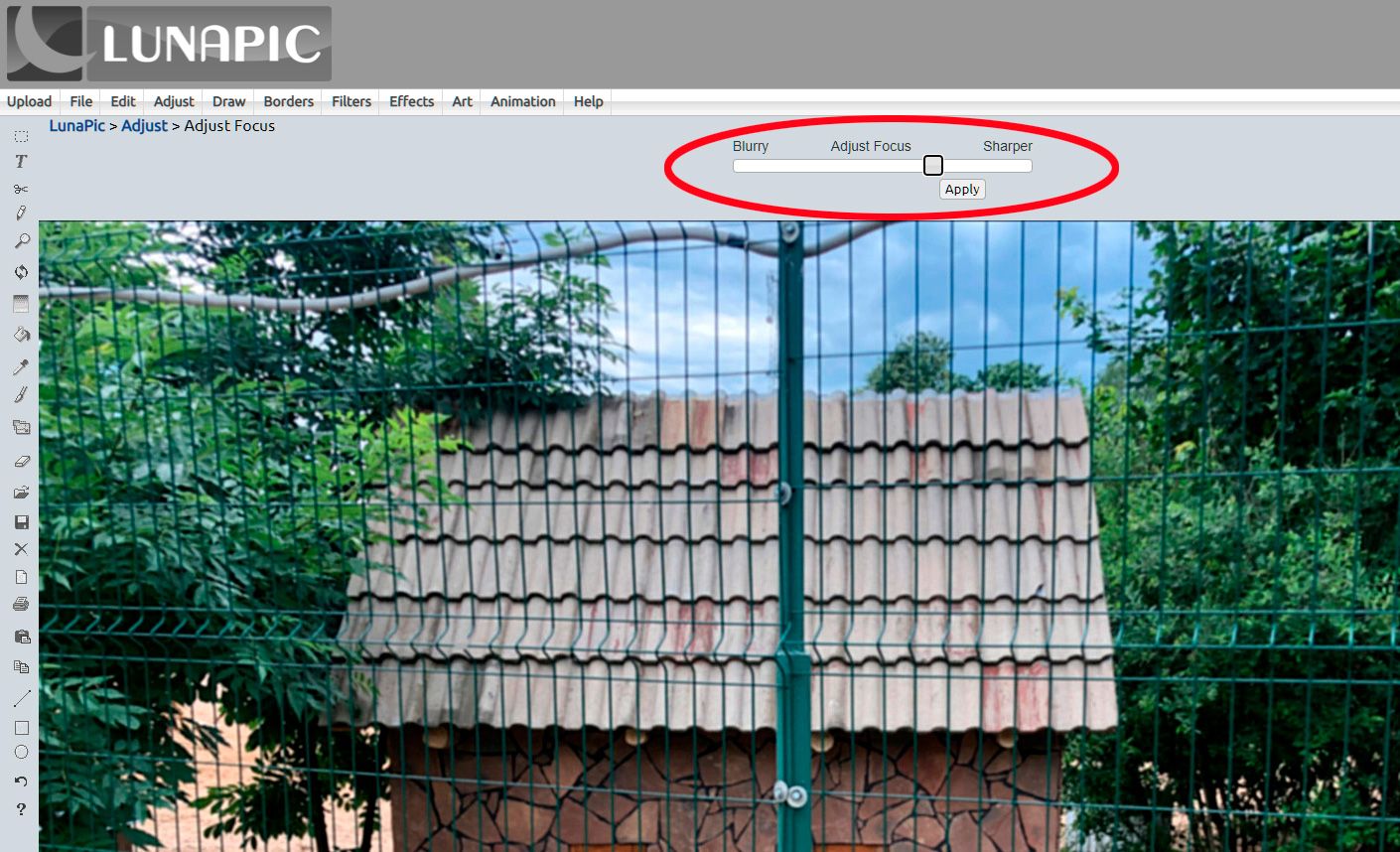 ❓ How to make videos less blurry?

Unfortunately, the Easy Photo Unblur software does not work on videos. However, you can check out apps like Remini Photo Enhancer, which adds sharpness to both images and videos.